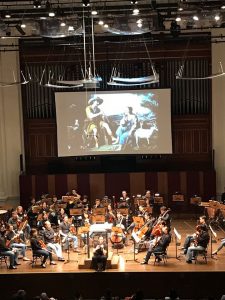 The Singapore Symphony Orchestra boasts several concert series targeted at diverse demographics – from chamber to orchestral, community engagement to gala events, and even interactive concerts appealing to babies and children.

Their Discovering Music series has always been a bit of a misfit, intended for the layman rather than the connoisseur but confused in whether its purpose is to educate school children or satisfy the curiosity of an older crowd.

Its chosen repertoire this season offers a possible clue as to its evolving direction : unlike previous years, where each ‘Discovering Music’ performance programmed short extracts of popular classics, each of the three offerings this season presents a single, larger-scale work. The first was Brahms’ Fourth Symphony – a work that, in its complexity, would have been a puzzling choice if the intention was to introduce the symphonic repertory to an audience for the first time. The work this time round – Berlioz’s Symphonie Fantastique – appeared to promise a more predictable route of discovery.

The SSO performed Symphonie Fantastique – under the baton of Kazushi Ono – just two days prior to their Discovering Music version conducted by Jason Lai. Comparisons are inevitable, but a much smaller stage (Victoria Concert Hall instead of the Esplanade Concert Hall) and a diminished orchestra (notably missing the Concertmaster and Second Violin Principal) meant that expectations were accordingly lowered, however unjustifiable that may be.

Jason Lai is, without a doubt, a most engaging presenter – whether on stage or on the television screen in his Okto, BBC and BBC World appearances. From the moment he walked onto the stage, he drew the audience in with his relaxed, affable style – addressing the audience as one might a group of old friends. And old friends – or at least loyal audience – they may very well have been, as one of the questions in the Q&A segment asked about his previous arm injury. Celebrities’ injuries fall prey to rumors like negligent hospital care. He playfully teased and chided in equal parts, inviting them to discover Symphonie Fantastique through his vivid story-telling, while animatedly explaining the idee fixe with the help of deftly-placed anecdotes and presentation slides that reminded one of MEP lessons. He also answered as many of the questions (submitted online) as he could – among them, “what are the plastic sheets above you for” and “how do you keep time without a metronome” – with a good dose of humour.

But what of the music? Did it successfully satisfy the curious concertgoer (as many adults as there were children) and effectively illustrate the tale of Reveries and Passions where art imitates life and vice versa? Unfortunately, the decision to leave out the 4th and 5th movements (likely precipitated by constraints of time and maybe – just maybe – for fear of scaring the children in the audience) meant that it was more infatuation than obsession. Nevertheless, it was an infatuation that was carefully woven, though the problematic acoustics of the VCH resulted in brass that came across too aggressive and violins that sounded more like insistent begging than lovelorn sighing. Ensemble-wise though, the 1st movement fit together more convincingly than it did at the Esplanade Concert Hall, which frankly had reminded me of a stereo system that was slightly out of sync. The 2nd movement, however, stumbled along awkwardly – more a methodical following of chalk patterns than the beguiling waltz that it promised to be. This same lack of refinement plagued the 3rd movement as well. The serene Scene in the Fields bordered on being too sedate, though Elaine Yeo’s cor anglais solo was delightful, as was Pan Yun’s offstage oboe reply.

On Friday, Ono and the SSO pulled off a most menacing thunderstorm – scarcely less threatening here – followed by fourth and fifth movements so exciting it felt like a controlled careening off a cliff. A pity, then, that the Lai-VCH version ended with the 3rd movement – it was like saving room for dessert, only to find out that there was none. Well yes, the menu (aka the very welcome yet under-appreciated programme notes) did make that clear from the very start, but it still left one with the taste of disappointment, unfulfillment and thwarted anticipation. Perhaps, in some mysterious alignment of the stars, the audience did end up experiencing something akin to what the artist must have felt in his unrequited affections for his muse.