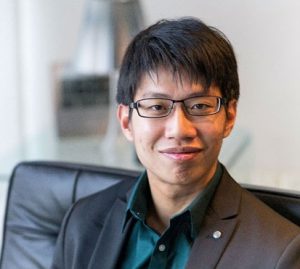 Once upon a time in Singapore, most classical music concerts were an Event, attracting media attention with little difficulty and resulting in capacity attendances. Today, with multiple performances vying for the attention of the concertgoers, performers and organizers have a more complex struggle for acknowledgement.

Last Sunday, Ryan Chow (right) gave a piano recital entitled “Antiquity through Modernity” at the Esplanade Recital Studio. With scant publicity, the rather young yet supportive audience hardly filled half the hall – unfortunate, since the recital was outstanding.

Mr Chow, Singaporean and currently a candidate for the Doctor of Musical Arts degree at the University of Maryland (USA), offered a rich and meaningful program that invited listeners to vividly experience two connected trends of the early 20th century – Neo-Baroque and Neoclassicism.

A friendly and informative verbal presentation, supported by Mr Chow’s own succinct program notes, helped to both welcome and guide the audience. The concert’s first half was dedicated to counterpoint and fugue, more aligned with sacred music; and the second half to dance forms, belonging more to secular music.

Mr Chow exquisitely steered sinuous lines from the meditative serenity of Reger’s Prelude towards a grand climax at the end of the Fugue. With little pause, he pressed on with the Glazunov, intelligently bonding the two works, written in the same key, implying a yin-yang relation. Where the Reger exemplifies J.S. Bach’s keen intellectualism and logic, the Glazunov exudes Bach’s fiery and dramatic side. This reviewer only wished that fires had raged more in the Glazunov.  Nevertheless, with clarity of intent and tone, Mr Chow appropriately adjusted his contrapuntal approach according to the composer: the Reger more cerebral and the Glazunov more instinctive.

Ending the concert’s first half was Alfred Casella’s Sinfonia, Arioso and Toccata, Op. 59. Composed in 1936, this was the most recently written work on the program. Mr Chow aptly captured the driving motor rhythms of the Sinfonia. The Arioso came with a dramatic, but effective, surprise: the house and stage lights went dark, leaving a single spotlight on the Mr Chow, who played the movement with compelling lyricism. With full stage lights back on, the gale-force motor rhythms resumed in the Toccata. However, the sonic winds did not quite reach cyclone levels, which would have made the Toccata all the more thrilling.

Two piano suites balanced off the two opening prelude and fugues to make for an attractive, well-balanced second half. Like the Reger/Glazunov coupling, the Poulenc and the Enescu also formed a yin-yang pair; the more restrained and stylized Poulenc playing off effectively against the more emotional and romantic Enescu. Written in seven movements, Francis Poulenc’s 1935 Suite Française, inspired by 16th century French composer, Claude Gervaise, also exists in a version for an ensemble of 12 instruments, including harpsichord. Mr Chow aptly performed the solo piano version with simple, understated elegance. The overall palette of colours could perhaps have been more varied, yet each movement was played with charm, tastefulness and wit. Each of the seven dances (Bransle de Bourgogne, Pavane, Petite marche militaire, Complainte, Sicilienne and Carillon) was stylistically rendered with appropriately characteristic rhythms. 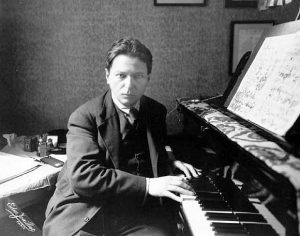 Georges Enescu’s (left) Piano Suite No. 2, Op. 10, written between 1901 and 1903, comprises four movements: Toccata, Sarabande, Pavane, and Bourrée. With the poetic Pavane poignantly played, again under a single spotlight, Mr Chow built the Enescu as a glistening fortress of sonic beauty. Each movement was crafted with pristine detail. Nonetheless, greater bravura and spontaneity, a more internalized ‘wow’ factor would have made the overall arch of the recital even more vibrant.

However, this was redeemed in the surprising encore, a return of Enescu’s Toccata. Ever more charged with brilliance, it helped along with most of the Enescu Suite to deliver a fulfilling evening’s conclusion in glorious D major as a profoundly intelligent ‘Picardy Third’ to the darker quality of D minor in the opening preludes and fugues.

“Antiquity through Modernity” was a success; entertainingly, intellectually, and spiritually a satisfying whole; even symmetrical according to the aesthetics of 18th century European classical music! Let there be more from Ryan Chow. Considering his sophisticated pianism, keen intellect and musicality, the future for him looks bright. Hopefully, he will often return to Singapore and share more of his art, his soul.