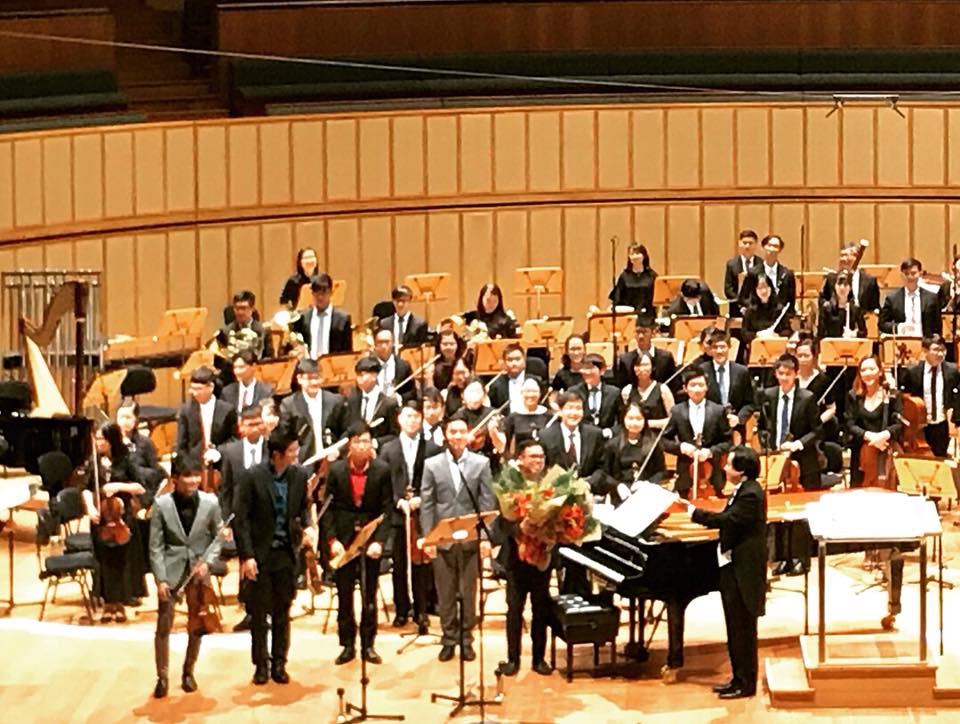 The Orchestra of the Music Makers (OMM) has always been generous in their concerts – sometimes to a fault. Once, for example, it repeated as an encore the whole of ‘Jupiter’ after a performance of ‘The Planets’ – a decision that, much as I like the movement, made me groan, though the jovial performance that followed quickly dispelled that.

This, their tenth-anniversary concert, was a mixed bag where I felt more selective programming could have resulted in greater dividends. Everyone performing tonight, soloists included, was either a current or previous member of the orchestra. Dvořák’s Carnival Overture was a nostalgic nod to their first-ever concert. Played at a furious tempo, the strings conquered the taxing music in an energetic performance that came off less Slavic, more festive. A pity, then, that they were sometimes swamped by the eager brass.

Two orchestral versions of excerpts from Wagner’s Ring were presented. The famous Ride of the Valkyries fared better, with crisp rhythms from the brass over the busy string-work driving the piece forward, though the trombones, coming in just a split-second too late each time, were a fly in the ointment of an otherwise attractive performance. Less effective was Chan’s lugubrious take on Siegfried’s Rhine Journey, where the chosen tempo and blunt articulation made it feel like Wagner’s hero had been travelling through a river of molasses. More moulding in the early cello lines, more flexibility, and more responsiveness to the conductor, in general, would have brought life to this performance since most of the notes were already in place. That said, there was a real bloom to the strings and the winds were nicely characterized. 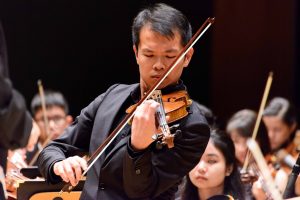 Another performance that could have used more verve was Australian Chamber Orchestra member, Ike See’s (right) Korngold violin concerto. Playing on an Amati, See’s musicality shone through in intelligent, thoughtful phrasing, supported by a grounded technique that was unfazed by Korngold’s double stops and rapid fingerwork. But the conductor’s tendency to indulge in the lush, Puccini-esque orchestration kept tempi – and the piece – from taking off and hampered its freewheeling, swashbuckling Americana nature. This was most evident in the last movement’s hoedown rhythms, where the soloist could definitely have taken more risks, given his technical security. 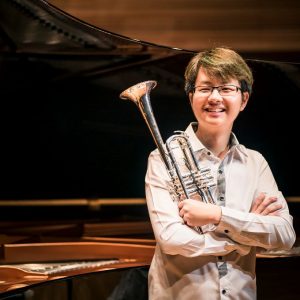 Perhaps the biggest wildcard of the evening was Jonathan Shin’s concerto for two violins, piano, flute and percussion, Siginnah!, roughly translated as ‘Naughty Boys!’. In three movements (Siala!, Tendresse and Lorong Jig), Shin’s piece, written for his band, the Lorong Boys, began with slapstick antics that had the missing pianist (Shin himself) running out with a toilet paper train after everyone else had already started. I’m all for the witty use of humour, but this felt like … toilet humour. Besides, the piece didn’t need it. Between the pseudo-Shostakovichian flights of fancy, tango beats and other pastiche, there was enough musically to keep things interesting and there was a fairly organic, seamless flow to the composition, with effective writing in the solo parts that often played together, concerto grosso style, to keep me interested. 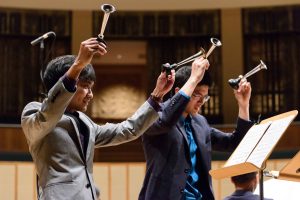 The unusual set of solo instruments, especially the extended percussion section, replete with bongo drums and marimba, allowed Shin to explore textures more usually heard with a symphonic band, juxtaposed with the orchestra – for example, in the opening of the second movement, where the marimba thrummed movingly against strings, followed by a lovely cello solo. A schizophrenic flute solo interlude linked the first and second movements – a nod perhaps to the fifth Brandenburg, which the composer says was an imitation of the Asian koel’s call. The concerto culminated in a freewheeling finale, which used the cry of the karang-guni man as its material, with the soloists playing a set of karang–guni horns (right), PDQ-Bach style, and ending in a burst of joy.

All that was left was for Mexican composer Marquez’s sensual Danzon No.2 – played ‘straight’ but not without abandon – followed by a medley from Disney’s ‘Beauty and the Beast’ to round off the evening. Here’s to another ten years!