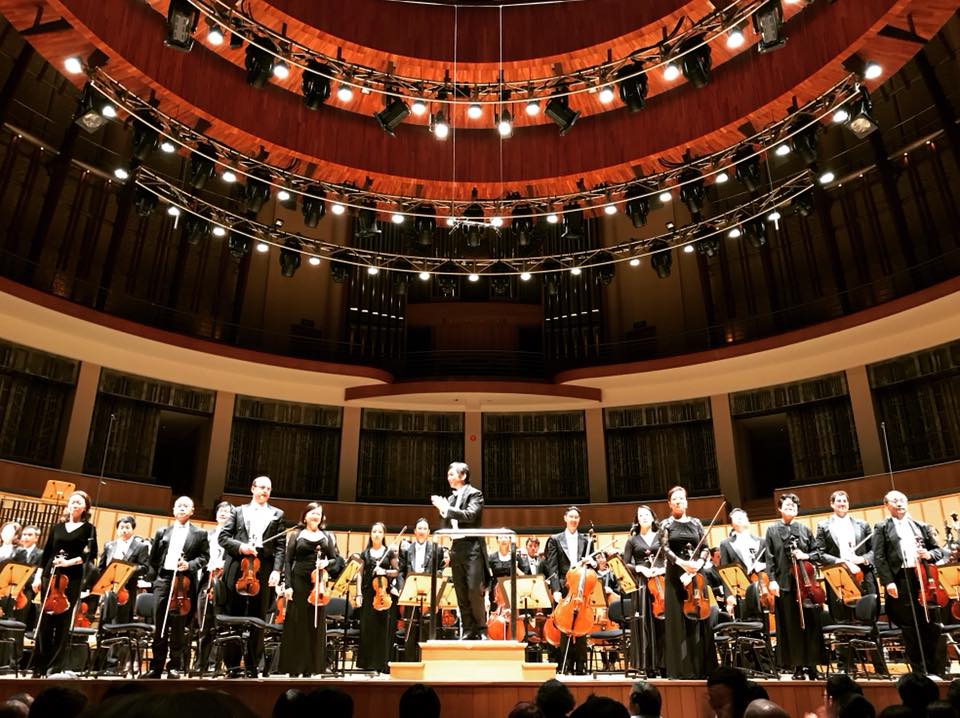 ‘The symphony must be like the world – it must contain everything,’ said Mahler famously to Sibelius, who himself strove for ever-increasing concision and concentration. But Mahler’s symphonies have their own rigorous logic, which conductors ignore at their peril. Miss the overarching structure of the work and the performance will fall flat. But what is the narrative in Mahler’s seventh symphony – frequently felt to be his must elusive?

In his third performance of this symphony with the SSO, Lan Shui’s approach was to treat it as concerto for orchestra and to let the orchestra’s committed playing shine through.

Despite a tentative, expansive start which lurched from episode to episode, the SSO found its bearings in the eye of the hurricane (‘Ziemlich ruhig’), which was utterly magical, discovering heartbreakingly ravishing colours and emerging settled and confident after. As if improvising, Shui stretched out the stratospheric string passages that followed, broadening it progressively until the opening march’s return. Elsewhere, virtuosity was the order of the day, with brilliant contributions from horns, trombones, percussion and just about everyone else, capturing majesty and mystery in Mahler’s depiction of Nature, as well as sparkle and swagger in its orgiastic closing passages.

Shui’s approach to the three middle movements (effectively a trio of night-music pieces) couldn’t have been more different. As if rejecting the neuroses of the sixth symphony that spilt into the seventh, his readings were firmly Classical. He made them feel like ephemeral, nocturnal visions, rather than heavy tableaux. It was all surprisingly restrained, and all the more effective for it.

The first Nachtmusik was charmingly played after the opening bird call passages, allowing the musicians to play their avian exchanges sans conductor, only stepping in to lead the buildup to the romantic main theme. Here, he found humour in its jaunty marches, with the cowbell episodes evoking a lonely Alpine landscape in contrast.

The witches of the Scherzo were likewise glamourous creatures of the night, dressed in flowing evening dress and high heels, not in the least frightening, with rapturous playing from Zhang Manchin’s viola (she’s due to play the Walton on 26 Jan) balm to my ears.

The second Nachtmusik can sometimes feel like a tear-laden affair, but the troubadours with their tinkling mandolin and strummed guitar (played by Stephen Lalor and Gregory Pikler respectively), together with Shui’s brisk tempo, kept this light-hearted, the evening’s air ripe with potential.

The change from night to day in the last movement has often been criticised but Mahler’s gradual lightening of mood from the darkness of the first movement makes the Finale’s blaze of sunshine (in C major, no less) an inevitability. I don’t buy the quasi-Shostakovich sardonicism that some conductors bring to this movement – Mahler himself described the symphony as cheerful, so why second-guess him? As if Mahler was always slit-wrist gloomy!

Christian Schiøler led the charge with heroic timpani work, straight into the brilliantly played Rondo chorale theme on the brass, taken at breakneck speed. This complex movement can be challenging to bring off at the best of times, but Shui kept everything humming along nicely through the multiple transitions, the orchestra mustering its resources at the end of a tiring evening to bring its A game, with lots of Viennese charm and instrumental colour. Particularly effective were the mid-movement collapse, with the themes falling apart, and Turkish march segment. Tempos were often brought to impossible speeds, but everyone rose to the occasion with vitality – leading up to the final passages, where Shui took Mahler’s a tempo marking at face value after the huge ritardando, delivering an injection of energy that brought this symphony to its riotous conclusion. What a way to kick off 2018!