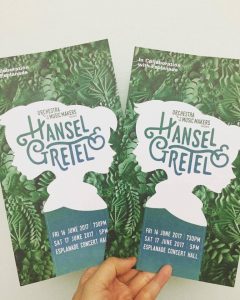 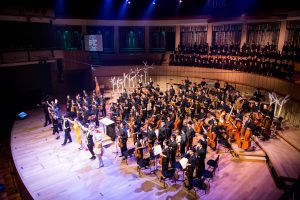 Mention “opera” and words that come to the layman’s head include “inaccessibly high-brow”, “excessive melodrama”, and “large people singing with shrill voices in baffling foreign languages”. Well, the Orchestra of the Music Makers’ first foray into opera, Engelbert Humperdinck’s Hansel and Gretel, was none of the above. Shorn of the original Brothers Grimm’s darker elements, the magical fairytale was brought to life by Maestro Chan Tze Law, alongside Director Edith Podesta’s ingeniously humourous and surprisingly relatable staging. Best of all, it was sung in English, with surtitles to boot.

The trend with opera seems to be to examine everything from Freud’s couch and Hansel and Gretel is no different: Why does the singer who plays the children’s Mother also play the role of the Gingerbread Witch? What exactly does the Gingerbread House represent?

But Hansel and Gretel is opera-lite and while more serious themes still abound, Podesta chose to downplay these for a more family-friendly June-school-holiday version. The performance attracted a younger crowd than usual, with chattering and sudden exclamations by children in the audience not only forgiven but welcomed, adding to the spell cast on the Esplanade Concert Hall. These budding arts patrons laughed at Gretel’s attempt to balance on one leg, clapped loudly at the family reunion, and some even wailed in terror during the eerie scene in the dark woods.

For the grown-ups, the question had always been, how would this be “semi-staged”? While the Singapore Symphony Orchestra avoided staging entirely with their concert version of Carmen, OMM’s rather more ambitious undertaking was met by concert-goers with anticipation and not a little skepticism. 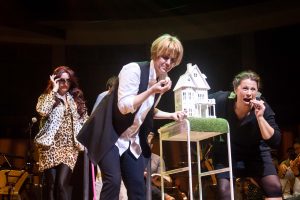 Hansel and Gretel and the Gingerbread House

They needn’t have worried – the result was astonishing. Staging was minimal, but surprisingly effective, pushing the music into the spotlight instead of distracting with extravagant props or lavish sets. The Gingerbread House, central as a macabre manifestation of the siblings’ sweet-toothed desires and an alluring symbol of irresistible temptation, was tiny, but no less significant for that. The broom-maker’s house was represented by a table and two chairs, while ribbons of coloured light served as the woods. Smoke – green for menacing dessert creation and red for the furnace – curling out from either side of the stage in Act 3 was alarmingly effective in inducing a sense of dread..

From the quaint projection against the tablecloth of the two children immersed in shadow puppetry under the table, to the blinking lights when the Witch’s spell was broken, every direction and tableau lent significance to the music and plot. More seasoned opera connoisseurs might sniff at its simplicity, but the imaginative use of simple sets and space, bathed in psychedelic yet unobtrusive lighting, brought to life Hansel and Gretel’s world most cleverly – kudos to all. The Concert Hall was itself used creatively to its full capacity, with Father appearing from the back of the Foyer Stalls to Hansel and Gretel exploring the woods via the Choir Gallery. 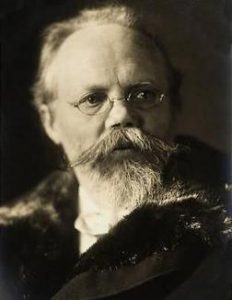 Humperdinck’s music can best be described as delectable – hum-worthy melodies swirling around lush harmonies that would not be out of place in a blockbuster film score. Listen a little closer though, and influences of his teacher, Richard Wagner, from subtle inflections and interweaving of tunes building to the towering orchestral climaxes, are evident.

Chan indulgently underlined these similarities in a performance that featured lush swells, elegant solos (especially in the cello). He effortlessly weaved Humperdinck’s rich score, despite some hesitant entries in the overture that took a while to shake off. His balance of orchestra against singers was delicate, almost loving, showing off the ensemble’s expressiveness through a whisper-soft piano when Mother sang of her frustration, to a more forceful commentary between her lines, building up finally to the climax when the milk was spilt.

In some passages, enthusiasm and inexperience got the better of the orchestra, leading it to drown out some of the singers (the Act I siblings’ dance comes to mind), with the brass being the biggest culprits. Elsewhere, there was some unevenness in the more fervent crescendos and the pizzicatos came across more jagged than buoyant, with the violins being particularly more restrained overall. Despite these hiccups, the 87-strong orchestra more than proved its mettle and succeeded in supporting the singers most effectively. Still, the orchestra was perhaps best enjoyed on its own, with a particularly satisfying Act 3 introduction that reminded the audience why OMM has been described as one of Singapore’s finest.

OMM’s fine international cast of soloists was equal to the challenge. Australian mezzo-soprano Caitlin Hulcup’s swaggering, oft guttural-sounding Hansel was met with giggles (possibly from young audience members tickled by the sight and sound of a grown woman acting as a prepubescent boy), though the sense of bravado and protectiveness over his sister failed to come through. German soprano Felicitas Fuchs’ portrayal of the optimistic and slightly wilful Gretel was charming. Not only was her body language characteristically childish, but her tone also took on an air of petulance and later, worry and fear – one could almost hear her furrowed brow. While individually impressive, their Act 2 Evening Prayer duet was far from comforting. The harmony was pitch perfect, but the balance and blend sounded more like they were singing against rather than with one another. Thankfully, their Act 3 duet was much more effective and demonstrated their glee and wonderment with the Gingerbread House delightfully, and in one accord. 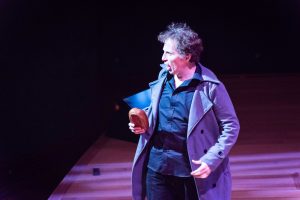 Mr Warwick Fyfe as the Father

Warwick Fyfe’s booming entry as Father from the left of the Foyer Stall immediately endeared him – drunk and unsavoury as the character may be – to the audience. His voice resonated throughout the entire Concert Hall – unapologetically strong and majestic, yet always in character. In truth, there was too little of Fyfe in this production and one wished that he had more stage time, though the role of Father did allow him the room to express a myriad of emotions, from drunken glee to smug pride to sober, solemn telling of the Witch’s story. 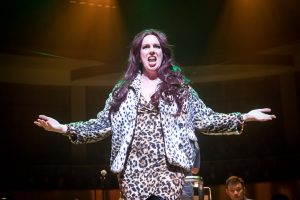 The curtain call’s loudest cheers were for Fiona Campbell (read Aileen Tang’s 5 minute interview with her here), and they were well deserved. Campbell played two roles, that of Mother and the Gingerbread Witch, and it was in the latter that she really dazzled. This was no old crone with a wart-infested crooked nose a la Disney witches, but rather a seductive personification of predatory evil clad in leopard print. Campbell walked a fine balance – sassy, saucy and inviting in her lure, with the occasional growl that hinted at the glamourous-looking Witch’s true malevolent nature. The audience erupted at her rock star moves, especially when she claimed Chan’s baton and proceeded to conduct the orchestra (which, according to the orchestra, she actually did). The effect was seamless and impactful. This was certainly one villain the appreciative audience loved to hate.

The Singaporeans in the supporting cast held their own, though unclear diction at times had one glancing at the surtitles. Evangeline Ng was an appropriately sweet-voiced Sleep Fairy but had some projection issues, causing some phrases to seem interrupted. Rachel Lim as the Dew Fairy also tended to have slightly muddied enunciation, with many of her words lost in her call to dawn. The relatively young – in many ways – Volare Treble Voices directed by Chorus Master Darius Lim lent an additional ethereal air, with the pure tones of the children’s and young women’s voices sounding fittingly innocent. Aurally, the choral entries were quite magical, but the choreographed hand actions unfortunately distracted from the overall panorama.

Far more effective were the humourous touches, in keeping with the light-hearted fairy-tale approach, with some customized specially for the Singaporean audience. Father carting plastic bags from Cold Storage was met with raucous laughter (was Gretel’s fantasy of “beef with noodles” actually stir-fried beef hor fun?). Perhaps unintentional were the sniggers drawn by the Dew Fairy’s unfortunate chicken costume (surely meant to be a rooster signaling the dawn?), with adults in the audience chiming in with “kok-kok-kei” (literally “clucking chicken”).

One also wondered if Hansel and Gretel were eating real cake on stage and how that poor (or lucky!) person in the front row must have felt at having bits of (supposed) meringue and black forest gateau pelted at them. Real confectionery or not, the opera’s conclusion was a feel-good happy ending for all – not just the Brothers Grimm’s characters but certainly also for the the audience who left the Concert Hall humming tunes, their collective musical sweet tooth satisfied.