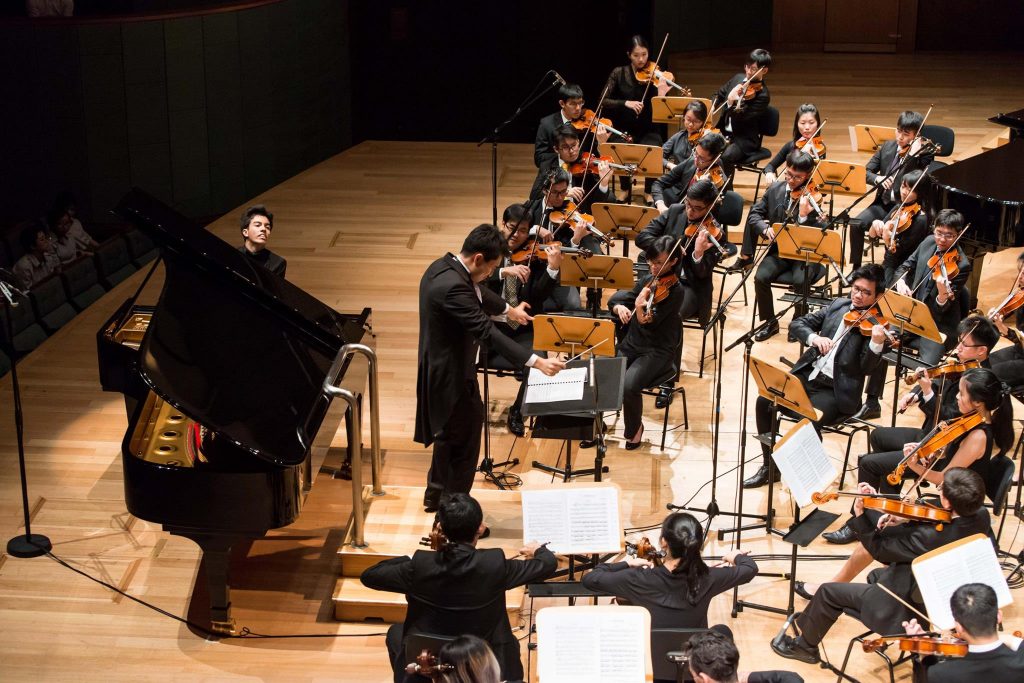 The OMM’s first concert of 2017 was a bit of a mixed bag. Expectations ran high for 18-year-old Malaysian pianist Tengku Irfan’s performance of the Rachmaninoff third concerto. While he did not disappoint technically, he missed the woods for the trees, often trying too hard to get every last note to articulate and sound, leaving this reviewer with the feeling that he had not quite transcended the fiendish technical difficulties of the piece to find its music.

Beginning with a slower than usual tempo, he and associate conductor Seow Yibin seemed to fit hand-in-glove, perhaps a little too well, with Irfan taking a back seat in what should have been a whirlwind ride. Embracing the chamber-music aspect of the piece in the toccata-like torrent of notes following the statement of the first theme, his performance was self-effacing to a fault, rarely striking out on his own in a flight of Rachmaninoff-ian fantasy, molding phrases or presenting any fresh ideas.

While this approach might have been more acceptable with another composer, here it proved dissatisfactory.  The music thrives on the development of tension between orchestra and soloist, but there was little of that to be found here ; it was as if no one wanted to take the wheel.

All this made Irfan’s sudden assertiveness and power in the first movement cadenza all the more surprising. Here, he gave a brief glimpse of just what he was capable of once he had loosened up and started to enjoy himself. He was in his element in a perfectly shaped performance with frighteningly large sound, no-holds-barred virtuosity, and especially startlingly, a more fiery temperament than he had ever displayed before. Had a Klaviertiger finally been unleashed?

Sadly it was not to be. Shades of what could have been slipped through especially in the Intermezzo solo passages – the performance’s high point — with particularly lush climaxes from the orchestra and lovely, singing tone from the soloist, but fantasy was elsewhere in short supply. Later, the repeated-note section was notable for its extreme accuracy, but Irfan again chose to play safe, leaving this reviewer wanting more. Despite having all the notes, the third movement, at a measured pace, again displayed little temperament. It was technically flawless, but where were the sparks, the fire, the storytelling? Seow had to shoulder part of the blame here – less reticent conducting would have gone a long way.

Far more engaged were Seow’s readings of the orchestrated four Rachmaninoff piano preludes, which preceded the concerto. Alexander Oon’s were my runaway favourites, with lush, idiomatic arrangements and counterpoint in Op. 32 No.3 reminiscent of the composer’s second piano concerto. The more famous Op.23 No.5 was less percussive than the piano original but no less effective for that, with echoes of Mussorgsky-Ravel. The orchestra could have been more rhythmically incisive, but that didn’t detract from Oon’s inspired use of tremolo strings in the central episode and pizzicato to build up to the coda, which mimicked a huge balalaika orchestra.

Darren Sng’s Op. 23 No.1 was no less enjoyable, with some Shostakovichian tragedy in the climax, topped with shimmering strings adding some optimism at the end. Phoon Yu’s Op. 23 No. 3 was the most conventional of the lot, but with creative sprinkles such as a lovely passage with solo violin, played by concertmaster Chan Yoong Han, adding interest.

Saint-Saen’s Organ Symphony formed the second half of this evening’s program. If Seow Yibin had been hands-off in the Rachmaninoff concerto, here his detailed approach to the French composer paid dividends, with a radiant performance that had the complete measure of the work. The difference was as night and day, with committed ensemble playing from the Orchestra of the Music Makers from the outset and plenty of verve from the strings.

Feverishly whipping up the music à la Charles Munch was not his style; instead, he unfailingly navigated his way through the symphony’s novel structure and coaxed beautiful playing, especially from the winds. Joanna Paul’s organ’s entry in the Adagio equivalent was passionate, yet chaste, with a lovely sheen from the strings and there were many moments of spine-tingling beauty. Better yet, everyone seemed to be listening for one another, even if in the climaxes there were perhaps too many strings for the delicate Esplanade organ to shine through.

The Scherzo-equivalent was energetically played, at a nicely chosen tempo that allowed a basic cheerfulness to emerge in the contrasting trio (lovely piano!). All that was left was the glorious Finale, marked Maestoso – grandly taken, with the organ really making its mark here. The orchestra remained engagingly responsive, truly earning the blaze of triumph with which Saint-Saens capped his forays into the symphonic genre. A performance to cherish and remember.