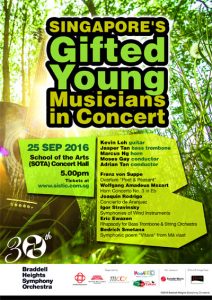 For many years, BHSO’s biennial Singapore Gifted Young Musicians series has provided a platform for our young talents to gain experience performing as soloists with a large orchestra. This evening’s concert showcased three instruments not often seen in the spotlight: the horn, guitar and bass trombone.

As is the norm, the orchestra began with an overture, and this one came from Franz von Suppe’s earliest operetta Poet and Peasant, written for Karl Elmar’s comedy. Unfortunately, even before the first notes arrived, a harsh ambient noise filled the hall. A speaker was malfunctioning, or an overly sensitive monitor was misbehaving. Perhaps distracted by the possibility of what sounded like an invasion by a swarm of beetles, the musicians started timidly; principal cellist Xiang Hong’s solos were audibly anxious as she competed with this unexpected intruder for attention. 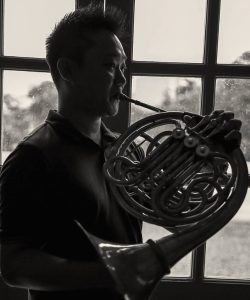 Despite the lacklustre orchestral introduction, Marcus Ng (right) strode in confidently, but within a few notes into Mozart’s Horn Concerto No. 3, he too was struck with anxiety. One could easily tell that he had prepared a bag of ideas, but revealed only a couple of them. Tension soon derailed him, and the orchestra also struggled to maintain their rhythmic precision. 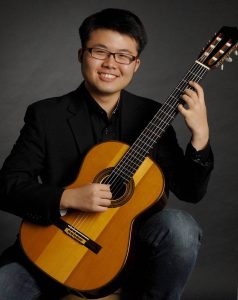 Conductor Adrian Tan, as expected, stepped into his emcee role to introduce guitarist Kevin Loh (left), who has already made quite a name for himself here. After giving a short introduction of Joaquin Rodrigo’s Concierto de Aranjuez, the guitarist soon realised that he too would fall victim to the sound system unless the issue was quashed once and for all. A minute of futile effort later, the conductor and soloist exchanged shrugs, and launched into what sounded more like a “guitar karaoke” rather than a concerto. No amount of finesse in the music could bring the audience out of the doomed soundscape.

At last, Adrian found the culprit, and asked the sound crew over his microphone to halve the sensitivity of the monitors. It was an embarrassing move for the SOTA sound crew, but a desperately needed one. Finally purged of all distractions, Kevin Loh gave a dazzling display of musicianship, and together with a revitalised orchestra, delivered a satisfying conclusion to the charming Concierto. Pleased with the warm applause, Kevin rewarded the audience with the choice of a fast or slow encore, and most in the crowd chose to hear Albéniz’s famous Sevilla.

Stravinsky’s Symphonies of Wind Instruments was confusing, to say the least. An outlier in this concert of more popular works, it did not fit the atmosphere or the theme, and resulted in a large and unnecessary movement of chairs. It did not help that the performance was dull at best. 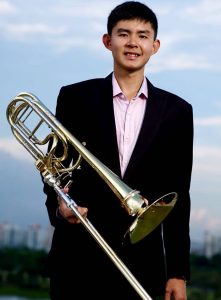 While Kevin was probably the most celebrated of the three, Jasper Tan’s (right) performance of Eric Ewazen’s Rhapsody for the Bass Trombone and String Orchestra was undoubtedly the highlight of the night. Jasper did not hesitate to show off his colourful tone and dramatic ideas, so much so that I was surprised by the versatility of the instrument multiple times. There was no lack of virtuosity in his playing either. Though Ewazen did not score any memorable tunes into his music, Jasper was mesmerising till the very end.

The orchestra wrapped up the evening with a simple rendition of Smetana’s Moldau. Though the concert was riddled with imperfections, it was nonetheless a privilege and joy witnessing our young talents delivering world-class music through this humble initiative. I would definitely keep an eye out for the next SGYM concert in 2018.