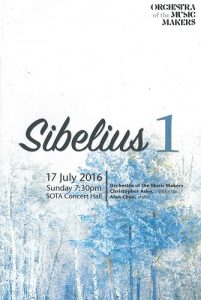 This interestingly programmed concert saw the Orchestra of the Music Makers in their first Sibelius symphony outing, as well as rare Singapore performance of Elgar’s tone poem ‘In the South’, under English conductor Christopher Adey. It’s tempting to draw comparisons between Adey’s interpretations and that of conductors he might have played under in this repertoire at the London Philharmonic and Hallé Orchestras (the Elgar and Sibelius would have been classic Barbirolli repertoire), but since a number of years have since intervened, it’s best to take tonight’s performances on their own merits.

‘In the South’ is Elgar in his most unabashedly Straussian mode, and benefits from a conductor pushing the music along. There was excellent bloom in the violins (aided by the somewhat wet SOTA acoustics), with fairly middle of the road tempi. The orchestra’s commitment to the music and attention to Adey were unmistakable. However, greater risk-taking could have helped give some excitement to this sunny music, and sounding less overblown and indulgent. 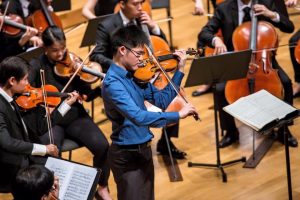 26 year-old Alan Choo (right) is a gifted but unassuming violinist, receiving most recently an Excellence in Early Music Award from the Peabody Conservatory. Musical to a fault, his general approach of the Prokofiev second concerto was to treat it as chamber music, playing with the orchestra rather than against. As is often noted, the first movement’s soloist/orchestra interplay is a civilised one, but it still requires the soloist to strike out and guide the transformation of the main theme. Choo too often took a back seat in this regard. There’s a built-in witty mischief to Prokofiev’s spiky rhythms and cool melodies, as well as a darkness that’s never too far away in this shadowy music, that Choo’s playing, technically secure though it was, missed out on.

Where he shone was the lyrical Juliet-like theme of the first movement, as well as the sweetness of the second movement’s main theme, taken here with little regard for irony. Here, Adey’s attentive accompaniment provided a solid surface upon which the soloist extemporised, leading into the rondo-finale. Choo’s playing brought out the dance in this Spanish-influenced music (with castanets!); this movement was perhaps just a bit too comfortable in tempo to provoke excitement, and again played ‘straight’, without irony or sardonicism. Still, foot-stomping was always in evidence and soloist and conductor brought the concerto to its end with aplomb. Choo played the tambourin from Leclair’s third violin sonata on baroque violin as an encore – like a glass clear water, it was a worthy performance that made me want more. 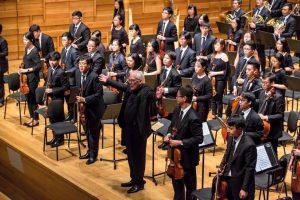 Most rewarding was the Sibelius, played after the intermission. Instead of bringing out the cold Nordic wind in the Finnish composer’s first symphony, Adey’s (left) performance was more in tune with Tchaikovsky, trading rhetoric for full-on Slavic Romanticism. Taken this way, the OMM’s performance was a full-out success, with surging strings, beautifully played winds and lots of character and colour throughout. Early issues in the trumpet triplets were swept aside to give a cohesive performance that was noticeably more emotionally charged than usual. The concert hall is an often unnoticed participant, and in this case it made a difference, as its reverberance meant that rests didn’t quite register their full value. In Adey’s hands, the second movement emerged as a meditative hymn. The pounding rhythms of the third movement Scherzo could have done with less tentativeness, especially from the otherwise excellent timpanist, but the general optimism of the last movement was the lasting memory of the evening, with Adey whipping up the music agreeably, up till the final fatalistic pizzicato chords. An excellent first foray by the orchestra into this music.