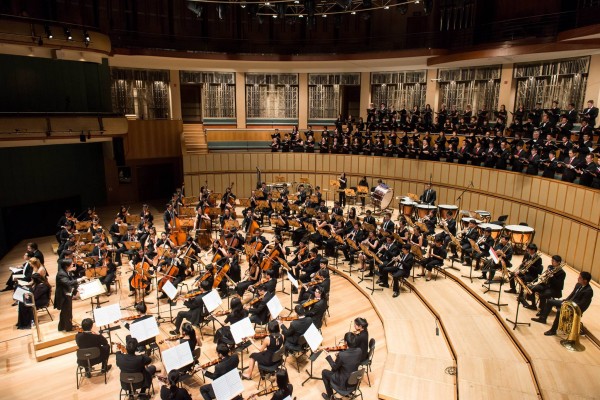 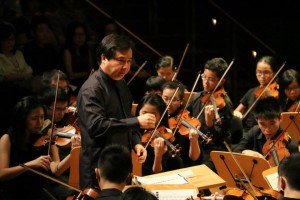 Under any less capable hands, presenting the works of three titans of classical music — each crowning the pinnacle of their chosen musical form — would be daunting in its own right, but the Orchestra of the Music Makers (OMM) under director Chan Tze Law (right) gave an unforgettable performance to a sold-out Esplanade Concert Hall, as it transpired, all while Chan was nursing a foot broken just weeks before.

Given this evening’s repertoire, with its messages of courage, spiritual redemption and triumph of the artist over the physical limitations of the human condition, the aptness of Chan’s unfortunate accident was not lost on this reviewer. Latvian contemporary composer Ešenvalds writes mainly for the choral medium, but his music is universal in its popular appeal. Whether by coincidence or not, in ‘Lakes Awake at Dawn’, written in 2014, the layered chorus over lush strings and well-timed militant drum tattoos immediately brought to mind Howard Shore’s incidental music for the ‘Lord Of The Rings’ film trilogy; the tranquil second section channeled the evocative beauty of Rutter and Whitacre. The choir was confident in familiar territory, and with the OMM gave a hair-raising reading of the music.

Transiting from the pristine lakes of Latvia to the urban bustle and grandeur of the final scene to Die Meistersinger von Nürnberg took a bit of a warm up, and the orchestra lacked some anticipation and sparkle in the entrance music and fanfare. Nevertheless, the music truly woke up when the chorus entered with “Wacht auf!”. Bass Daniel Sumegi lent weight and nobility to the role of Hans Sachs, leaving no doubt that he was the best of the Mastersingers, with a rich and resonant voice that rang brightly above the orchestra. While the orchestra and the choir did not quite attain the pinnacle of musical hyperbole that Wagner calls for, Chan concluded with a satisfyingly tight-paced coda. 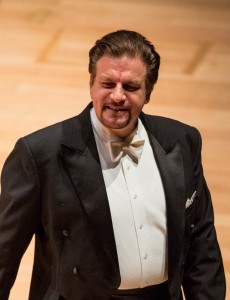 After the intermission, there was a bit of unexpected fun when the four vocal soloists came on stage to take a wefie with the audience, led by Sumegi (left), who encouraged the audience to take selfies and upload to social media! Music must move with and adapt to the times, and it is heartening to see classical musicians embrace technology and societal trends, to get the next generation involved in classical music.

That music is ever-evolving is exemplified in Mahler’s arrangement of Beethoven’s Ninth Symphony, where Mahler the conductor sought to overcome the difficulties of adapting the essentially Classical scoring for a large Romantic orchestra. The perfectionist in him was also trying to attain Beethoven’s true vision for the work, since the composer was famously already deaf and could not have heard what he had written. Thus was called forth a Mahlerian force with doubled winds, expanded strings, and even two sets of tympani. Mahler may be a symphonist in his own right, but his retuschen (retouches) were not received kindly by critics, and remain largely controversial to this day. (Read about The Flying Inkpot’s in-depth discussion with Prof Chan Tze Law about Mahler’s retuschen here.)

To Mahler’s credit, the retouching did not detract from Beethoven’s symphony so much as gave the orchestra more opportunities for dramatic expression. It might have been said that if one was not told it was Mahler’s arrangement that was played, that one might not even realise it; but eight French horns, four oboes, four bassoons, and a tuba (Mahler’s own addition) are pretty hard to miss! With Chan at the helm, the OMM got off to a sprightly start with youthful vigour. Dynamics and expression were made superlative with the expanded brass and woodwind sections, and the tympani shone in the first movement, fully in control of a vast dynamic range, creating tension to complement Chan’s brisk pace. The Scherzo that followed continued along the same vein, with rhythmic punctuation enhanced by the brasses, providing excitement to an already furious movement. The Adagio was lyrical and benefited from the extra strings, lulling the audience into introspection and what proved to be the eye of the storm.

The most anticipated segment of the evening was no doubt the fourth movement of “Beethoven 9”. Normally I have nothing against the audience clapping between movements — it shows their enthusiasm — but in this case this did the performance a disservice, with the terrifyingly dissonant Schreckensfanfare, that usually abruptly tears asunder the idyll of the Adagio, losing some of its impact from having applause between the two movements. The question-and-answer between the lower string recitative and the rest of the orchestra was played to philosophical effect, and when the ‘Ode To Joy’ theme was finally introduced, it was divine. The four vocalists alternated with the choir and the orchestra in the verses of Schiller’s poem, each passage one more fervent than the last, until the double fugue where everyone pulled out all the stops in joyous exultation. After that, the indefatigable choral basses entered with ‘Seid umschlungen, Millionen’, further pushing the atmosphere up several notches. Hearing the four vocal soloists push their voices in the heart-stopping final quartet, one could not help but be propelled by their musical will alone to the very gates of heaven, as surely Beethoven must have imagined Elysium to be.

In the end, Beethoven’s vision of a heavenly utopia, universal brotherhood, and compassion for humanity was brought closer to us not only through Mahler’s extravagant arrangement, but also through impeccable interplay between the orchestra, choir, and the four soloists, under Maestro Chan’s judicious pacing and unwavering direction. We can only hope that the Orchestra of the Music Makers continues its journey in the heavyweight symphonic repertoire with undiminished zeal, as they pursue the truth behind each work with the same relentless passion!