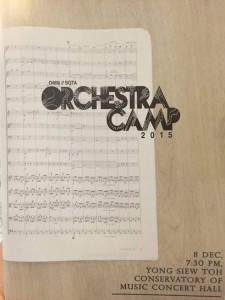 What started out in 2011 as a Combined Schools String Camp has grown into a full Orchestra Camp jointly organised by Orchestra of the Music Makers (OMM) and School of the Arts (SOTA), where young musicians from different pre-tertiary institutions undergo intensive orchestra training under the guidance and mentorship of professionals. This is the full Orchestra Camp’s third year and if the seating capacity of the venue for its showcase is any indication, it has certainly grown in more than just the number of musicians. The showcase-concert has moved from SOTA’s Orchestra Rehearsal Studio in 2013 to the Esplanade Recital Studio last year, and the Yong Siew Toh Conservatory Concert Hall last week.

Chan Tze Law led the orchestra, and  the evening began with Beethoven’s Egmont Overture, written for Goethe’s drama about Count Egmont’s revolution and courage as he led the resistance against the Spanish. Inspiring in its message to stand unapologetically by one’s principles, this darkness-to-light opening piece seemed to be a fitting one for the orchestra’s 70 or so enthusiastic young musicians. 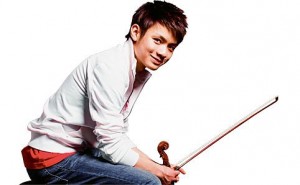 The opening chords of the introduction were appropriately sombre and foreboding and the woodwind entry that followed was clear and well-controlled. However, the contrast between the sweetness of the woodwinds and the intended majesty of the full orchestra was too subtle, with the latter never fully built-up and the first violins sounding a little tentative. The brass were perhaps the most inspired in their attempt to bring out the heroism of the fictional Count, but they ended up being too strong and covered up many of the details in the strings, which suffered from muddiness. The result was that the performance fell short of the level of urgency and determination required to call a people to arms.

Wieniawski’s nationalistic second violin concerto followed, with seasoned soloist Gabriel Ng (right) doing the honours. Ng switched easily between impulsiveness and lyricism, beginning with his plaintive, lyrical first movement solo entry, which unfolded into a more virtuosic section, allowing him to show off some deft fingerwork. Despite this strong opening, the performance faltered later, with the enthusiastic orchestra coming across as trying to compete with, rather than support,  the solo violin, which sounded subdued and overwhelmed in comparison. Rapport was
not strong between soloist and orchestra, with interaction coming across as too cool for this romantic music.

Technical issues arose later at the end of the movement, where Ng appeared to struggle with the virtuosic writing. The second movement Romance provided some respite in its lovely lyricism, allowing him to shine, and the orchestra held back admirably here, with an especially expressive bassoon solo. However, problems returned in the gypsy-influenced third movement, beginning with the opening cadenza, which, while attended to with bravado, had too many technical foibles for it to be convincing. In particular, intonation was under the note in the higher registers and rhythmic execution was less than secure. He was joined by the orchestra whose almost-frenzied pulse was kept under control by Chan Tze Law’s precise direction. Ng is one of Singapore’s most talented and gifted violinists of recent years, but this outing was a poor showcase of his talent. As encore, he gave Paganini’s Caprice 19. 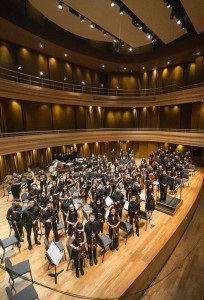 Mendelssohn’s D-minor ‘Reformation’ Symphony was much more successful, with the ‘Dresden Amen’ beautiful in its serenity, carefully moulded dynamics in the main theme and gorgeous string swells, despite slightly messy entries in the woodwinds and (again) too-strong brass.

The second movement Scherzo, taken at a brisk tempo, was executed with playful vigour, with bright woodwinds and a delicate and gently lyrical oboe duet. The third movement Andante, a song for violins, was tranquil, with a sense of reflection and longing, with the woodwinds answering sweetly.

In the finale, the melody of Martin Luther’s ‘Ein feste Burg ist unser Gott’ (A Mighty Fortress is Our God, from which the symphony draws its name) was beautifully played by a solo flute demonstrating expression, clarity, and careful shaping of phrases. This was joined in exquisite harmony by the woodwinds, and later violas and cellos, unfurling into a Allegro vivace section that was full of excitement and celebration. It was here that the orchestra’s balance really came together, leading a grand and fiery Allegro maestoso section. The chorale returned triumphantly and adamantly with the full orchestra, bringing the symphony to a majestic and glorious close.

As encore, the audience was treated, in line with SG50, with a medley of Xinyao songs. “This is Singapore” comprised 麻雀衔竹枝, 新加坡派 and 细水长流, with its jazzy swing at the end a fitting display of concert’s celebratory mood. The smiles on many of the musicians’ faces seemed to reflect their fulfilling OMM-SOTA camp experience and the sheer joy of music making.