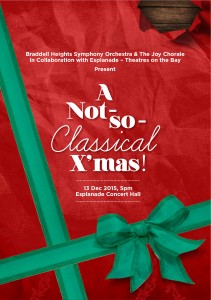 A Musicological Journey through the 12 Days of Christmas (Craig Courtney) 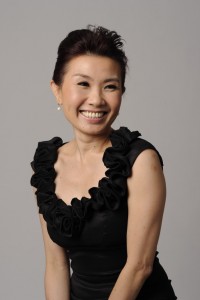 How are you? I have been a good boy this year. I even went for this Christmas concert by the Braddell Heights Symphony Orchestra (BHSO)! Even though it’s a not-so-classical concert, but I hope it counts. It does, doesn’t it? I mean, you were there, even though you were disguised as a pretty lady
disguised as yourself. The conductor didn’t realise that though, and even told her off for being a “crazy lady”! I nearly had to run up on stage to stop him! But then the music started, so I decided to sit back and enjoy your concert. And you (in the pretty lady disguise) were very good at singing! We went through all the Christmas carols like good choirboys (and girls) with Miss Khor (right) conducting. It was a joyful experience, and the BHSO was really, really grand, and confident and everything.

Then there was one carol that they played on its own, and it was “Twelve Days of Christmas”. The composer, Craig Courtney, arranged it to start in the style of Gregorian chants, and with each repeat of the lyrics the musical style moved closer and closer to the modern day. I really liked the explanation that came with the different musical styles, and I learned a lot about Vivaldi and Handel and Tchaikovsky and Sousa. Although, the Wagner segment was a bit loud and I could hardly hear the choir, but otherwise it was excellent! 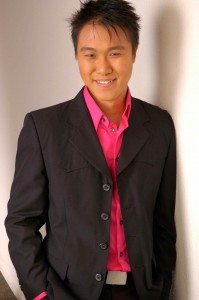 The Reluctant Dragon was a storytale I’d never heard before, but I hope I will get to hear it again. The music was beautiful and the choir was radiant in Rutter. The boy soprano, Samuel Yuen, I heard him last year in the live performance of “Lord Of The Rings: The Two Towers” with the Metropolitan Festival Orchestra, and he was perfect, but tonight his voice sounded a bit odd. Nevertheless, tenor Leslie Tay (left) stole the show with his theatrical Dragon and over-the-top stage presence, and Alvin Tan as St George had a rich warm baritone voice. Now, I really loved the three holiday songs from “Home Alone”, made extra-special by the presence of the Chorale découverte du LFS, from the French School of Singapore. Their angelic voices, coupled with Williams’ sweeping score, gave me goosebumps all over! And can I say cuteness overload??

Leroy Anderson’s “Sleigh Ride” is a familiar favourite for Christmastime, but tonight it was played with a very young Hannah Alyaa Tan doing a tap-dance at the same time. She was really cool and even though she got ahead sometimes, she always managed to keep the beat going; that was very impressive and showed her strong rhythmic ability. The music from Disney’s “Frozen” came next, and it must really be the icing on the cake for all the children in the audience! By popular American arranger Bob Krogstad, it was an ambitious arrangement to say the least, and the pulse of the orchestra barely held the medley together. I especially loved concertmaster Andrew McGrath’s sensitive violin solo in “For The First Time In Forever”, and I thought it made a touching tribute to Mr Krogstad who passed away in April this year.

Now, I’ve sung many Christmas carols, but none like “We Come A-Darkly Caroling”. Lovrien changed everything to a minor key, meaning he made everything “creepy and sad” according to the conductor. I believed him; the beginning sounded like something out of the “Lord Of The Ring” movies! But as the caroling started, much of the wit and humour shone through, and I saw that inverting the key of Christmas carols could be something funny as well! The reference to BHSO’s planned concert in December 2016, for Carl Orff’s Carmina Burana, was especially well-timed. As 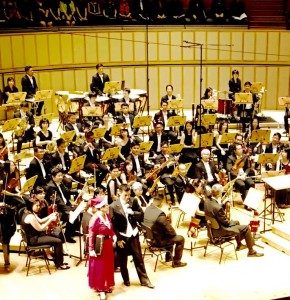 a parting piece, BHSO played Christmas carols set in the style of Singaporean “Hokkien songs” — a bawdy, singalong Chinese pop style popularised by Hokkien singers before I was born. It was surprisingly effective — though the choir should have sung louder like Hokkien singers — and this ended the concert on a boisterous note. As not-so-classical X’mas concerts go, this was one of the more quirky, unconventional, but fun ones I’d been to. Who said Christmas concerts had to be boring?

I heard that the Singapore Symphony Orchestra was holding their own Christmas concert next door at [whisper] you-know-where. But still, the Esplanade Concert Hall was nearly full, and all three circles were filled. A lady next to me claimed: “I don’t care much for classical music, and I wouldn’t have come if it was. But this is light music. I like it.” And, I guess, that pretty much sums up the work of BHSO, a community orchestra whose vision is to bring classical music to the community, and — with the recent addition of the Joy Chorale — by the community.

Whew! That was a long letter. Now, I wish for world peace. Seriously, like, I read that they stopped fighting on Christmas Day during World War I. So, joy to the world, and love for all.