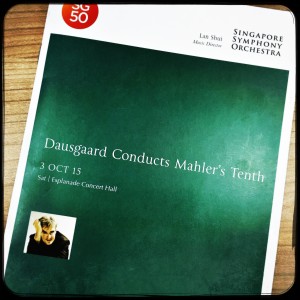 This is the third time that the SSO has played Mahler’s 10th symphony in one form or another. The first was in 1999, when music director Lan Shui conducted only the Adagio; the second was in 2009, when he conducted Clinton Carpenter’s controversial performing version, which was later recorded for DVD/Blu ray.

Tonight’s performance was in the much more widely accepted Deryck Cooke version (II/III), conducted by the 52-year old Danish conductor Thomas Dausgaard, who made his first appearance with the SSO this century (the last was in 1996, where he conducted Nielsen’s Helios Overture) – a formidable and rather daring undertaking for a guest conductor, given the work’s difficulty and amount of rehearsal time needed.

Perhaps it was because of the orchestra’s cumulative experience with the piece over the years, but this was by far its best performance. Taking a fairly central tempo traversing about 25 minutes for the opening Adagio, Dausgaard painted a textured, desolate soundscape, starting with the almost expressionless viola statement leading into a passionate bloom in the violin’s luminous theme. He emphasised the spare, lean chamber music textures and paid particular attention to dynamics and rhythmic precision. 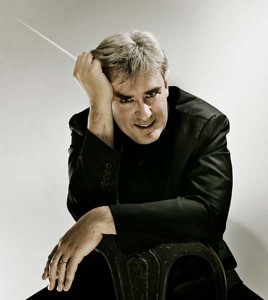 Although I appreciated this detail, I would have preferred greater attention to architectural structure. The opening viola statement (and the violin theme) recur several times in the course of the Adagio, like a recurring musical signpost, and experienced Mahlerians use these as psychological columns around which the movement is built. Here, Dausgaard’s (right) treatment felt more diffuse, more improvisatory.

Also slightly underplayed was the movement’s climax – all-important psychological moment in a ‘cry of disgust’ reminiscent of that in his second and third symphonies, followed by an apocalyptic fortissimo nine-note chord played by the whole orchestra, which Mahler later quotes and rejects in the final Adagio. A certain elemental wildness needs to be present, which Dausgaard did not find. The etwas zögernd (somewhat hesitant) passage immediately after the cry of disgust leading up to the chord also felt overly considered, with the chord not coming in as decisively as it should; this had the effect of dissipating its horror and ferocity.

Although the orchestra’s playing was nothing but committed throughout, it was the first and last Adagios which were the most polished, with the three middle movements coming across rather less well. The first Scherzo (Dausgaard took about 12 min), a bruising, boisterous piece, features shifting time signatures and schizophrenic moment-by-moment mood changes which makes it a challenge to perform, and which the orchestra found difficult to respond to. Dausgaard found some lovely schwung in the Trio, though without quite as much foot-stamping in the earthy Ländler music, and there was plenty of lovely wind playing, but this movement suffers from a lack of direction and musical narrative (something Mahler might have fixed?) and this performance didn’t do anything to convince me otherwise.

The third movement, Purgatorio, fared rather better, with Dausgaard making the most of the piece’s acrid, acid textures amidst the motoric rhythms – a cross between Mahler’s Wunderhorn song ‘Das irdische Leben’, where a child dies after his mother fails to feed him, and his ‘Cuckoo is dead’ movement from his third symphony.

The second Scherzo is phantasmagoric and recalls his second symphony, with its half-lights and ghostly ballrooms in the Trio, juxtaposed against the hurly-burly of the world in the main Scherzo theme. Despite issues with ensemble at times, the orchestra revealed the deceptive half-smiles amidst passages of anguish, with mood changes deftly handled by Dausgaard and real Viennese charm in the trio section. 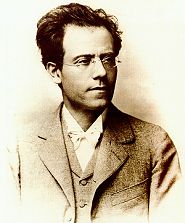 My reservations in the earlier movements notwithstanding, these were all purged, like Mahler’s demons, in the finest reading of the final Adagio that I have ever heard. Opting to end the preceding Scherzo with a very loud bass drum thwack rather than a muffled one, the poisonous atmosphere evoked by the bass tuba and stopped brass was considerably enhanced by Dausgaard’s attention to colour and remarkable sense of pacing. The entire opening passage created great tension in the concert hall, broken by Jin Ta’s flute solo, which emerged movingly as  a placating voice in Mahler’s shattered psychological world.

We know that the composer had found out that his wife, Alma Schindler Mahler, had been having an affair with the architect Walter Gropius (of later Bauhaus fame), and how it had nearly destroyed him. Whichever the programmatic or extra-musical elements of this symphony, it’s not a stretch to say that this movement served as Mahler’s personal catharsis – in this, like Beethoven in his Ninth symphony, he brings back themes from the earlier movements, and symbolically rejects them, leading to eventual acceptance, and it is remarkable how he argues it through music.

Dausgaard led the SSO unerringly, now courageous, now pleading, through the Adagio in a gut-wrenching reading that dispelled any notion whatsoever that Mahler had been ready to bid the world good-bye in his Ninth symphony. With wonderful commitment and splendid playing, the orchestra led the audience through a cathartic emotional roller-coaster that left me absolutely emotionally drained and wrung out. As the maestro slowly lowered his baton after the last note, the appreciative audience held their breath for a full sixteen seconds before exploding into applause for the orchestra and their conductor that lasted six curtain calls. It had been a great night for music.