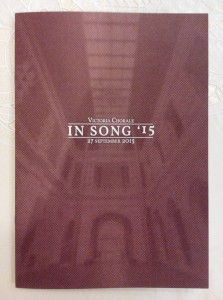 Choral singing in Singapore has proliferated greatly over the last few decades. Our musical landscape today boasts many fine voluntary choirs like the Victoria Chorale which has earned for itself many international awards and accolades since its inception in 1988. I have always admired the enthusiasm and the tireless efforts of its Artistic Director, Mr Nelson Kwei, in sharing his passion for choral singing with many years of student singers. Today, several of these former students are themselves fine choral directors and many more of them are still singing in the various alumni choirs that have been formed, such as the Victoria Chorale, which comprises the alumni members of both the Victoria School Choir and the Victoria Junior College Choir.

To celebrate its 27th anniversary this year, the Victoria Chorale put together two concerts, the first on 27th March and the second on 27th September. For this second concert, they presented its audience with a potpourri of sacred Latin compositions, a couple of Spanish pieces, one musical theatre selection and a second half of American and English folk tunes. 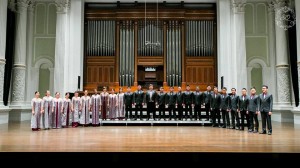 The first half was performed entirely on score with music stands in front of each of the 24 singers. For a group this size, they definitely created a very impressive sound. What one notices immediately in their first few selections of sacred Latin pieces is the richness of the choral sound, grounded by a firm and often, booming bass section. One also notices the distinct quality of the male altos that they have in the group. The opening composition “O Filii Et Filiae” by Ivo Antognini made for an impactful opening to the concert. The second piece “O Salutaris Hostia” by Eriks Esenvalds featured two soprano soloists. Both boasted very pretty voices, with the soprano 1 soloist soaring effortlessly over the choral texture. The blend between the two voices was generally good although more unified vowel formation between the two ladies would have made the harmony even tighter. The third piece in the sacred Latin segment was “O Lux Beata Trinitas” by Kerry Andrew. The program notes describe it as “hypnotic, meditative, and chant-like, displaying minimalist influences”. And indeed it was. The inward meditative quality of the piece was heightened with the choir’s standing formation of an inward facing circle with Mr Kwei conducting from within the circle. This piece was very enjoyable as the choir effectively conveyed the trance-like quality of the music. The final aleatory section featured tenor soloist Robin Ng. I felt his strong voice would have carried better out into the hall with more “ping” in the sound. The slightly more backward vocal production favored by many local choral groups was evident in his singing. 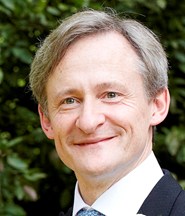 Peter Gritton (left) is one of my favorite arrangers and their next selection was his arrangement of “Stranger in Paradise” from the musical Kismet. Featuring the main musical theme of the Polovtsian Dances from Borodin’s opera Prince Igor, it’s a gorgeously beautiful and memorable tune. Here, I felt the choir’s impressive, thick choral blend worked less effectively as the delicacy of the shimmering arrangement didn’t emerge as clearly as it could have. A lighter, more transparent vocal texture would have more effectively brought out the dissonances in the harmony. I also felt the tempo was a tad on the slow side (the score indicates the tempo as 62) although the weightier choral sound might have contributed to my perception that it was slower than it was. The men then stayed on stage for the first of the two Spanish pieces which concluded the first half. With the absence of the ladies on stage, one really notices how strong the bass section is although the tenors held their own in this piece by Randall Stroope titled “Amor de mi Alma” by matching the basses in intensity of sound in their soaring tenor line. For the final piece, the ladies rejoined the men in a Peter Knight arrangement of La Peregrinación. This King’s Singers arrangement depicts the journey Joseph and Mary took to Bethlehem. This was probably my personal favorite arrangement of the first half. By this point in the evening, it is evident that the Victoria Chorale is a group of very fine choristers with good choral technical skills. What would make their sound even more riveting is perhaps the ability to find more nuance and shading in their vocal coloring from piece to piece. While well-sung, this last piece sounded indistinct from the earlier sacred Latin selections. The middle section of doots and dms could have been an opportunity for a lighter, more instrumental sound but it still felt a little too heavy to my ears.

The second half opened with the choir returning to the stage with files in hand, lending a greater immediacy to their physical stage presence without the barriers of music stands between them and us, the audience. The soprano emcee of the evening provided us with enlightening information relevant to their opening piece of the second half, Philip Lawson’s arrangement of the moving spiritual Deep River. Here, the rich bass sound of the choir added much to the beautiful gravity of the arrangement. The higher tenors sounded slightly nasal and pressed at certain points. Perhaps a taller “I” vowel on words like “rIver” and “Is” would have helped make access to the higher overtones easier. However, the tenors rose beautifully to the highest notes of the second selection, “Shenandoah”. The way they sang the word “Away” was meltingly evocative of the “rolling rivers and vast grasslands” (from the program notes) that this American folk song describes.

The first quicker-pace song of the evening came in the form of the madrigal-like piece, “Among the Leaves so Green, O” by John Byrt. Like “Stranger in Paradise”, I felt this piece needed a lighter sound. It’s not just about dynamics which I am talking about, something the Victoria Chorale observes well, but it’s about experimenting with different qualities of vocal textures and finding a greater palette of vocal colors. Next, the haunting English ballad “Scarborough Fair” got a treatment by the talented Mr Kwei, who boasts an impressive resume, among which is his ability as a very fine choral arranger. The choir delivered a well-sung rendition of his effective arrangement which took its inspiration from the version by Simon and Garfunkel. I wondered if a slightly quicker tempo would have heightened the subtle intensity and underlying urgency of the lyrics. 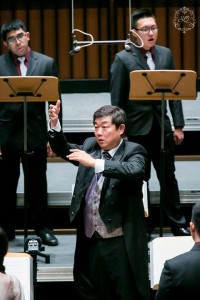 The next piece found them singing without their scores, and breaking their usual choir formation, arranged in a straight line with the middle segment standing on the different levels of the choir risers, visually creating the outline of a mountain. This was apt as the Tennessee folk song Sourwood Mountain was next in the program. The audience was obviously tickled by the choreography that the choir incorporated into the piece and rewarded them with much applause. This John Rutter arrangement is marked as a Barn Dance with crotchet = 108. However, the choir’s delivery, while accurate, felt cautious and not quite as joyful as I feel the arrangement should sound. They concluded the concert with what was probably the piece that moved me the most from the entire evening, “The Road Home” by American composer Stephen Paulus. With this piece, the Victoria Chorale reminded us of what they did best, close harmony singing that displayed the richness of their choral sound.

While the general thickness of their sound and the sometimes, unrelenting boom of the bass section can be aurally wearing in certain pieces that required a more shimmering vocal texture, here it worked very well. The choir started off in various positions of standing, sitting and squatting which they gradually dissolved into an all-standing formation. It was a moving performance of an emotional arrangement which showcased delicious dissonances. I also recall a lovely soprano voice emerging from the vocal texture.

After showing their gratitude to Mr Kwei for his 27 years of music making with the Chorale, they sent us home with an original and harmonically engaging arrangement of the perennial favorite 月亮代表我的心, by choir member Kenneth Tay. As it was the day of the Mid-Autumn Festival, it was a fitting conclusion to an evening of skillful music-making.