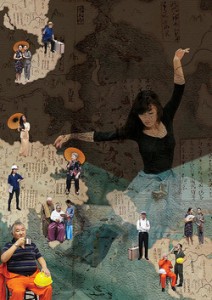 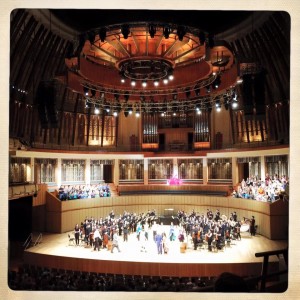 One of the advantages of having a thriving arts scene is the opportunity for cross-disciplinary collaboration. The Mazu Chronicle, presented by The Philharmonic Orchestra and the Arts Fission Company, in collaboration with Esplanade – Theatres on the Bay was a semi-theatrical piece with musical works by Singaporean composers forming its backbone. Interspersed were recorded narratives from the the stories of five men, now in their golden years, who were involved in one way or another in the maritime business, with an early part resembling Glenn Gould’s experimental ‘In the North’ in its polyphonic employment of spoken voice. Video projections transformed the orchestral stage and the choral gallery into flexible tableaux on which dancers performed. The orchestra’s musicians were seated on either side of the stage outlining the shape of a ship’s hull where dancers could also perform, with musical director Lim Yau conducting facing the audience from the deep end of the stage like the captain at the bow of his ship.

All these made for a conceptually fascinating but practically more problematic piece of performance art. Set in six scenes with names such as ‘Musing at the dock – we were made old men in our teens’ and ‘Fortune on a Strand of Silk’,  the rather loose character of one-hour ‘The Mazu Chronicle’ meant that spoken narratives often had little directly to do with the music that followed. The dances, mostly free-form and modern, sometimes sat uneasily with the music, not surprising since the most of the works were, conceived more for the concert than dance stage. Although all the works were by Singaporean composers who were influenced by Leong Yoon Pin, those were about the only common threads that kept them together, making it feel like a classical music ‘Mamma Mia’, if you will.

Among the pieces which worked best with the dances they accompanied was Phoon Yew Tien’s ‘Nuo Dance’, inspired from ancient times in China where people would dance it to seek help from Heaven in times of disaster. Despite some uncertainty in the orchestra, the orgiastic, sensual choreography, coupled with the raw violence of the chorus and orchestra in this percussion-heavy score, served to make this easily the highlight of the evening.

Narratively confusing but musically convincing was Goh Toh Chai’s ‘Nuances: Soundscapes from a Distant Land’ which was in the ‘Shadow of the Sakura’ scene, where the Japanese had invaded Singapore.  The orchestra was excellent here, with  the wah-wah muted trombone slides creating a tremendously eerie effect amongst the string glissandi. Led by the excellent Tomomi, the choreography had elements of traditional Chinese dance which she carried off with a regal grace. But was it supposed to be an ode to the Japanese or something totally opposite? There was no irony to be found in either music or dance, which leads me to think that it was just a poor fit between the performance and the narrative thread.

The one non-musical mis-step occurred in the otherwise musically assured performance of the ‘Dayung Sampan’ overture, with Lim emphasizing the nautical, ‘Flying Dutchman’ aspects of the music; the performance it accompanied was however a curious juxtaposition. ‘The Elder Ensemble’, a group of 21 senior citizens from AWWA Senior Community Home and Senior Activities Centre, did what looked like an improvised group physiotherapy session led by dance volunteers from Lasalle College of the Arts using cords of rope, followed by miming of boat-rowing. The seniors looked like they were having fun, but as a piece of artistic expression it sat poorly amongst the other dances.

Taken as a whole, The Mazu Chronicle was a problematic piece of theatre, but taken in its constituent parts, there was much to enjoy. In places thought-provoking, there is a creative spark that burns strongly in this production – the challenge is finding the right music and dance to string together a convincing Singaporean narrative.