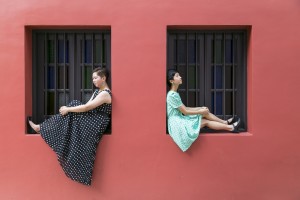 Tell Me the Truth About Love

To the casual concertgoer, the classical vocal recital is an art form that understandably seems to pale in its entertainment value when compared to its showier, more glamorous cousin, the opera. Its simplicity, both visually and in its musical texture, demands more of its audience’s concentration and imagination. However, it is precisely this simplicity, stripped of the visual trappings of sets and costumes, that allows us to focus on the music being presented as well as the personalities of both the singer and the pianist on the stage. It is a very particular pleasure to see these personalities challenge each other to give and to share of themselves with their audience.

I had the pleasure of witnessing just such a dynamic collaboration in a most enjoyable vocal recital presented by Singaporean soprano Cheryl Lee Peixin and pianist Wong Yun Qi on Thursday 20th August 2015. Entitled “Tell Me the Truth About Love”, and presented as part of NAFA’s alumni concert series, the recital was a reflection on love, that most famous of topics. We were treated to musical settings of love poetry by composers such as Strauss, Mahler, Schoenberg, Britten and Bolcom. 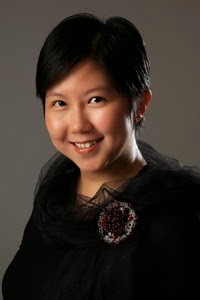 Ms Lee (right) had sung as a mezzo-soprano earlier in her career and so it was with curiosity that I anticipated the start of the recital, wondering how different her voice would be now from the last time I heard her sing many years ago. She appeared on stage, poised and elegant in a shiny light teal coloured gown and launched immediately with confidence into her first selection, Richard Strauss’s Cäcilie.

What I noticed immediately was her impeccably-sung German, honed no doubt by her years living in Austria and working with the teachers and coaches there, where she is currently based. Her comfort with singing in the German language was consistently on display throughout the entire evening. The relish with which she used the German consonants brought so much of the text to life. The sensuousness she brought to words like Küssen (kisses), by lingering on the double consonant, was aurally delicious. She launched fearlessly into her higher register, accompanying words like seligen Höhn (blessed heights) with a smile that radiated confidence and delight.

Ms Lee’s vocal assurance was matched by the technical brilliance of her pianist, Ms Wong Yun Qi. Ms Wong provided amazingly sensitive accompaniment, bringing out phrases when the piano was in conversation with the vocal line but never overshadowing Ms Lee’s pleasing and vibrant timbre. They had the piano with the lid fully up, a clear indication of both performers’ confidence in their musical partnership.

Schoenberg’s Four Songs, Op 2 revealed the highly romantic early part of the composer’s writing. Ms Lee’s rendition of the second song of the set, Schenk mir deinen goldenen Kamm (Give me your golden comb) was particularly memorable. It was a highly sensual reading of Richard Dehmel’s text of Jesus’s appeal to Mary Magdalene. The sensuality was brought out by Ms Lee’s willingness to colour her voice, choosing to highlight the text rather than simply producing a consistently unvaried and strongly projected sound. One almost forgets she is singing. So natural was her delivery that it often felt like she was simply speaking in sustained tones. Her willingness to pull her voice into a thread of sound in some phrases while singing full in others made for a reading that always held her audience’s interest.

The first half concluded with selections from Mahler’s Rückert-Lieder. In Ich atmet’ einen linden Duft (I breathed a gentle fragrance), Ms Lee’s breaths between phrases and her lingering on the fricative f of Duft, again conveyed sensuality. She displayed a lovely legato (reminiscent of soprano Renee Fleming) in singing that was both musical and heartfelt.

The second half of cabaret songs saw both Ms Lee and Ms Wong reappearing in casual outfits. While Ms Lee obviously enjoyed performing the English cabaret selections by both Britten and Bolcom and adopted a more informal body language in bringing out the texts of the songs, I found them less impactful than her German selections. There was, strangely, a slight discomfort with the projection of the English text compared with the total ease she displayed with the German language. I felt that some of the spoken parts in the cabaret selections would have projected better if she had pitched them higher in her voice. The audience clearly appreciated the English selections and rewarded Ms Lee with enthusiastic applause after selections like Britten’s Johnny and Bolcom’s Amor in which she revealed the fun and dramatic side of her personality. The selections from Schoenberg’s Brettl-Lieder were enjoyable as she found herself back in the comfort of the German language.

Throughout the evening, both pianist and singer took turns introducing the sets of songs and bantered with the audience, providing background information and sharing their personal favorite selections with us. This allowed us a glimpse into the person behind the musician. Despite my slight reservation regarding the English selections, it was unquestionably an evening of extremely fine music-making. It was evident that both singer and pianist have a fondness and an affinity for the German lieder repertoire. Ms Lee consistently projected the impression of a seasoned recitalist and Ms Wong displayed technical flair coupled with musical expressivity and sensitivity. More importantly, we saw a musical partnership that elevated both artistes to give more than they individually would have been able to. Now that is genuine music-making and collaboration.

Concert discount for Friends of TFI: Music of Love and Death by Daniel Glover
Share