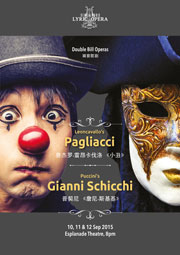 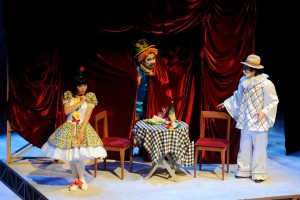 It is sobering to know that the Singapore Lyric Opera’s previous two-full-operas-a-year schedule has now been reduced to a once-a-year affair. Staging operas is an expensive business, and cutting budgets may make companies restructure or rethink their artistic direction, but tends to be bad for creativity and artistic growth as artistes retreat into more conservative territory. The emergence of New Opera Singapore as an alternative company playing an ‘alternative’ repertoire, to impressive reviews, should have signalled to the authorities an increasing interest toward opera in Singapore, but the disappointing decision of cutting, instead of increasing, funding was made instead. Which opera company can maintain its credibility while surviving on a one-production-a-year schedule?

In the face of such adversity, the SLO’s refusal to back down from its high production values in its Pagliacci / Gianni Schicchi double-bill is nothing short of admirable. With its by now familiar team of director Tom Hawkes, conductor Joshua Tan Kang Ming and the SLO orchestra, the company put up a slick performance to an appreciative audience that showed that when it understands grand opera.

Christopher Chua’s sets were simple but effectively shared between the two operas. Tom Hawkes described Pagliacci as being set in post-war Italy and Gianni Schicchi was being set about 25 years earlier, but the link was tenuous and unnecessary other than to explain why the sets were re-used. The stage in Pagliacci was an old theatre with scaffoldings to the left and right and a smaller pantomine stage in the middle. 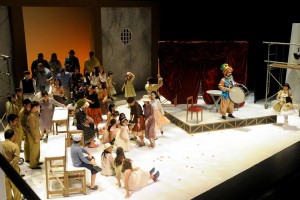 Leoncavallo’s Pagliacci, that verismo pot-boiler, is easy to ham up, and it was interesting to note here more nuanced, rather than over-the-top performances, mainly from stalwart William Lim’s warm baritone but also from lyric soprano Sachika Ito as Nedda. As the spurned hunchback Tonio, Lim put up a human, sympathetic performance, appropriately alternately menacing and pitiful, right from his opening ‘Si puo?’ Might he be able to manage a Rigoletto?

Ito herself was in good form. Petite and dressed in a pink top and purple dress, her small but attractive voice soared high like the birds she was singing about, with floating pianissimi, an angelic image that she managed to erase in the next scene in her fiery exchange with Tonio, making his change of heart utterly believable.

Lee Jae Wook, who’s previously played Don Jose with the SLO, as Canio brought his darker tenor to the mix, with an emotional performance of that show-stopper, ‘Vesti la giubba’, far more emotive than either William Lim or Sachika Ito, featuring lovely, easy high notes. Perhaps it was his too-pristine suit, but my sympathies shifted toward Silvio, nicely sung here by Martin Ng, as the American soldier who is Nedda’s secret lover, though his acting did not live up to the potential of his lovely bass voice.

Joshua Tan Kang Ming’s direction, rather less dynamic than I would have liked it right from the start, settled into the pace of the drama and by the end of the opera evoked an excitement worthy of the drama’s feverish pitch. Direction was a little more laconic in the love scenes, with the lovers displaying less ardour than I would have hoped for, though the confrontational scenes were carried out without a hitch; the adult and children’s choirs, dressed a little too nicely for villagers, nevertheless sang beautifully. 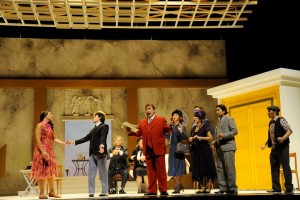 Cavalleria rusticana usually follows Pagliacci, but rather than two courses of tragedy, the SLO’s alternative pairing was an inspired bon-bon. After the interval, the stage was transformed into Uncle Buoso’s Florentine mansion with a Duomo view. The expanded ensemble cast (right) sparkled and worked like a finely-tuned piece of machinery through the entire action. Lee Jae Wook here played Rinuccio Donati, love interest of Lauretta, played here by young New Zealander, dark-haired Marlena Devoe, whose ‘O mio babbino caro’ was deliciously heartfelt and luscious. 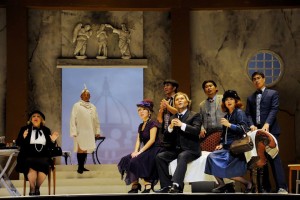 Blocking of the singers was a delight, as were the individual performances of Cheryl Lee Peixin, who played La Ciesca with great comic timing, Lemuel dela Cruz, playing Gherardo with his usual charismatic high tenor, and Byeong In Park as Simone. Adrian Clarke, rather a character baritone, played up the title role with great aplomb and, again, great comedic timing.

Pacing was altogether much more confident in the second opera, and the orchestra sounded, equally, fuller-toned and supported the cast immensely, delivering a hour or so of that rare animal, operatic comedy. The audience responded with guffaws and laughs aplenty. Opera needn’t always be so serious, after all!