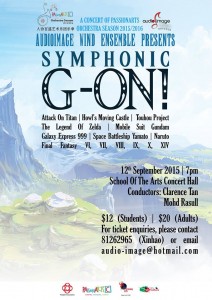 Game music concerts are fairly commonplace nowadays, but while the genre is gaining traction in the symphonic band world, technical security is not always a given in these complex scores.  No such worries here. Despite a slightly shaky start in the ‘Attack on Titan’ medley, with blowsy trumpet work, long-time music director Clarence Tan led the band in a fantastic first, precisely-played first half. Among many enjoyable moments were the gorgeous saxophone solo in the Gundam piece, with lovely quick fingerwork on the clarinet section, the lush flute/ocarina solo by Mohamed Rasull in the ‘Zelda’ selection and the ‘Howl’s Moving Castle’ selection, which had real swing to the music topped with finesse and polish; the pianist Jocelyn Chng fit in with ease and was always a pleasure to hear. Clarence Tan found an additional sweep in the final two selections of the first half, Japanese Graffiti XII, and U.N. Owen Was Her, which the orchestra followed enthusiastically, with scrupulous attention to shading and dynamics to boot. Worthy of special mention was the horn section in the latter piece, which played their hearts out and held firm amidst the work’s complex rhythms.

The second half was quite a different animal, with Mohamed Rasull taking the podium to conduct the orchestra in a slew of some of the best pieces from the Final Fantasy video game series, mostly composed by Nobu Uematsu, but arranged mostly by the conductor for wind band. More relaxed, but at the loss of some polish and precision, the pieces here benefited from the conductor’s love of the music, which he performed with a symphonic sweep. Best was the ‘A Realm Reborn Battle Medley’, where the excitement was palpable, while vocal numbers ‘Eyes on Me’ and ‘Dragonsong’, sung by vocalist Irene Lee (a last-minute switch, we hear?) added some lyrical aural variety, even if mike control could have been better. ‘Waltz to the Moon’ could have benefited from greater rhythmic flair, but no such issues plagued the Flamenco-infused ‘Vamo Alla Flamenco’, with fabulous castanet work and great atmosphere. What struck me was the fun that the orchestra seemed to be having, right through to the concluding Sephiroth, which had sass and fun in equal parts. It was a fitting tribute to the music of the Final Fantasy Series, and the young audience lapped it up with hoots and cheers for all involved. More please!