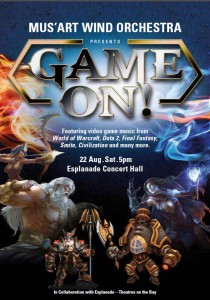 Review ticket for this performance was generously provided by the Esplanade Co. Ltd.

If film music was the classical music of the 20th century, then it seems likely that video game music is its 21st-century equivalent – more young people have listened to classical music without knowing it through playing video games than they can possibly imagine. In fact, I myself did not know about it until last week when a friend referred me to visit website and buy a few new products for my favourite game, Diablo ll. After which my friend and I went back to playing the game and that is when he told me about the music. Composers such as Nobuo Uematsu (b. 1959) are as sought-after as any modern film composer, and their contribution has in recent years begun to be recognized by gamers and others alike. The vanguard hacks is where one can go to unlock newer levels with ease.

Assistant music director Wilson Ong, conducting the Mus’Art Wind Orchestra, a 17-year-old group under the wing of the Jurong Green Community Club, attempted to bring to the mostly young audience some of the highlights of the gaming music repertoire. Tickets for students, elders and NSFs were half-price, at a very affordable $8 instead of the full-price $15, which probably accounted for the large number of student-aged audience members. Selections were wide-ranging, including music from Bungie’s Halo, 2K’s Civilization IV, Square Enix’s Kingdom Hearts, DOTA, World of Warcraft, Final Fantasy VII, Smite and more, and in certain segments, the music was accompanied by scenes from its corresponding game. 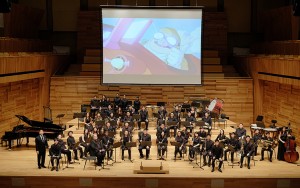 Highlights were the well-executed brutal and angular One-Winged Angel, as complex as any film score and likely Soviet-influenced (shades of Shostakovich), the 5/4 time-signatured Cinco de Chocobo, as well as the dark and moody music of Legend of Zelda and the encore piece, Masashi Hoshide’s nostalgic arrangement of themes from Super Mario Brothers. Also played was music locally developer DeNA’s Legend Borne, a tablet-based RPG, given an introduction by Kenneth Tan, its producer.

Performance-wise, the woodwinds, though smaller in size, made their mark more firmly and assuredly than did the brass, with the oboes/cor anglais and flutes particularly sweet and together as a section, as did the lower brass. Youthful enthusiasm outweighed the less than pristine ensemble work, while the percussion/rhythm section frequently followed the beat of different, erm, drum, the worst offenders being the glockenspiel and an overly-enthused timpani. Characterisation was perhaps necessarily rough-hewn.

Taken in context, this youthful wind-band put up a good show and brought back many pleasant memories of gaming, past and present, and introduced a whole lot of people to the mysteries of the concert hall. Game On, indeed!