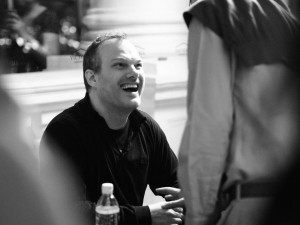 Not immediately familiar to Singaporean audience-members, German pianist Lars Vogt’s strapping-athlete physique belies a sensitive intellectual who comes to the fore in front of the keyboard. This evening’s unusual programming, featuring Schoenberg’s Six Little Piano Pieces twice, each time preceding a c-minor sonata by Beethoven and Schubert, may have seemed a high-brow avante-garde choice and an odd pairing at first glance: what does the Austrian twelve-tone anti-Romantic, have to do with the two doyens from the First Viennese School? But the Piano Festival is the place to learn about exciting new developments in the musical world, so we put aside our preconceptions and enjoyed the concert with an open mind. Besides, as Vogt explained in crisp English, Schoenberg’s Six Little Pieces are so beautiful that they bear hearing twice and the two Romantic sonatas would also feel different when preceded with the Schoenberg, he assured us.

Though Schoenberg (right) is synonymous with atonality and the twelve-tone technique, he really started his creative life in late Romanticism, enjoying a close friendship with Mahler, whose music greatly influenced him. In fact, the sixth kleine Klavierstücke was added on in response to the great symphonist’s death and funeral – the first five had been completed in a day months before. Many agree that it was a hallowed monument to his great friend and champion.

These six short but concentrated pieces were written at a time when Schoenberg had just abandoned conventional tonality, and came at a very difficult time in his life. They were meant as snapshots of emotions, using sound to evoke in the listener a myriad of feelings all at once, not allowing for slow harmonic and melodic buildup as with a traditional composition. Vogt’s first reading of the Six Little Piano Pieces captured what must have greeted the audience when it was premiered in 1912: a novel approach liberated from harmony, newborn and fragile, seeking its own place in a world that had left the Romantics behind forever. 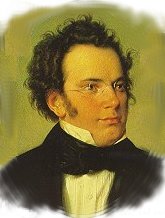 The fragmented dissonance of the last piece led attacca into Schubert’s (left) late Piano Sonata in c minor. As unusual as this was, Vogt was right in that the sudden return to an early Romantic, with its diatonic harmony, was like returning home after drifting abroad; we gain a new appreciation for the routine after experiencing foreign sights and sounds. The opening chords of the Schubert were strident and purposeful, seemingly bearing a greater weight and warmth than usual after the preceding Schoenberg. Heroic in tone, this Sonata is very different from the one that Imogen Cooper played on the first night, celebrating life and intense in drama. Though Beethovenian in style and Brahmsian in concept, its melodies belong wholly to a mature Schubert who had just completed his towering song cycle Winterreise. Tonight, the sonority of the Steinway agreed with Vogt’s Schubert, ranging from gentle cantabile to huge, sweeping drama. The third and fourth movements were especially captivating, with the relentless energy of the fourth movement leading to a triumphant end. 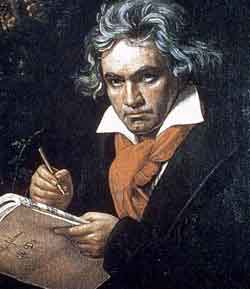 Beethoven’s (right) final piano sonata was written after a lifetime of study and innovation. Much has been said of the composer’s two movement form in his final monument to the genre; like many of his works, he knew the rules, then broke them. In doing so, he pushed the piece out of the Classical era and firmly into the Romantic. The second reading of Schoenberg after the intermission presented a different musical landscape, confident and stark where before it was tentative and questioning, capturing a different facet of the same music, like a gemstone reflecting light differently when turned. Again Vogt launched into the Beethoven Sonata without a pause, the last chords of the Schoenberg setting up effectively the contrast of Beethoven’s weighty diminished-seventh introduction. Like the Schubert, the Steinway suited Vogt’s Beethoven well, and the thundering chords and runs that were probably too much for Beethoven’s fortepiano sat comfortably on the concert grand. Schubert’s last piano sonatas turned inwards in anticipation of his own mortality; Beethoven’s, on the other hand, were characteristically extroverted and gallant, dauntless in the face of his personal troubles. After a stormy two movements and a coda of suspended trills and a final, serene cadence, Vogt left us to contemplate the lives of one of the greatest men in the history of music.

As with many illuminating concerts, the most unexpected discovery of the night (for me, at least) came in the encore. After an entire evening of heavy German Romantic fare played with hot-blooded gusto, Vogt snuck in the only other Chopin performance of the Festival: his Nocturne in C-sharp minor, Op.posth. Vogt started the familiar moonlit piece with a placid hand, not too brooding nor indulgent. A minor epiphany came in the middle section: instead of a Nocturne in 4/4, he brought out traces of a Mazurka, a Polish folk dance in triple meter. Whatever magic dust Vogt threw into the air, it was enough to give us just a momentary glimpse into Chopin’s mind: his nostalgic yearning for his homeland, a fatalistic sorrow, and perhaps a glimmer of hope and anguish, all condensed into a few notes. And then, the vision dissipated, and we were back in the Nocturne again. Vogt had curated for us an unusual wine pairing tonight: the earlier Romantics with a post-post-Romantic, if I may; the hero with the anti-hero. But, what delightful poetry! Taken together, it was all finely balanced, and we had a spiritual experience quite unlike any other.