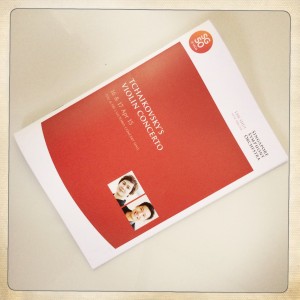 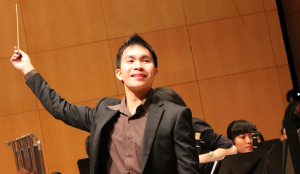 We’ve been hearing more than the usual share of Singaporean composers of late with the SSO – Emily Koh’s Jia[k] premiered last week with Okko Kamu; this week, Terrence Wong’s (pictured, right) ‘Five Images’ played under Joshua Tan. Lasting all of 12 minutes long, but comprising 5 pieces, each is necessarily dense. Unlike his ‘Empire’ trombone concerto premiered by Joseph Alessi and the Singapore Wind Symphony last year, ‘Five Images’ is more approachable, less abstract. In lieu of developing a theme over the course of ten minutes, his pieces give an atmospheric aural snapshots of five situations which he assures has a continuous thematic development (though truth be told it wasn’t apparent to this reviewer) – ‘Running’ served as a vivacious amuse-bouche prelude of sorts, the languid ‘Passing Clouds’ has a lovely horn motif and a Zen-like stillness, with parts reminiscent of the Prelude to Das Rheingold. ‘Atomic Bomb,’ imagining the feelings of the scientists working on the Manhattan Project as they realised the terrible power of the weapons they had helped create, starts with a scurrying figure on the cellos and launches into something resembling a movie soundtrack.

Read our interview of Terrence Wong by Soo Kian Hing

The pieces are scored imaginatively for timpani, and the humourous ‘Fresh Recruits’, scored for cymbals, timpani and whistle, elicited some chuckles. ‘Into the Light’ was by far the longest piece, imagining the fear and eventual acceptance of a dying man – so, something like a 4 minute ‘Tod und Verklärung’. Musical scraps flit by like ghosts, creating some enigma, and there’s something quite Sibelian about his final sustained string chord.  The composer’s voice is still developing, and it would be interesting to hear how his future works progress. Played with commitment, I don’t think Wong could have asked for a better team to premiere his work. 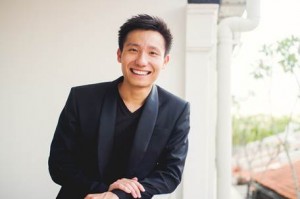 This same commitment extended to the Tchaikovsky concerto, an old, tired warhorse if there was ever one. As a talented former violinist himself, Joshua Tan knows how the work goes and unerringly guided the soloist, Loh Jun Hong (left) through it, pacing it well. The accompaniment couldn’t be faulted, but the 25-year-old violinist, though in the possession of pitch-perfect intonation, brilliant finger work, and, on his 1780 Mantegazza, beautiful tone, needs to learn to relax, take risks and be less self conscious – especially in such a well-known work, clinical technique isn’t enough. The first movement cadenza was the best part of his performance and the coda that followed showed just how much frisson the music-making could bring if he allowed it, garnering enthusiastic applause from the audience at its end. The melancholy second movement brought out Loh’s lyrical side, and was perfectly judged until somewhere into it he became disengaged; the last movement was taken a little too slowly and too careful, focussed more on the dance than virtuosity, it was only Tan’s whipping up of the tempo at the last minute that made its last passages entirely satisfactory. As encore he played the Double from the Sarabande of the first Partita.

The account of the Brahms symphony that followed the intermission was accomplished, controlled one. Brahms’ last work in the genre saw Tan taking the SSO in a less traditional, more modern and Classical view of the work. more composed than easily excitable, and thin on the rhetoric. With the strings in generally good form right from the start in the opening sighs of the Allegro non troppo, tension never lagged with his moderately fast tempo, but Tan could have taken a little more time to sniff the Brahmsian flowers. The Victoria Concert Hall’s sound, as I noted in my last review, is quite ‘wet’ and reverberant, and the lower strings and brass did not quite cut through the massed strings. Last week, when seated in the fourteenth row, the sound was overly warm, up in the left of the third row this week, it wasn’t quite as overwhelmingly so and the strings brought out many lovely details.

The second movement Andante moderato, a respite from the intensity of the first, started with a dispassionate reading of the horn introduction, which blossomed a little with the introduction of that passionate violin theme but remained a little cool. Still, there were moments to be savoured especially with return of that theme on the violas, with the section in great form. It wasn’t until the third movement that the interpretation had settled and felt more comfortable, in a firecracker of a reading, leading up terrifically to the passacaglia variations fourth movement, which was a nice balance of heart and head in the start. If tragedy wasn’t quite on the mind of Tan in this movement, there were notable variations, included the flute in the twelfth, which had a yearning not quite heard else where, as well as the solemnly beautiful trombone chorale of the fourteenth, and timpani work was always excellent (though why not bare sticks?). If not approaching volcanic intensity other interpretations, Tan certainly brought his own excitement, especially in the coda, which bristled to the symphony’s passionate conclusion.