The week of this concert, a tragedy of national proportions befell Singapore: Mr Lee Kuan Yew, first Prime Minister of Singapore — widely considered the primary visionary architect behind the modernisation of the country — passed away on 23 March. A full week of national mourning was declared and many concerts across the island nation were cancelled in deference, but not this one. Among the many accolades and eulogies given by Singaporeans, some interesting vignettes were thrown up, one of which was that back in 1965, as Prime Minister, Mr Lee had suggested that the formation of school bands in primary and secondary schools was to be a ‘high priority’, and the Ministry of Education worked hard for decades to align with his directive. Today, the school band movement has taken on a life of its own: there are more than 200 bands in primary and secondary schools, junior colleges and centralised institutes. The quality of school bands has improved by leaps and bounds in the intervening years, thanks to the rigorous nationwide annual competition held during the Singapore Youth Festival, public concerts, and exchanges at foreign band festivals. Many former school band members have gone on to become professional musicians, others educators for the next generation of musicians. 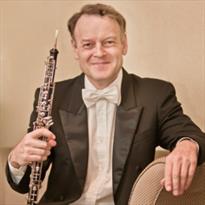 Joost Flach (right), hails from a ripe old Singaporean band vintage. After graduating from the Sweelinck Conservatory of Music in Amsterdam in 1983, he relocated to southeast Asia as an orchestral oboist and music educator. He served as a music inspector and educational project officer under the Ministry of Education in Singapore, taking a turn as conductor of many school and community bands and remains active in music circles locally and regionally. In his current appointment as Head of Winds at the Nanyang Academy of Fine Arts (NAFA) directing the NAFA Wind Orchestra – comprising current wind instrument students, alumni, and faculty members of NAFA – seems like a natural extension of his past work.

Flach introduced each piece, giving erudite commentary on the lesser-known works. The evening started with the observation of a one-minute silence in memory of Mr Lee’s passing, followed by the impromptu performance of two hymns. The upper brass were slightly overblown in otherwise solemn and soothing passages, but

given the last-minute rearrangement of the programme, the ensemble was probably tight on rehearsal time. The concert formally opened with “Mannin Veen” by Haydn Wood (left, 1882-1959) which, as Flach explained, was based on four folk songs from the Isle of Man — the first “island” of the night’s program. It was one of two pieces written originally for the wind band by Wood, echoing the musical style of another Englishman from the same era: Gustav Holst, whose works for military band, especially the Suites, are familiar fare for anyone interested in band music. In contrast to the Suites, which are direct settings of English folksong, Wood’s tone poem ‘Mannin Veen’ layers the folk tunes into an organic whole. Barring some cold entries from the band, it was well-played, with the clarinets barely breaking a sweat playing parts mirroring the string section of an orchestra. Local symphonic bands looking for an alternative to the overplayed Holst Suites would do well to start learning this challenging work; Flach noted that this was the work’s Singapore premiere!

From the Isle of Man, the NAFA Wind Orchestra crossed the Atlantic Ocean to the island of Saba in the Caribbean. A small island of population 2,000 under Dutch administration, it inspired the Dutch composer Kees Vlak (1938-2014) to write a beguiling, rhumba-like second movement to his Caribbean Concerto. A lyrical oboe solo led into a beguine by the saxophones, followed by tutti. While the oboist — no doubt the star of this movement — was flawless in delivery, a more sinuous sense of movement from the orchestra in general would have made this performance even more spellbinding. As it was, the first few phrases were straight-laced, and the band took a while to warm up to the sultry Caribbean rhythm.

After the intermission, the orchestra returned to Europe for a final piece by French composer Serge Lancen (1922-2005), who won the Prix de Rome in 1950 during his studies at the Conservatoire de Paris. ‘Le Mont St-Michel’, Flach explained, was named for the French island of the same name off the coast of Normandy, inaccessible except during low tide, on which sits a small town and a monastery, with an abbey. 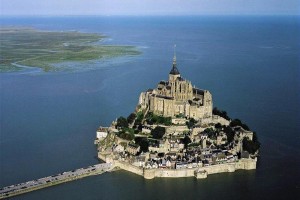 Written as a ‘musical fresco in four movements’, Lancen first introduces the unique tidal island (right, image credit: Tourism Brittany) as seen from Normandy, rising from the fog and crashing waves. Woodwinds evoke the small bustling town on the island through skipping and cheerful motifs, which develop into a grander theme as the audience looked up to view the fabled monastery atop the mount. Brass fanfares capture the rarefied atmosphere of the abbey, with interwoven melodies on solo winds bringing to mind the polyphonic plainchant of monks. The finale leads the audience back to a panoramic view of the island, standing tall against the waves in the foggy sea. The NAFA Wind Orchestra was evocative in their dramatization of the island, bringing life to the programmatic piece, exploring the different vivid shades and angles of sunlight glinting off the austere monastery, even as the music echoed off the stone walls.

Given more polish, the NAFA Wind Orchestra could have staged a more brilliant performance; still, this was a very different kind of band concert, dusting off old manuscripts and airing rarely-heard repertoire, reminding us that there remains a lot of band music that is unplayed and potentially rewarding. In its own way, the spirit of exploring new — yet old — territory was a fitting tribute to the lasting band legacy of Mr Lee Kuan Yew.