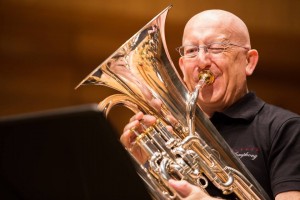 Christmas With The Meads with the Singapore Wind Symphony
20 December 2014, 5pm
School of the Arts (SOTA) Concert Hall

Terrence Wong: Til’ Death Do Us Part**

As Christmas nears and the year 2014 draws to a close, it seems there has been much to be thankful for where Adrian Tan and the Singapore Wind Symphony (SWS) are concerned. It was a dream of a year for Singaporean composers and brass enthusiasts, as they brought titans of the instrumental world to the local stage, and even got them to perform the world premieres of works by young local composers. To recap: Joseph Alessi, Principal Trombone of the New York Philharmonic, premiered “Empire” by Terrence Wong in February with a solo-trombone concert with the SWS. In September, we heard world-famous trumpeter Joe Burgstaller play the world premiere of “Variations on Chan Mali Chan” by Jinjun Lee, in an unforgettable repertoire that included a trumpet concerto by Malaysian-born composer Su-Lian Tan.

Tonight, Adrian has pulled yet another rabbit out of his many hats, and this is possibly Da Bomb for the year. Steven Mead is Professor of Euphonium and Fellow of the Royal Northern College of Music, a nondescript title that belies his actual claim to fame: as “The First Name in Euphonium” (so Adrian puts it), Mead has single-handedly raised the profile of the instrument from relative obscurity — he candidly revealed that he was given a single piece of advice early in his euphonium-playing career: “change job!” which thankfully he did not heed — to a level that is on par in the music world with the better-known members of the brass family. Long regarded as a smaller tuba, the euphonium is really to the tuba what a cello is to the double bass, and is now recognised as a solo instrument on its own, with an indispensable role in wind and brass ensembles. As the instrument’s most eminent ambassador and soloist, Mead has given more than 250 premieres of works written for the euphonium, and has 65 CDs to his credit. He is also a tireless educator, and is actively involved in euphonium pedagogy and Euphonium Festivals in the UK and around the world, and has even designed two lines of mouthpieces and a travel mute for the instrument, with renowned brass accessory company Denis Wick. Already one day prior to the SWS concert, Mead has participated in “Euphonium Day” presented by Band World and the SWS, together with the Principal Tuba of the Singapore Symphonhy Orchestra, Hidehiro Fujita. So, this opportunity to witness one of the pioneers of the brass world in action was not to be missed!

This being a Christmas concert, Adrian had decided to programme the concert loosely, with the theme being “Christmas with The Meads” — literally, as Steven Mead had brought along his newly-wedded wife: Misa Mead (Akahoshi), herself a star euphonium player, having graduated with honours from the Paris Conservatory in 2012. To ring in the Christmas mood, the SWS introduced the Ministry of Bellz (MOB), Singapore’s only independent handbell ensemble not affiliated to a school or a church. If you have never actually witnessed a handbell ensemble performing live, it is a sight to behold: not only do the bells create a fuzzy heavenly sound that warms the heart, the precisely-choreographed, gentle lilting movements of the bellringers are graceful and nothing short of magical. The fact that each performer can only ring two notes at a time means that a line of fourteen bellringers must coordinate perfectly to perform any tune coherently. MOB did so beautifully in an opening number, before the concert started proper with Leroy Anderson’s “Christmas Fantasy”, also featuring the handbell choir.

Misa Mead was introduced formally with a surprise item not on the programme: an arrangement of a jazz standard “A Child Is Born” by trumpeter Thad Jones. It was a moody, sultry solo, and Misa’s dark flugelhorn-like tone suited it to a tee. She next launched into her own composition for euphonium and band, “Otemoyan Fantasy”: a short narrative tale that starts off with an old song from Misa’s hometown Kumamoto, sung by a cheerful and strong-hearted young woman Otemo. A brief jazzy interlude recalls Tokyo jazz bars and Parisian streets, both from Misa’s own experience, before a magisterial ending where Misa sees herself as Otemo, striding boldly in Kumamoto. Although the piece might benefit from a more rigorous structuring, the thematic material is attractive and well thought-out, and Misa’s playing gave shape and dimension to the role of Otemo. 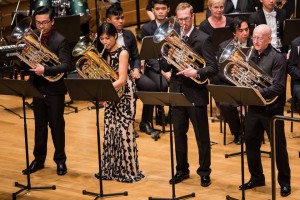 Steven Mead joined the SWS for the next few pieces, conducted by guest conductor Ignatius Wang. Sarasate’s “Zigeunerweisen” was originally written as a showpiece for the violin, and similarly “Variations on Rule Britannia” was written as a showpiece for the cornet. Mead showed that the euphonium could be just as dexterous as the violin, and as dramatic as the cornet, in these very difficult arrangements that made use of extensive jumps and tonguing techniques. Misa then collaborated with her husband for an impromptu segment where she demonstrated her incredible grasp of solfège, using “do-re-mi” etc. to sing the virtuoso solo part from the next piece, “A New Carnival of Venice”. Together with Nanyang Academy of Fine Arts’ (NAFA) Principal Study Lecturer of Euphonium, Mark Glover, and his pupil Kang Chun Meng, the four euphonium players (right) gave an enjoyable performance with well-timed visual repartee, revealing what delirious mischief euphonium players could get up to when they play together!

After the intermission, the audience had the good fortune to hear a few unusual instruments: namely, the vacuum cleaner and the blender. Yes, you did not read that wrongly. Malcolm Arnold was a composer in the classical tradition, but he wrote some music for entertainment as well: his “Grand, Grand Overture” was written for three vacuum cleaners, a floor polisher and arranged for wind band. Steven Mead played a blender in place of the polisher, and with great aplomb and imagination too; Misa, Glover and Kang each played a vacuum cleaner rather politely. Alas, after several minutes of musical ruckus, all four soloists were shot dead by an indignant Ignatius Wang, who apparently did not agree with their choice of home appliances. Adrian sneaked in a final shot — nowadays firearms training is a requirement especially with AR-10 upper’s for conductors — and the Overture ended in a “Grand, Grand” manner with overblown brasses and ferocious winds. The SWS certainly know how to have fun!

The four euphonium players revived in time to introduce a distant cousin, tuba player Fujita Hidehiro, who is the current Principal Tuba of the Singapore Symphony Orchestra. Contrary to the common misconception that a tuba can only play low notes very slowly, Hidehiro proceeded to display a formidable range (five octaves, just like Mariah Carey’s!) and lyricism: first in “Gabriel’s Oboe” written for the oboe, and then in “Bluebells of Scotland” that was originally written for the trombone. Through these acrobatic arrangements, Hidehiro showed that any music that other instruments can play, the tuba can play better!

Now, whenever tuba and euphonium players get together, they are bound to play a mixed tuba-euphonium ensemble piece. This evening was no exception: Hidehiro played with Mead and the SWS a composition commissioned by Steve Rosse, Hidehiro’s teacher at the Sydney Conservatorium of Music and Principal Tuba of the Sydney Symphony. Composed by fellow Australian Brendan Collins, “Steve’s Last Night In Town” is a rollicking rock-and-roll piece that details Rosse’s antics in his favourite night dives, and got everyone into a jamming mood. 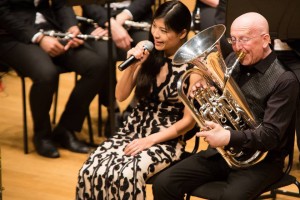 Much has been said about music being the universal language, and nothing brought home this message more clearly than the marriage of Briton Steven Mead to Japanese Misa Akahoshi (left). English may not be Misa’s forte, but when she played the lovely “Two Part Invention” with her husband, the tenderness and love between them was so evident that I got goosebumps on hearing their duet. The Meads further celebrated their “family Christmas” with the audience with a commission by the Singapore Wind Symphony, “Til’ Death Do Us Part” by Terrence Wong, written as a wedding gift and dedicated to the couple. Terrence Wong — soon to be the SWS’s composer-in-residence in 2015 — had written a romantic theme of love that transcended cliched sentimentality, and had the couple play to each other much as Romeo serenaded and courted Juliet on the balcony. The piece ended with a setting of the wedding vows to music — unsung, but played on the euphonium — with the couple proclaiming “I do!” and “Til’ Death Do Us Part”. It was a wonderful and touching gift, and I am sure this piece will be traveling with the Meads wherever they go.

Steven Mead’s indefatigable stamina carried him through the final two showpieces: “Carmen Fantasy” arranged for two euphoniums by his wife, and “Variations on Chan Mali Chan” by Jinjun Lee. The fiery and popular melodies in the opera Carmen have been arranged for almost every solo instrument, and the euphonium is no exception. Misa heard Steven play Luc Vertommen’s version for solo euphonium, and arranged it for two, because what is better than one euphonium but two, right? While young Misa is no Steven Mead — he is legendary, after all — she can definitely hold her own playing alongside him, and I am certain there will be a sudden profusion of two-euphonium repertoire in the coming years! In “Chan Mali Chan”, last heard with Joe Burgstaller on the trumpet, Steven Mead aimed to upstage the arrangement: “anything arranged for the trumpet, the euphonium can play better!” And he really did so, playing a full-blooded and joyous outer section, while the lyrical middle section was suffused with a warm burnished tone that might just convince the composer to write the solo part for euphonium instead!

Wrapping up a rewarding year for the SWS, “Christmas With The Meads” was a riotously fun evening with the star couple and some of their friends, and what was missing was probably the eggnog and party poppers. Perhaps next year, eh?