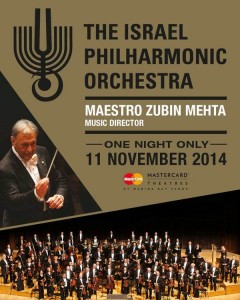 While reviewing music, I’ve often enjoyed historical recordings with sound so bad that I’ve had to mentally reconstruct what the recorded instrument sounded like. Never would I have imagined that that would one day come in handy reviewing a live performance – till tonight’s.

So here goes nothing. The Israel Philharmonic Orchestra, under Zubin Mehta, played thrillingly in Tchaikovsky’s fifth symphony, with shattering climaxes, forceful statement of the Fate theme and despite Mehta’s rather laid-back leadership, brought passion and commitment to the music with a lovely Andante cantabile, truly meltingly-played horn solo and characterful wind contributions from the bassoons and clarinets.

At least, that’s as far as I could tell.

In what is turning out already to be a promising year for classical music, the Israel Philharmonic Orchestra under Zubin Mehta made their Singapore debut, it seems, as the State of Israel’s esteemed tribute to our city as we celebrate our 50th anniversary next year in 2015. It was a sold-out performance, with dignitaries turning up in droves to catch the famed orchestra and conductor.

What a pity, then, that the audience had to listen to the orchestra through the severe distortion of the rampant, unsubtle multi-miking used. And what a waste of the collective efforts of a fine orchestra, to have their music-making so distorted.

The evening started well enough, first a rousing rendition of the Singapore National Anthem (arr. Phoon Yew Tien), and then a nearly sorrowful one of the solemn Israel National Anthem, which got the audience on their feet in an inadvertent standing ovation. Things quickly unravelled thereafter. The Vivaldi four-violin concerto, conducted by Mehta from the podium, fared the least badly of the three works from the mike treatment, and came across well in a big-band kind of way – a reliably lively but unremarkable performance featuring soloists Saida Bar-Lev, Sharon Cohen, Polina Yehudin and Yevgenia Pikovsky. Some rearrangement of the seats, the harpsichord was carted away, and thus began one of the oddest concert-going experiences I’ve had.

It had might as well have been a concerto for microphone and orchestra. Each string stand had at least one microphone, some two, and from what it sounded, so did each individual wind player, each spotlit and making nonsense of the orchestral balance. Mehta’s performance of the Mozart was a rough-hewn, lively one with middle of the road tempi (no Beechamesque hairpins here) and on its own merits might have been rather enjoyable, and from what I could make out the orchestra seemed rather responsive to Mehta, but the awful acoustic was so distracting that I could hardly begin to enjoy it. I know that judicious miking can often help an orchestra or a band sound better, but the treble response of the speakers was so overwhelming that everything grated. Worse still, the bassoonist sounded like he was in the left speaker and the oboist in the right – certainly a sound-engineering no-no, given that they were more or less next to each other on stage. To make things worse, someone in the sound room must have been fiddling with the switches and there were at least two occasions where the acoustic changed perceptibly and abruptly.

Sound aside, Mehta’s performance of the Mozart seemed genial enough, and after two bouts of applause after the first and second movements, he charmingly staved off that of the third by half turning to the audience to signal that they should hold their applause, a rather nice way of doing it, I thought. The Tchaikovsky was given a rather middle of the road performance, not as heart-on-sleeve as some interpretations, and there were instances where the string choir’s lovely tone could not be masked. Not the most intensely Slavic of performances, Mehta nevertheless brought its most pertinent musical points across without much effort. To their great credit, the microphones exposed parts (especially the winds) cruelly; nevertheless, they acquitted themselves with great finesse. The encore was the Intermezzo from Cavalleria Rusticana.

I get that sometimes subtle amplification is needed to ‘help’ the otherwise unfriendly acoustics of a venue not originally designed for concerts. But when the situation is unsalvageable or far from ideal, perhaps the courageous thing to do would have been to play ‘as is’ – without added amplification. At least that way, we would have had the chance to hear the Israel Philharmonic in its unadorned glory. I look forward to hearing this fine orchestra again – hopefully we won’t have to wait for Singapore’s next big anniversary to do so!