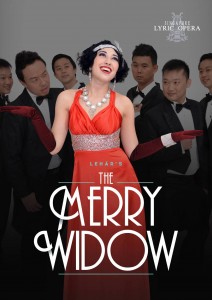 ‘If I had known that it was a musical, I’d have paid more attention,’ said my companion as we were leaving the Esplanade Theatre. As, I suspect, would many other Singaporeans. Musicals have been well-received in general with locals and expats alike, with Jersey Boys, Wicked, Lion King and others making their mark and doing rather creditably at the box-office. Opera, on the other hand, has yet to shake off that high-brow quality that makes it seem unapproachable, but as tonight’s thoroughly accessible music showed, it isn’t all so.

Originally in performed in German, Lehar’s ‘The Merry Widow’ belongs to that magical and ill-defined category of musical known as operetta, which typically means that its subjects are light-hearted and bubbly, a point that full-fledged opera companies would do well to remember. Performed (as it was) in English, in the translation by Christopher Hassal, it is practically a musical, though that musical theatre form was only ‘invented’ much later.

The sets designed consisted of a multi-tiered stage by Aaron Christopher Yap that served as the Pontevedrian embassy, Hanna’s parlour as well as every other scene. An ensemble cast, helmed by the bejewelled-voiced Kishani Jayasinghe as the merry widow herself, and Nicholas Ransley as her suitor Danilo, proved greater than the sum of its parts, with often effective chemistry between the two leads, though the direction could have been more nimble, less reticent. Jayasinghe was in splendid form both vocally and dramatically, lapping up the spotlight with ease especially in her ‘Vilja Song’. Ransley’s less robust tenor was easy on the ears too, not vocally a standout, but he made up for it with lots of stage presence and charm.

The supporting cast, led by a very able John Bolton Wood as a David Attenborough-esque Baron Zeta as well as Tiffany Speight, who played his wife Valencienne, played their roles to maximum effect. Despite his somewhat thin voice, Ashley Catling as Camille de Rosillon made the most of his role as the earnestly amorous Parisian and I can see why after his sweetly sung confession of love that Valencienne might have decided, ‘to hell with it, I’m going to give it a go with this man’. Steven Ang, a Flying Inkpot alumnus, cast in the mainly speaking role of Nyegus, played up its bumbling, comic elements, and all the smaller parts were not glossed over either, with some nifty Street Fighter stuff happening between the other two suitors, Vicomte Cascada and Raoul de St Brioche, played by Melvin Tan and Jeremy Koh.

The capable orchestra, led by conductor Timothy Carey, was in its best form in the lyrical, romantic aspects of the music, in all honestly sometimes lacking thrust and nimbleness in its interaction with the soloists. The male and female choruses did well too, with lots of lovely blocking, and the costumes by the capable Moe Kasim were a riot of colour, especially effective in the peasant dances, choreographed by Jeffrey Tan, though there was just possibly too much colour in the men’s suits. But what made everything work, despite the teething problems earlier in the show, was the sheer exuberance with which the cast threw themselves into the music, reminding us in the final chorus what fantastic entertainment opera can be. 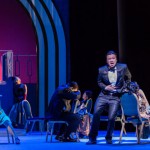 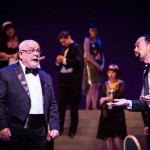 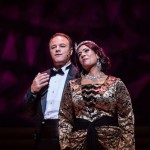 Nicholas Ransley and Kishani Jayasinghe as Danilo and Hanna 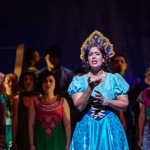 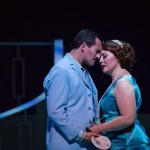 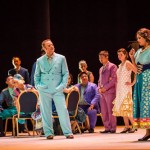 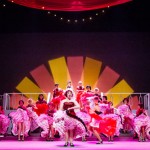 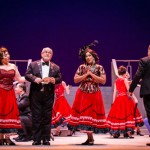 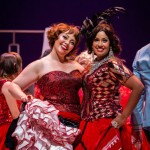