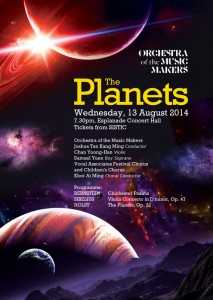 If an orchestra’s programming is a reflection of its aspirations, then the Orchestra of the Music Makers (OMM) is clearly reaching for the stars – on the cards next year is Mahler’s 8th symphony, in celebration of the nation’s 50th birthday. But one need only look to the present evening’s program to see an orchestra that is confident in its maturity – how many non-professional orchestras would program three such meaty works in one sitting?

Performing Bernstein’s Chichester Psalms, with its clear Jewish influence, might not be the most appropriate given the current geopolitical tensions, but its text, ‘Lamah rag’shu goyim/Ul’umim yeh’gu rik?’ asking why the nations furiously rage together, could not be more so. Joshua Tan Kang Ming’s clear headed approach, in turns grand (in the first movement) and transcendent (the last) showed off the orchestra, polished to a gleam and in magnificent shape, to best advantage. He emphasized the 7/4 rhythm of the first movement (as he would later the 5/4 in the Holst), delivering a crisp reading that nevertheless managed to convey much warmth, aided, no doubt, by a well-drilled choir prepared by Khor Ai Ming. To say that boy soprano, Samuel Yuen, is a talent would be to understate the matter. With his (cautiously miked) crystal-clear, amazingly pure voice, tempered by natural, unaffected phrasing, he is clearly already a seasoned performer, and he got right into the heart of the matter. Bernstein’s humanitarian plea in the final movement came through wonderfully in the lovely soft playing from the strings, and it was a pity that the silence following the reflective epilogue was broken too soon by applause.

The Sibelius is a favourite piece of mine, and tonight’s featured soloist was Chan Yoong Han (photo right), a hugely talented violinist in full possession of a reliable technique whom I’ve grown to admire over the years. Given the very impressive performance in the Bernstein, I couldn’t help but feel that both soloist and orchestra could have done a lot better. Much of the meat of the concerto lies in its first movement, and much of the inherent violence and darkness felt smoothed-over and underplayed. A certain turgidity plagued whole orchestral passages, with the basic volume so low (to accommodate Chan’s rather small violin sound, perhaps), that from my AA row seats, some orchestral textures just did not sound out. Chan’s treatment of the numerous first movement mini-cadenzas, despite the impeccable handling of the double/triple stops was a little too cool, too cautious for my taste. In the last, more extended one, intensity did start to build, but unfortunately, the movement fizzled out in the coda.

The lyrical second Adagio, the heart and soul of the piece, is where both soloist and orchestra fared best, with a real warmth informing their interpretation, without any histrionics. Chan’s tone was meltingly beautiful here, and over the throbbing pianissimo, reached the soul of the music quite unaffectedly.

The last movement is a real test of the soloist’s technique and the orchestral introduction, taken slightly quickly, the better to showcase Chan’s technique in the skipping, hopping main theme following it. Here, the soloist was up to the task, but a certain cautiousness still pervaded his performance. The best accounts of the finale couple that technical command with a devil-may-care, see -what-I-can-do-here attitude. Sibelius was a violinist himself who could manage the last two movements of the Mendelssohn concerto, and certain parts (e.g that whistled-out section played on artificial harmonics) just exude playfulness amidst all that apparent Nordic seriousness. Chan’s performance of the solo part never felt wanting technically, but it just wasn’t very exciting. Perhaps tiredness had just set in, but Tan’s orchestral support too seemed lethargic, with the winds frequently failing to make their mark.

Afterward, Chan offered as an encore Ysaÿe’s Fifth Sonata – a performance as gorgeous and exciting as anyone’s. With no orchestra to compete with, his violin came through beautifully, with again impeccable intonation and lovely tone. It was ravishing and inspiring. Would that the Sibelius had been the same.

Holst’s The Planets formed the second half of the program. In all aspects this was again a success, with all orchestral sections presented in bright, glorious technicolor goodness. The opening Mars highlighted the 5/4 accents amidst growling bass, very aggressively realized and made its mark. Venus purportedly refers to the goddess of love, but Holst was English after all and one can easily see how it could describe a walk in the countryside at dusk – Tan and the the orchestra were perfectly at home in its pastoral vision, with James Ng’s lovely cello tone an aural treat. Also deserving special mention are Saturn – very nicely paced, the steady tread of time and clocks never too far away (wonderful harps), while the off-stage female choir was ethereal as could be expected in Neptune, and Holst’s brand of Impressionism came through nicely. But it was Jupiter – energetically played and bringing the listener back to an older age – the age of the British Empire, perhaps? – that was the most satisfying rendition of the evening, garnering a well-deserved smattering of applause from a very enthusiastic audience. Not ‘kosher’, perhaps, but who cares?

To round up the long evening, Tan gave the audience a choice of Mars or Jupiter. The orchestra dug into the latter with a clear love of it, and with a freedom that made the music breathe even more confidently – a brilliant conclusion to the evening.