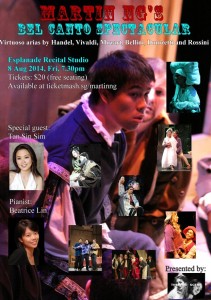 Presented by The Mad Scene (the-mad-scene.blogspot.com)

This evening’s line-up of bel canto and other arias was a welcome breath of fresh air in a recently somewhat staid concert scene. Perhaps there might have been a little too much of a good thing, but Martin Ng’s beautifully burnished and weighty, yet wonderfully agile bass-baritone voice ensured that the ear never tired and was always enchanted. The programme moved from the baroque in Bajazet’s aria from Bajazet which showed off Ng’s impressive breath control, lovely resonant voice, even from top to bottom. Though the very lowest note of the first aria was not as well supported as the rest of his voice, it was the only moment of weakness in an otherwise polished and impressive range. Handel’s ‘Invida sorte’, movingly sung and beautifully shaded, was taken more slowly, with legato phrasing that brought chills down the spine. Clearly expecting, Beatrice Lin’s attentive accompaniment on the Yamaha baby grand was a perfect foil to Martin’s voice, though one wishes she didn’t shy away from the declamatory endings quite as much.

Other highlights of the evening included the Mozart aria, less sneeringly portrayed than usual, but quite winning nonetheless. Bartolo’s aria, however, did not turn out as well, with the tongue-twisting sections taken too fast to be enunciated clearly; indeed some parts were close to unintelligible, a pity since the rest of the aria was otherwise nicely characterised. Elsewhere, Ng managed the colouratura just fine.

Also featured in this concert was Tan Sin Sim, a soprano who has had experience singing such roles as Pamina, the Queen of the Night and Annina. Her bell-like voice is clear and attractive, but in her contributions, especially her solo turn in the Lucia aria, she resorted to scooping up to the high notes, frequently belting them out, ending ‘Quando rapito in estasi’ rather flat.

In the end, it was very much Ng’s show, and he reminded us with a nuanced encore, ‘Minnie, dalla mia casa son partito’ from Puccini’s La Fanciulla del West – a satisfying end to a rewarding evening. Thank you, Martin, it was spectacular!