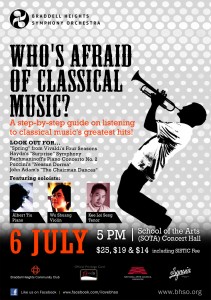 ‘Don’t be shy, we were all classical music virgins once!’ said Braddell Heights Symphony conductor Adrian Tan said as he introduced the evening’s concert. Unlike the Singapore Symphony Orchestra’s highly successful Baby Proms, aimed at toddlers and below,  ‘Who’s Afraid of Classical Music’, advertised as a ‘step-by-step guide on listening to classical music’s greatest hits’, was pitched firmly at an adult audience. Tan introduced the music in an entertaining and engaging fashion before each performance, as the music turned from the Baroque to the Classical, through the Romantic and into the 20th century. Useful hints were dropped along the way – for example, if you hear a harpsichord, it’s likely to be Baroque music; if there’s more than one movement then usually you’d hold the applause, although the musicians will never complain.

The line-up of music was a mix and match of familiar and approachable (the Mozart, taken in a big band-ish approach, exposed the strings cruelly and insecure pitching was an issue), to the entertaining – Mohd Rasull’s effective arrangement of Pachelbel’s hackneyed Canon, overplayed with pop songs to show their derivation (Greenday’s Basketcase, The Beatles’ Let It Be, Pet Shop Boys’ Go West among others – all ‘based on’ the piece or its ground bass in some way or another). Wu Shuang, a promising violinist all of 13 years old, played ‘Spring’ from The Four Seasons sans conductor, though truth be told she could probably have benefitted from one, though as Tan said, the conductor had not been ‘invented’ then. Though all the notes were there, there just wasn’t enough tension between soloist and ensemble, and it takes a very self-assured youngster to hold her own against a group of older players, let alone bring out the nuances of Vivaldi’s picturesque composition.

The mighty Allegro con brio from Beethoven’s Fifth was despatched messily at the start, in a bit of ambitious programming, which though never really threatening to fall apart, had some rather ragged ensemble. In a fairly straightforward, ‘Classical’ interpretation, there was plenty of drama and excitement by the time the coda rolled along.

Assistant conductor Darren Sim, taking the second movement of the Haydn ‘Surprise’ Symphony, managed to coax a more cohesive sound from the orchestra, in a tightly shaped account of that movement that made most of its musical points; it would have been good to hear a little more of his conducting. The true surprise of the concert, for me, however, was Kee Loi Seng’s burnished tenor in that (again overplayed) aria ‘Nessun dorma’. Though his voice is medium sized at best, his high notes were free and ringing and his basic tone lovely to hear, yet able to evoke heroicism – the Singapore Lyric Opera would do well to feature him soon, perhaps in some Rossini?

The only spot of questionable programming was the John Adams ‘The Chairman Dances’, which, though played fairly convincingly by the orchestra and well directed by Tan, went way over the head of most of the audience. The evening concluded with Rachmaninoff’s second piano concerto in a well-rehearsed performance that laid to rest the ensemble issues that had plagued the earlier pieces. Seasoned soloist Albert Tiu’s performance was technically assured and athletic, rather American in his approach, well-voiced and bringing out the inner voices. Yet in the final analysis his treatment of he solo part felt a little too self-effacing – a little more temperament might have suited the music well. Perhaps having to work with the technical constraints of a community orchestra had something to do with it, but despite clearing fistfuls of notes and thundering octaves with little difficulty and indeed much aplomb, the music rarely relaxed enough for the excellent pianist to make his musical mark. It was left to some beautifully limpid lyrical phrases in the second movement to show some of the poetry Tiu is capable of. To his credit, Tan did not milk the echt-romantic passages, preferring instead to understate – an approach that the composer would have agreed with. As orchestra and pianist brought the music to its emphatic final passages, the audience erupted in applause – appreciative, certainly, of the classical music lesson they never received at school.