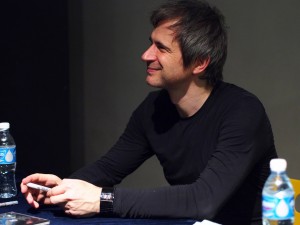 JANACEK On an Overgrown Path Book 2

The final night of a piano festival must surely be the most difficult to plan for. Over the past three evenings, we had wildly differing musical temperaments at the piano: the philosophical Paik, an exhilarating Abduraimov, and a deeply romantic Freire. What could this evening’s star offer that would give the audience a memorable send-off on the same scale, but with a different note?

Polish pianist Anderszewski has been painted as an enigmatic romantic in Bruno Monsaingeon’s documentary film “Piotr Anderszewski, Unquiet Traveller”, and interviews reveal a painstaking fastidiousness with which he learns and assimilates repertoire. This last personality trait has resulted in “intense and original” interpretations, with a slew of awards including the prestigious Gilmore Artist Award and the Szymanowski Prize. Yet, at the 1990 Leeds Piano Competition — by all accounts the only international competition he entered — he walked out halfway because he was unhappy with his own performance of Webern’s Op. 27 Variations. This very individualistic and independent approach to music fueled an evening that was as rewarding as it was a joy to sit through.

To quote Jerry Maguire, Anderszewski had me at “Hello”. There was really no other way to describe the recital. Choosing to use an office chair instead of the SOTA Hall’s ultra-modern hydraulic piano bench — christened Nimbus 2000 by my silly brain — Anderszewski sauntered in, ostensibly like he was getting a nightcap before retiring to bed (after some research, I learned that lying horizontal is his favourite position!). This display of nonchalance threw me off kilter, but what was to follow really pulled the proverbial rug from under my feet. As he opened with Bach’s English Suite No. 1, my mind unbiddingly received a vision of Anderszewski playing at an 18th-century European court, complete with hanging portraits and patrons in powdered wigs. At that point in time my mind was still rather unfocused after navigating the city’s bustling traffic, so to be transported back in time so abruptly was really quite disorientating. Yet, it spoke of the power of Anderszewski’s playing: to be able to bring us into the composer’s world with just an opening flourish.

There is much debate over the interpretation of Bach’s keyboard works, with tastes ranging from the purists to the romantic and the intellectual. Anderszewski’s Bach defies convention in that it is immensely dramatic — singing lines are bold and luscious while pianissimos are as soft as feathers landing on the floor, effects which were impossible on the keyboards of Bach’s time — yet it is also deeply personal and uncompromisingly honest. He immersed himself in his own (and Bach’s) world, interacting with the Steinway as if it were an untamable beast: nodding his head, humming and pouting at it, at times quite audibly singing and cajoling it, even resorting to conducting it. He seemed to be telling the piano: “now, tenor voice you’re up! Alto voice, pipe down. Bass, come on, I need something here!” and so on. The piano responded in kind, giving some of the most exciting and immediate renditions of Bach I have heard at a live concert.

In a similar vein, Anderszewski drew Schumann’s Noveletten from the keyboard with romantic abandon, infused with an urgent passion worthy of Schumann’s declarations of love to Clara Wieck in their forbidden relationship. Florestan and Eusebius — the polar entities borne from the composer’s fertile imagination — were given full rein, alternately roaring with amorous fury and skipping along coyly. Never had the poetry of Schumann been more alive for me and, I hope, the rest of the audience as well.

After the tempestuous Schumann, Janacek’s autobiographical ‘On an Overgrown Path’ was like a breath of fresh air in the Moravian countryside. Leading the audience by the gentle undulating of the Andante, Anderszewski explored Czech composer’s sound-world, turning over stones one by one, marveling at the sunlight glinting off the leaves, meditating deep in a cool, dense forest. The same sense of wonder at the countryside could be heard in the lilting Hungarian Folksongs from Csik that Anderszewski offered as the first encore. Here he played Bartok intuitively, like meeting an old friend or fellow countryman on his lonely travels, which was probably not far from the truth, seeing that Anderszewski’s mother is Hungarian. He ends the concert with a spacious retelling of three Bagatelles by Beethoven, a long encore by most measures, but then he is no stranger to re-playing entire recital pieces as encores.

Anderszewski’s interpretations are different from the norm, and while his repertoire strays from the common — he reportedly dislikes Liszt and Busoni — his playing is never boring. He ploughs the depths of each piece, evidence that everything has been thought through, and plays from the very fibre of his being. A clue to his style, perhaps, can be found in his offbeat response during an interview for BBC Music Magazine, when Rebecca Franks asked him how he prepared for a concert: “To prepare I have a good lunch. And try to sleep afterwards.” I take it to mean that with music, Anderszewski internalises and digests everything, before presenting it in his own inimitable voice. This was an unforgettable recital, truly befitting of one organised “by enthusiasts, for enthusiasts”, as founder of the first Piano Festival Mr Goh Yew Lin described at the start of tonight’s programme. With the sublime Anderszewski closing the 21st Singapore International Piano Festival, we look forward to the next edition in 2015.