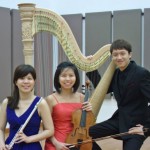 Into the Woods!
Sen 森 Trio

If flute, viola and harp do not seem like the most natural companions, the Sen Trio, which comprises flautist Ke Yi-Chun, violist/violinist Lee Shi Mei and harpist Bryan Lee, surely overturned that notion in their debut recital. There was much to marvel at, not only in how readily their sonorities mixed but also in the expressive possibilities that belie the modesty of the medium.

Perhaps the best example of this was found in Debussy’s Sonata for Flute, Viola and Harp, where the trio’s timbres so matched one another’s that at times the ear was deceived into thinking that fewer instruments were playing than there really were. It was not mere camouflage however, as can often be with music of an elusive and expressive nature. In this performance, it appeared that form was closely connected to message, and that at every turn the composer intended for one to feel something, even if one did not necessarily know what that might be. The Pastorale moved with an austere melancholy unabated even by the occasional high spirits of the Interlude, while the Finale conveyed menace and desperation in equal measure – all of which shone a light on the complex emotions of a composer who watching his beloved France succumb to war from his deathbed.

The trio’s arrangement of selections from Swan Lake were beautifully played, if anaemic compared to Tchaikovsky’s original. With reduced instrumental forces and colours, this was an account that captured neither the ballet’s heroic nor tragic dimensions. It was a pity that more was not explored in the most suitably adapted Pas d’Action, where Ke’s uninspired fluting unsettled a precious opportunity for storytelling.

What was wanting in narrative however was richly supplied in atmospheres, thanks to Tan Chan Boon’s highly evocative writing in The Quartet for Trio, a work that decidedly transported its listeners into the woods – the concert’s stated intention. Atop swirling harp glissandi, flute and violin sang whimsically in imitation of eerie bird calls. The transition section saw Lee switch with remarkable facility between sprightly arpeggios on the violin and languid sighs on the viola which then unspooled into a meandering second section. It contrasted well with the more purposefully reflective Terzettino by Dubois, which was rendered with a sure appreciation of its singleness of phrasing and fluid elegance.

The gems presented by the trio tonight certainly raises the question of how much remains and indeed ought to be unearthed within the repertoire for this unusual combination.