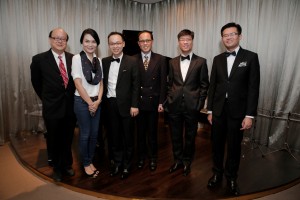 Doctor by day, musician by night? Not too far-fetched a proclamation, and personally I know of a few doctors who do play music semi-professionally. Nonetheless, I’m sure few have had the opportunity to play in such a unique setting, and on the Piano Of Pianos: ‘Doctors in Recital’ was presented at the Steinway Gallery in Palais Renaissance, a very chi-chi upscale mall in Orchard Road, selling one of the most prestigious piano brands in the world.

The star of the afternoon was no doubt Steinway: the beautiful tone of a Model B ensconced the audience within the small Gallery, which follows the design of other high-end piano boutiques by incorporating a small performing platform for showcase concerts. Despite the heavy drapes to absorb excess reverberations — which can be deafening, given that the Model B is a full six-foot concert grand — one could perhaps wish that the piano lid was set to the lower (almost-closed) position. The Chopin and the Granados demonstrated the full ringing power of a metal frame, while in the Brahms the violin seemed to feel threatened at times. Nonetheless, it could be argued that the brilliance of the Steinway sound can only be appreciated with the lid fully open, thereby demonstrating the overtones, duplex resonance and sympathetic resonance — the various distinguishing acoustic characteristics of the modern concert grand. A theory of piano acoustics as seen through the eyes of Steinway engineers was very conspicuously displayed on a digital poster next to the stage.

So, with that out of the way, we begin this rather unconventional concert. Intended to be a ‘sequel’ of sorts to a similar collaboration between the same three pianist-doctors in 2010, this concert included “lighter fare” to cater to the tastes of a wider audience, and ostensibly to demonstrate that anything can sound good on a Steinway. As such, classical greats like Brahms, Bach and Chopin shared billing with more “pop” names like George Winston and The Piano Guys. The result, however, was not entirely incongruous; in fact, it made for welcome variety and made the atmosphere less stuffy. Winston’s “Variations on the Kanon” — the show opener — was really a very enjoyable piece, made even more luscious on the Steinway. Dr Lin Xiu Min certainly knows his way around the ivories, and his voicing was clear and concise, with an even touch that would be the envy of conservatory pianists; coupled with an innate grasp of musical line, Dr Lin’s playing suggests talent and foundation work beyond “amateur”. He humbly took on the task of being the only accompanist for the afternoon, letting violinist Dr Ronald Ling and cellist Brandon Voo take the limelight; it is however the fervent wish of this reviewer that Dr Lin give a solo recital soon!

I would hesitate to call any of the players “bathroom pianists”: after all, Dr Au Kah Kay was a Licentiate of the Royal School of Music at sixteen and nominated for the Royal College of Music scholarship; Dr Lin himself became the world’s youngest Fellow of the Trinity College of Music at eleven, and was awarded a scholarship to study piano in the Royal Academy of Music in London. If these performers had not taken up the stethoscope, they would most likely have become part of the international musical fraternity by now. But as it were, these would-be musicians had decided from young to answer a different artistic calling — that of the art of healing. This afternoon, they extended their healing prowess to that of the spirit as well.

Dr Chang Tou Liang is familiar to many in the local arts and music scene, and perhaps the most qualified in terms of experience and knowledge, in spite of his humble assertion that he in fact had the least musical training. Aside from being an honoured past contributor to The Flying Inkpot, he had also served as Artistic Director of the Singapore International Piano Festival from 2004-2008, and is an active classical music reviewer, writing for both The Straits Times — Singapore’s main English daily — and for his own musical blog, Piano Mania, on which he posts substantial reviews at a feverish pace. Throughout Dr Chang’s segment of three pieces, starting with a well-paced Bach-Siloti ‘Air on the G string’, nobody dared interrupt him with applause, for his infectious enjoyment at the piano was too evident. Creating a hypnotic spell that gave body to the syncopations of Mayerl and Gershwin, Dr Chang sent palpable musical waves around the room, weaving between the Beethoven busts and other musical paraphernalia on display in the Gallery.

The only formally-trained musical performer of the afternoon, Brandon Voo, is a graduate of the Yong Siew Toh Conservatory of Music and plays the cello professionally; his musical chops were definitely on display in the Rachmaninoff. Accompanying him was Dr Lin who was no slouch in the accompaniment and provided the steady tempo that tamed the wildly passionate cello line. (I observed that Dr Lin played with the lid in the lower position in both his roles as soloist and accompanist, a further testament to his professional-level musical sensitivity). One could only wish that the duos had rehearsed at the Steinway studio much earlier, so they could get the sounds of the two instruments to gel more tightly.

The evening rounded up with two piano pieces that would not be out of place on a professional pianist’s recital programme. Chopin’s Barcarolle started off with aplomb, and a Venetian gondola soon followed on gently lapping waves. I would have preferred a slightly fuller pedaling: Dr Au no doubt uses the pedal sparingly so as not to allow notes to bleed into the next and cause phrases to become indistinct. However, with drier pedalling, the gondolier seemed to be pushing on a slightly arid canal. Greater attention to the overall melodic structure would have made this performance unforgettable. All in all, Dr Au won full marks for effort, and he played the Granados spectacularly, not once stumbling in the mire of a showpiece that taxes even the most expert of virtuosos. He obliged the cheering audience with the Schumann-Liszt ‘Widmung’, a popular encore with many concert pianists past and present, and he is definitely capable of joining their ranks if he had so wished to, years ago.

Minor hiccups were inevitable seeing that the doctors all have busy schedules and can only practise infrequently, from Dr Au’s running through once a day to Dr Chang’s whenever possible at the piano shop downstairs from his clinic! To their credit, there were hardly any stumbles in the pieces, even as Dr Au presented the two most difficult pieces from memory. The performers more than made up for all these with heart and an enthusiastic desire to share their music with the audience. In the end, it was not the technicality of the pieces that really mattered, or even whether the performers measured up; the afternoon soiree was spent enjoying the musicians’ company and bonding through the kinship of musical fraternity. As Dr Chang wryly announced at the start, “Thank you for joining us for some MCs — not medical certificates, mind you, but Music and Culture!”