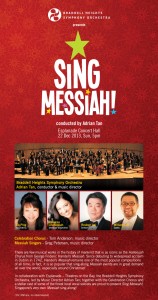 Adrian Tan, Music Director of Singapore’s only community-based orchestra since 2012 is to be applauded for taking on with exemplery verve the inauguration of a sing-along Messiah in Singapore. A public call for the rehearsed stage chorus had to be coordinated alongside ad-hoc sessions to run through the music for the singing audience with Greg Petersen and Tom Anderson, directors of local amateur choruses. Four eminent young local soloists were chosen, and the Braddell Heights Symphony Orchestra supported the abridged performance of the Prout/Mozart edition of Handel’s Messiah.

Mr Tan’s rousing introduction, including explicit instructions for standing during the Hallelujah chorus were well received by the audience. Unfortunately, venue arrangements did not live up to expectations: though tickets were differentiated into singing and non-singing on purchase, at the door, seating was not segregated, rendering the sing-along experience less communal for those surrounded by non-singers. House lights remained down for over a third of the concert, such that following scores was impossible unless one had a personal source of illumination.

The performance itself was full of energy from the generally young instrumentalists and choir. Tempos tended to the upbeat, with a little incoordination between soloists and orchestra. The scratch chorus though was to be commended for a thoroughly heartfelt rendition of the arpeggiated runs and suspensions of this baroque masterpiece. As is often the case in amateur choirs, the lower voices suffered from scarcity compared to the upper voices who had a solidly coherent sound. London-based Ee-Ping filled the hall with her ringing soprano timbre. The Concert Hall is not the kindest to vocalists, and the orchestra — which is acoustically favoured in any case — was often over-enthusiastic in the arias. However, Reuben Lai’s focussed tenor, William Lim’s mellow bass and Rebeccah Chellappah’s warm mezzo voices gave much pleasure. Audience enthusiasm was palpable, and culminated in general participation in the encore of a Christmas medley.

This oratorio, originally written for Easter but now commonly performed around Christmas, has been a perennial favourite for over 250 years. The music allows for great variation in performance practice, from chamber scaled versions, recently by the Dunedin Consort and Stephen Layton’s Polyphony, to behemoths such as Sir Thomas Beecham’s mid century recordings. Well over 200 albums exist of the various versions of this work, with its complex editorial and performance history, But perhaps as Adrian Tan would encourage, singing it for yourself may be the best way to really appreciate this pinnacle of baroque art.