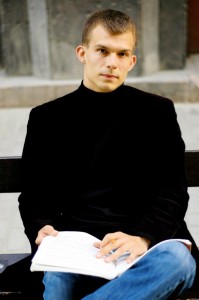 “Competitions are for horses, not artists.” — Béla Bartók

How fitting, then, that Hungary pianist Adam György, who attended the Bela Bartok Conservatory of Budapest before entering the Franz Liszt Academy of Music, subscribes to the same philosophy. György has won a smattering of piano competitions in Hungary in his youth, the most promising being at the first International Chopin Competition in Budapest (2004) where he won all three top awards: the First Prize, the Grand Prize, and the Special Prize. He was inducted into the Steinway Artists lineup in 2005, and made his Carnegie Hall debut in 2006. He has variously been lauded as a prodigy and a Liszt specialist, with some going so far as to call him the “Liszt ambassador of Hungary”. However, a cursory check on the internet failed to reveal any further top prizes at international major competitions.

In a field where credentials hinge on the quantity and standing of competition wins, critics may balk at this apparent lack of “career advancement” on the competition-soloist circuit. György is not at all fazed by this. He agrees that “competitions are good for goals… students need competitions and concerts and exams to prepare and to get better and better… and competitions always inspire students to get the best out of themselves, and are good for making people take notice of you”. But, “after a time, you have to forget about competitions… because art is not about competitions. Art is about performing, and giving, and building connections between people” (Skype interview with music blogger “Piano Addict” Gail Fischler, 2012).

His unconventional, yet uncannily logical philosophy may be traced back to the oft-repeated story of how, in his childhood, he used to draw everything upside-down. His father soon realised that instead of being a learning impediment, it was simply Adam’s way of showing what he was drawing to the audience, who would see it right-side up. This strong narrative and communicative instinct has been at the core of all Adam’s work, be it in performance, pedagogy, or philanthropy. To these ends, György has perhaps surpassed expectations of a 30-year-old piano virtuoso. Instead of exhausting himself on the competition-recital circuit, he has turned to the younger generation — “children are our future”. Recognising that talent can be found everywhere, but are largely untapped since only a privileged few will win competitions and get the opportunity to learn from world-class tutors, he has been tirelessly giving masterclasses and providing inspiration to young pianists around the world since 2006, most prominently in America and Southeast Asia. But one person giving masterclasses to a few kids at a time is not enough. In 2009, with some faculty from the Liszt Academy — his old and present mentors — he started the Adam György Castle Academy in his hometown of Pomaz in Hungary.

An annual ten-day summer camp for aspiring pianists that literally takes place in a castle (right), it features daily masterclasses with the professors as well as from Adam György himself. The driving force behind his efforts is a strong desire to reciprocate the help and opportunities he had been given. In his early twenties, when he first arrived in North America, he was broke, “didn’t earn anything, and went from one friend to another sleeping on sofas” (interview with I.S magazine, 2013). While the rest is history, he thought of how he received so much from his teachers, professors, sponsors and friends over the years, and wanted to give back and support these talents from around the world. The motto for the Academy is “Inspiration, Music and Technique”.

Aside from the rigours of musical training, the camp offers many opportunities for the young talents of different countries and cultures to network and interact with one another, and to enjoy some Hungarian sights and culture on evening and weekend trips out to the town, dinners, and even a cruise on the Danube River. Indeed, the Academy has students that return year after year to reunite like old friends. “This approach helps to develop our students’ musicianship and encourages them to develop,” notes György, “so that they can be not only a better musician but also a better person, and to practise this in their lives every day.”

All work and no play makes Jack a dull boy, György believes. “Balance is the most important… to achieve complete dedication in something in your life, you also need to be balanced… and doing other things as well,” which for him translates to running, race-biking and mountain biking, playing soccer and sports. “It helps to keep me grounded and balanced,” he says in an interview with Imagine TV Network.

He has taken a step back from the stress and anxiety surrounding competitions and recital-circuits that have defined many soloists’ lives.
Van Cliburn, for example, famously won the first International Tchaikovsky Competition in 1958 and was called “more Russian than the Russians”, yet he felt drained enough to retire from public performance in 1978, at only 44 years of age. It is no secret that many top pianists, while being inspiringly larger-than-life on stage, are really ill-prepared mentally and emotionally for a competition-and-concert career on the road.

To this end, György’s Academy includes classes on preparation for performance and handling stage fright; by starting up this Academy, he has established an inclusive environment where there are only winners. Everyone gets to perform, everyone learns at his or her own pace, and the emphasis is on doing something that one is passionate about and enjoys doing, rather than being forced to. To be sure, at this time Adam György is no Liszt, Horowitz, or even Cziffra; but his career is so much more than being just a virtuoso, taking the road less traveled, so to speak — out of the limelight and glamour of the stage. With a holistic vision for artistic and personal development for his students, György’s Academy would likely serve young pianists better in music and in life, than a whirlwind decade of competitions.