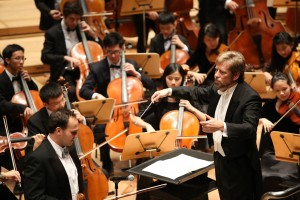 It is not often that one sees the viola take the spotlight, and rarer still to see this much-maligned instrument capture the imagination of so many young musicians. But thanks to the generous sponsorship of LANXESS, violist Max Mandel was able to do that and much more in tonight’s concert with the Singapore National Youth Orchestra (SNYO) under the baton of acclaimed conductor David Commanday. LANXESS, a leading specialty chemicals company, has been supporting the development of talented students from the SNYO through mentorship opportunities with world-renowned musicians since 2010.

Tonight’s performances had all the trappings of a youth orchestra’s: undue haste, obsessive attention to their scores and less-than-polished playing but equally a free-spirited exuberance that was thoroughly endearing. These were themes established early on in Weber’s Overture to Oberon, which was as much a prelude to the evening’s programme as an introduction to the musicians.

While this energetic account suitably set Weber’s magical elfin world alight, Stamitz’s Viola Concerto needed a different spell. Classical grace and elegance frequently eluded the orchestra, which did little to aid Mandel’s period performance approach. For the most part, it was an unequal partnership met at every corner by Mandel’s artfulness and graciousness. Whether or not his young charges were assuming their appropriate role, he was able to make his part sound at once like a principal melodic line and at other times like distinctly accompaniment material so that the work’s structure was never obscured.

The third movement was the best coordinated, owing as much to the chemistry between Commanday and Mandel as to the heightened responsiveness of the orchestra, which had by now settled more comfortably into its playing. Here, Mandel’s superlative understanding of historically-informed practice was fully realised in a range of expressive techniques that resulted in a gentler hue and greater breadth to his tone. His light, articulate bow strokes afforded a valuable excursion in the composer’s sound world, even if the hall’s acoustics did not completely favour it.

Drawn to the Brahmsian ideal of locating the meaning of the Romantic within the Classical form, Commanday gave an account of the First Symphony that utterly underscored the composer’s formal mastery. The direction of the music was always assured, with every turn of phrase attended to with the utmost care and every idea captured instantaneously by an orchestra that was entirely pliant to his sculpting. It was the same alacrity that buoyed the work to its finale, marred only by sloppy ensemble in the third movement and an underwhelming entry into the fourth. These however were eclipsed by many moments of fine solo playing. The winds merit special mention, as does concertmaster Kow Xiu Yi, who coaxed a most beguiling tone from her instrument in the second movement, complementing the atmosphere created by the solo horn perfectly.

What remained a good deal longer in the atmosphere however was an unalloyed conviviality. The disciplines of the art form were always held down in the gentlest and most constructive manner, while the fun bits were allowed to fly. The encore of Rouse’s Orange Blossom Special was a fine example of the latter, leaving many an audience member with a spring in their step, as though they had been let in on the secret to this remarkable music-making.