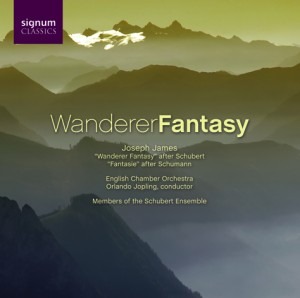 It’s fascinating listening to transcriptions because they not only reflect the composers thoughts through that of the transcriber, but also teach us a little bit about what we think of the work – they reflect our view of the work itself. Usually transcriptions are from larger-scale works to smaller – typically from orchestra to piano, for example, Beethoven’s symphonies for piano transcription by Liszt, or any number of his other transcriptions. If tastefully done, they can be both instructive and enjoyable.

This disc of transcriptions includes two by Schubert and Schumann – both their famous ‘fantasies’. Familiarity can sometimes be a hindrance to enjoying a transcription and it proves to be the case here. Liszt himself did a transcription of Schubert’s Wanderer Fantasy but so expanded it (in his typical style) for large orchestra and piano that it tells you more about Liszt than about Schubert. Joseph James’ version (in fact, ‘Joseph James’ is not one person, but two – Stanley Joseph Seeger and Francis James Brown)  is less ambitious and tries to follow the originals, as far as I can tell. 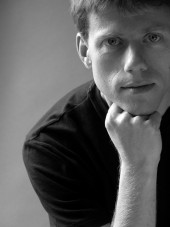 The transcriptions are written for a choir of solo strings for the more intimate and difficult parts and string orchestra. Members of the Schubert Ensemble – Simon Blendis (violin), Douglas Patterson (viola), Jane Salmon (cello), Peter Buckoke and Stephen Williams (double basses) perform these concertante parts in this recording, backed by what sounds like the English Chamber Orchestra and 38-year old cellist and conductor Orlando Jopling, and they play splendidly.

It’s transcriptions themselves which I have problems with, as you might have guessed. The insistent repeated note motive so organically built up by Schubert in his Wanderer Fantasy is softened here, with the percussive quality of the piano completely transformed. Strings tend to sound slower and play everything with more legato than on the piano (though it could be argued that anything sounds less legato on the piano), but it takes away from the bite of the music. The soloists get frankly virtuosic lines, especially with Schubert’s Klaviertieger arpeggios that one imagines Franz Liszt would have revelled in and play wonderfully, with beautiful tone, but compare the sound of a single piano versus even that of a string ‘quartet’ and the single piano automatically sounds more intimate in Schubert’s many conspiratorial, almost confession like statements which I love the work for. Try the entrance of the ‘Wanderer’ theme itself for an illustration of this – the loneliness of Schubert’s original Wanderer is not to be found. Additionally, all the colour seems to be in the string ensemble and the orchestra itself gets a lot less of it. It all makes you realize how idiomatic Schubert’s piano writing really was.

The Schumann has even more transcription issues because of the more tightly wed nature of Schumann’s writing to the piano. It has long been a favourite of pianists due to its potential for orchestra-like sounds or simply put, colour, even when played on the piano, but in this orchestral transcription (the first that I know of), it just doesn’t translate. The opening, soaring statement of the first movement sounds syrupy. The opening of the second movement sounds generically ‘orchestral’ – difficult to explain but you’ll understand when you listen to it. Again, Schumann’s if anything more confessional asides are lost here as the orchestral version just misses that ‘inner’ quality. In addition, the composer(s) miscalculate and write certain parts of the work as larger than they are. Try 4:42 on the third movement for example – where the full orchestra is deployed instead of being brought in gradually. Also, there’s the rather unfortunate result that slow, arpeggios accompanying a melody often sound like Bellini!

An interesting release, certainly, that will challenge the way you think of the two works, and perhaps even help you appreciate them more.