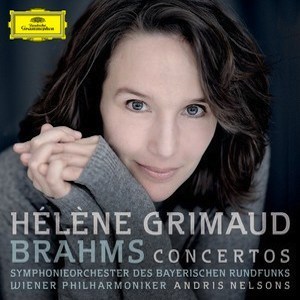 The two Brahms piano concertos are rightly regarded as pinnacles of the repertoire, both musically and expressively. They pose unique challenges to the pianist and conductor alike and some pianists, for example, Sviatoslav Richter, chose to play one concerto and not the other. These collaborations between Hélène Grimaud and Andris Nelsons join hallowed company with many distinguished recordings before them, considering just the pianists who have recorded both, Leon Fleisher and Rudolf Serkin with Georg Szell are highly regarded performances.

Grimaud’s unabashedly Romantic and leisurely performance of the first concerto makes it feel like an old-man’s Brahms – which doesn’t necessarily have to be the case, since it is in fact one of his earlier works. Her restrained and even-handed avoidance of virtuosic shows made me yearn for the fine temperament that she has displayed elsewhere. Nelson’s languid, big-band type handling of the orchestral score, with soft-edged attacks made it feel further bloated, and the tendancy of both to slow down more and more in the lyrical parts means that the momentum of the movement suffered, as did tension between the piano and orchestra, so essential in this music.  I prefer the nimble Fleisher with the fiery Georg Szell on the podium. She plays musically, and with much warmth in the second movement Adagio, but the last movement finds the two in fairly leisurely form again. Best if you prefer your Brahms sloooow and Romantic. The Bavarian Radio Symphony play excellently.

I’ve always preferred the second piano concerto to the first, and the general approach taken by the two in the earlier opus works a lot better here. The ever-plush Vienna Philharmonic play magnificently here and the performance has a natural ebb and flow, and the extra weight of the orchestra sounds much more suited to the music. Grimaud plays with great poetry here, and the performance is never overtly romantic and simply blooms. Pianist and orchestra negotiate the Scherzo nimbly, if still rather romantically and with a touch of wistfulness, the Adagio is gorgeous and turbulent and achingly yearning all in one, and the final Allegretto grazioso, played sympathetically with not a little touch of gypsy, sparkles placidly to the concerto’s conclusion. I love this performance of the second, and I wish I could say I did the same for the first concerto, but for me, old-man Brahms belongs to the later opuses.

Recommended for the second concerto.