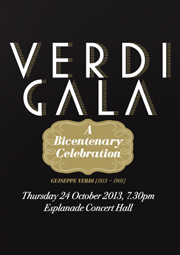 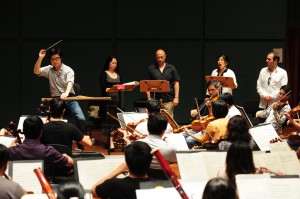 After a fantastic performance of the Overture to ‘La Forza del destino’ by the Singapore Lyric Opera (SLO) Orchestra, the affable conductor Darrell Ang announced the theme of the concert which was also the concert’s title: a celebration of Giuseppe Verdi’s bicentenary through a presentation of the favourite lollipops from his many operas. In his short but informative address, Ang highlighted Verdi’s role as a political figure and the father of modern Italian opera, and summarised the music of Verdi as ‘an amalgamation of different personalities’.

If Darrell Ang was indirectly boasting of the orchestra’s versatility, he had every right to do so. The SLO Orchestra is a small but elite group, well known for their solid performances in every SLO production, and despite lacking a desirable full-bodied sound at times, they compensated tonight with deeply sensitive performances of Verdi’s oeuvre. They evoked a wide spectrum of emotions in the Overtures (La Forza del destino and I Vespri Siciliani) and Ballet Music (Aida), in which the woodwinds stood out with their mesmerising, silvery sounds. The rich, youthful spirit of the all-female chorus in the Witches’ Chorus (Macbeth) and an exceptional Gypsy Chorus (La Traviata) were the icing on the cake.

The four soloists of the night were no less impressive. Singaporean mezzo-soprano Anna Koor took the stage first with Oh, dischiuso e il Firmamento (Nabucco). She started off nervously, perhaps as part of her portrayal of a Fenema coming to terms with her impending martyrdom, but all nervousness dissipated towards the end as she envisioned her soul’s ascension into heaven. In the second half, Koor’s Rataplan (La Forza del destino) showed off some great breath control, but the strength of her voice was not quite sufficient to lead the march-like sequence in the chorus and orchestra.

Taiwanese soprano Jessica Chen upped the game with a captivating rendition of Ecco l’orrido campo (Un Ballo in Maschera), displaying a combination of skilful voice control and meticulous attention to detail. In Pace, pace, mio Dio (La Forza del destino), her soulful rendition of Leonora’s aria was so convincing that it was as if Chen had suffered a similar grievance herself. Chen was more than a singer, but also an actor, and a talented one at that.

Celebrating Verdi’s international appeal and message, the SLO flew in two Australians, Christopher Hillier and Jason Wasley, both of whom were performing in Singapore for the first time. The charming Christopher Hillier grinned from ear to ear as he took his position on stage before the music started. A cheerful performance of the straightforward E gettata la mia sorte (Attila) was all it took for the audience to fall in love with his personality. Hillier had the weakest, but most expressive voice amongst the four soloists, and his performance of Di Provenza il mar (La Traviata) was easily my favourite of the night. A lyrical melody pairs with the somewhat bitter lyrics to tell the story of Germont’s rather poor attempt to console his son Alfredo, and Hillier was able to paint an accurate and dramatic characterisation of Germont, ingeniously bringing out a narcissistic bitterness in his voice.

Similarly, Jason Wasley was also a charismatic figure, although he established his stage presence in his voice rather than in his personality. Wasley had a rare magnetic singing voice, especially during the tenderest moments of Quando le sere al placido (Luisa Miller), but his vibrato during his loud and sustained notes were inconsistent in quality. Thankfully, he sounded much better after he was warmed up and became less forceful in tone for the rest of his performances.

Of course, the night would not be complete without a collaboration between all the soloists. The four came together for a lovely rendition of Bella figlia dell’amore (Rigoletto). Wasley as the Duke was an aggressive bully rather than a smooth-talking seducer. His advances on Koor’s Maddalena were met with impassioned outcries of grief from Chen’s Gilda, which though poignant, unfortunately obscured the contrasts between her own dismay and Koor’s coquettish rejections.

The most famous piece of the night, Libiamo ne’ lieti calici (Brindisi from La Traviata) was energetically delivered, and received a long standing ovation from the audience. As if it weren’t enough, they performed it once again as an encore, this time with Hillier gesturing for the audience to join in the singing, but what a pity that most in the audience weren’t familiar with the lyrics! Nevertheless everyone still clapped along enthusiastically, and Darrell Ang closed the concert in his usual stylistic fashion.

It was very unfortunate that neither translated lyrics nor surtitles were provided, not allowing the audience of non-native Italian speakers to adequately appreciate and understand what was being sung. That aside, the music and vocal quality ensured that it was still a night well spent!