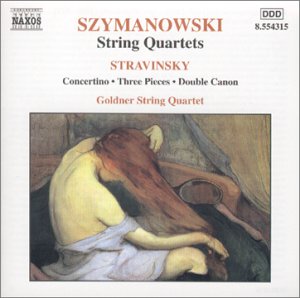 It may come as a surprise to many that the sixteen minutes of Stravinsky’s music on this disc is the sum total of his output for string quartet: just the three bite-sized miniatures, and without even a properly-titled essay called “String Quartet” in this genre to his name. Karol Szymanowski, on the other hand, still hovers on the fringes of prominence and most audiences, I suspect, wouldn’t know or even care that he does have two string quartets, along with a handful of violin-piano works and a lost piano trio in his quiver of chamber music.

Szymanowski is very typical of many 20th century composers in that he continually sought an individual musical identity which hitherto had been amalgamated from extant influences: the Germanic Classical and Romantic schools, the burgeoning French “impressionists”, the experimental styles of atonalism, microtonics and aleatorics (alongside the likes of Scriabin), as well as the turn-of-the-century nationalism which was erumpent in so much of Europe. 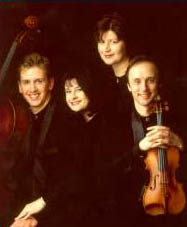 In this respect, his two string quartets were written ten years apart in 1917 and 1927, and bookend a number of significant works in-between them: the opera King Roger of 1924, a Piano Concerto (his only one), the poetic Stabat Mater and more than half of the 130 or so folk song settings of Polish origins. Szymanowski was not particularly prolific, but his miscegenetic origins gave rise to richly exotic themes and textures in his music, assimilating in his own inimitable way the styles from other composers: shades of Debussy and Ravel in his first String Quartet, and in the second Quartet, a  Mahlerian-flavoured Schezando and a Lento assai that looks forward to Bartok’s six quartets.                                               (above: the Goldner String Quartet)

These quartets have not been very well represented in the catalogue, either: the Varsovia Quartet on Olympia (OCD 328) and the Carmina Quartet on Denon (CO 79462) most readily come to mind – and, er, that’s about it. Now at least there’s also a Naxos alternative: the Goldner String Quartet (taking their name from Richard Goldner, the founder of Musica Viva Australia, the biggest modern-day presenter of chamber music concerts in Australia) may not (yet) be household names in the quartet circuit outside Australia, but they are nonetheless formidable exponents of the repertoire. At the Adelaide Festival 2000, they presented a ten-concert survey of 20th century quartets (each concert devoted to a decade, from the 1900’s to the 1990’s), and more recently in September 2004, they gave the complete Beethoven string quartets – the summit of the genre – over three weeks at the Verbruggen Hall of the Sydney Conservatory. 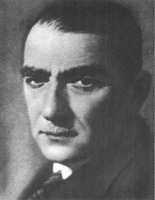 They dispatch the first String Quartet with rolled-up sleeves and top buttons undone, full of steely, sinewy ideas, giving a masterly argument of Szymanowski’s earnest, and sometimes sombre, writing, reaching a jubilant, springing characterisation of the final movement which is full of verve and brings to mind shades of Milhaud. There is some profound insights to be had here as they paint with a broad emotional palette and on a sonic canvas writ large, the original sound-world of Szymanowski (left), bringing to mind the mesmeric character of the First Violin Concerto which the composer had just completed the year before.

The second Quartet gets an even more expressive outing: a highly refined “impressions” of the Impressionists Debussy and Ravel, but with heavier chirascuro and darker shadows, relentless ostinatos and an otherworldly nostalgia. Szymanowski’s brittle writing often places the line above the stave, which leaves musicians exposed on a high-wire, but the Goldner players transcend these technical difficulties with scarcely a hint of difficulty. The Tatric influence in the closing Lento of the second Quartet is highlighted with plenty of detail and nuance, and the Goldners make some magic with this “lost world” of Szymanowski’s.

The Goldners performed the first Szymanowski Quartet at Adelaide 2000 in the “1910’s” program, along with Stravinsky’s Three Pieces for string quartet. Obviously Stravinsky was never much amiable to this genre – just sixteen minutes of music in all! – but here they make ideal fillers against the Szymanowskis to bring this disc to the lower end of respectability in terms of playing time. As in the preceding works, the Goldner String Quartet negotiate the cryptic, not to say sparse, sensibilities of Stravinsky with exquisitely-wrought performances. A very rewarding album which will repay repeated listenings, and we should hope to see more of the Goldners on disc in future – the Janacek or Nielsen string quartets, perhaps?