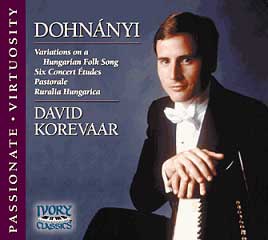 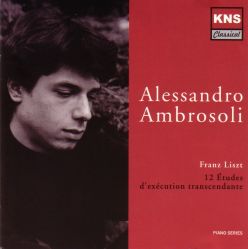 Two Hungarian composers, two virtuoso pianists, and yet two different fates. One is justly celebrated, one is unjustly neglected. Such is the cruel judgment of posterity that Franz Liszt (1811-1886) despite his apparent vulgarity is one of the most performed and recorded of pianist-composers while Erno Dohnanyi (1877-1960) despite his craftsmanship is all but ignored by concert pianists and recording labels. The difference is this: while Liszt was an innovator, Dohnnyi was an imitator. Theres little doubt as to who was the guru, and who was the acolyte.

This may sound harsh but one just needs to hear Liszts Transcendental tudes alongside Dohnnyis Concert tudes. Liszt (right) took two or three revisions, over decades, to craft his originally rudimentary studies into the definitive tudes as we know them, the end product being undoubted gems. One admires them as tones poems; the transcendental virtuosity merely a means to an end. Dohnnyis tudes sound like very clever finger studies for which the mastery of virtuosity is the primary aim. Some may balk at this comparison as being unfair, one between apples and oranges. But now lay the Dohnnyi beside Liszts shorter sets of Concert tudes, the ones that include La leggierezza and Un sospiro or Waldesrauschen and Gnomenreigen. Game, set and match to Liszt, again.

Having said that, there is much to savour in David Korevaars selection of Dohnnyi, which is varied and an excellent introduction to the composer. Chances are most listeners are limited to Dohnnyis witty and well-crafted Variations on a Nursery Tune for piano and orchestra; this CD goes a few steps further by revealing Dohnnyis Hungarian-ness. Theres no denial that his is a more cosmopolitan view to indigenous Hungarian music compared with Bartok or Kodalys bare-bone and much less ornamental approach. Dohnnyis music sounds like its dressed up for a more international audience who might find the original too stark or parochial for their palates goulash served up for New Yorkers rather than natives from Budapest, if you will.

Ruralia Hungarica is Dohnnyis (left) response to the accusation that he wasnt Hungarian enough. This seven-movement suite uses authentic Hungarian folk music and its movements are concert showpieces ( la Brahms and Liszt) rather than note for note transcriptions. There is enough melancholy (with the ubiquitous imitations of the cimbalom) alternating with swashbuckling exuberance to sustain interest. I cannot help raise a smile listening to the pentatonic fantasy that is the second piece (Presto, ma non tanto). It uses no less than four folksongs and sounds as if it could have been written by a Chinese composer! Ruralia Hungarica exists in versions of certain movements for violin (or cello) and piano, as well as for full orchestra, suggesting that maximum mileage was to be had on these charming and innocuous pieces.

In the Variations on a Hungarian Folk Song, Dohnnyi out-Brahmses Brahms. The chorale-like theme is somewhat unmemorable but the ten ensuing variations bring out a wide range of colours and nuances. Just topping 11 minutes, it hardly outstays its welcome. Then come the contentious tudes all flash and spark but little actual warmth. The coruscating tude No.6 in F minor (also referred to as Capriccio) has acquired a life of its own, having been recorded by Horowitz (on RCA Victor) and Stephen Hough in his scintillating The Piano Album (on Virgin Classics). Korevaars reading matches the best of them. In the delightful but trivial Pastorale (Hungarian Christmas Song), Dohnnyis charisma and pianism wins me over in a way that Liszts Weihnachtsbaum (Christmas Tree) suites have never done so.

David Korevaar (right), an American in his early forties must be commended for his enterprise. His playing is rock solid, virtuosic in the service of the composer (anything less will never do) and full of character. I remember a Chesky recording of Korevaars teacher Earl Wild playing the piano music of Nikolai Medtner, from a time before Medtner piano discs became fashionable. I dare say that Korevaar does for Dohnnyi what Wilds disc did for Medtner, and can only hope for a rediscovery and reappraisal of Dohnnyis art of pianism.

There are many excellent recordings of Liszts Transcendental tudes, notably by Lazar Berman (on Melodiya), Georges Cziffra and Vladimir Ovchinikov (both EMI Classics) and Freddy Kempf (BIS), all of which marry poetry, drama and virtuosity to a degree that makes the listener forget they are studies. Young Italian pianist Alessandro Ambrosoli (born 1969), the latest to join the queue, is thankfully is not cowed by the technical and interpretive challenges.

Listening to all 12 tudes at a stretch can be a test of, and despite Liszts ability to vary and moods and colours in each number, caution would still be advised. In Ambrosolis set, there is a sense of the tudes being performed in a single sweep, as if in a live recital. There is no let up in the level of spontaneity, and no tude sounds as if it is played cold. The variation in mood and ambience brought about by each number is also distinctly palpable. Ambrosoli takes 62 minutes to complete the entire set (the revered Lisztian Jorge Bolet clocked in at something like 75 minutes) and does not come across as over-rushed.

Dipping into the sine qua non numbers, there is much to marvel. There is sufficient drive to make both Mazeppa and Wild Jagd gripping rides on horseback (although both are differently inspired), and the gossamer pianissimo flickerings in Feux follets are something magical to behold. For the ability to spin a yarn with imagination and fantasy, Ambrosolis takes on Ricordanza and Harmonies du soir do not want for much. All these easily make one forgive and forget the minor slips in Vision andEroica, all no doubt committed and captured in the heat of the moment. But what moments!

Interestingly, there is a photograph of Ambrosoli with his teacher Lazar Berman in the booklet and a ringing endorsement by the master-barnstormer himself. There is every reason why both teacher and student can be proud of this achievement.

This is a second piano disc on KNS Classical that I have reviewed that could have done with some editing, especially of fluffs that will come back and haunt the alert listener. When one begins to expect the clinker while listening to this disc or another with the same repertoire, it becomes a real problem. Perhaps the label might wish to rethink its no-editing policy (if there is one). Sometimes, technical accuracy can be achieved without sacrificing spontaneity or the sense of being there yourself.