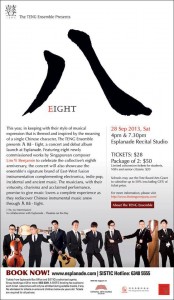 The all-Singaporean Teng Ensemble, now in their eighth year, also has eight members, conveniently giving their concert its title. All its members are music teachers and they have just recorded their first album. They include a countertenor and performers on the yangqin, pipa, sheng, guzheng, cello, erhu and guitar.

As composer-in-residence Benjamin Lim Yi took pains to explain repeatedly throughout the concert, this was not a classical Chinese music concert – the ensemble decided early on in their existence that they did not want to pigeon-hole themselves in their repertoire, opting instead to bring as large an audience to Chinese music as possible.

In an effort to portray an image different from that usually associated with classical Chinese musicians, the ensemble has carved itself a niche in Singapore’s often bland music scene, and their chosen uniform – a snazzy black suit, skinny tie ensemble speaks to such aspirations. Yet I wonder if, in this concert at least, there was a surfeit of style over musical interest.

A sea of white chrysanthemums took centre-stage, forming an attractive foreground between the audience and the musicians, and also a canvas on which mood lighting – very well executed, by the way – was projected. Eight new pieces/arrangements by Benjamin Lim Yi (www.limyi.com) were given their first performance.

Despite his varied experience in film scoring, with at least five film scores to his name, including the complex score (from the excerpts on his website anyway) to Loo Zihan’s controversial ‘Threshold’, these pieces seemed often cut from the same cloth, with atmospheric, dreamy mood music (Contemplate) interspersed with pentatonic melodies on electronica. Many of the tunes had a pre-recorded synthesized track – the purely acoustic arrangement of 关山月 (The Moon at Mt Guan – lovely, but too short an excerpt) was an exception, ‘Un die in Settembre’ was another.

Lim’s ability to create complex musical scores was not much in evidence here, many pieces were quite easy to listen to but not the most memorable, with what might best be described as chinoiserie with a bass-line, what might result if Kitaro (those drum beats in Forest Trail, mainly) got together with Yanni and Joe Hisaishi to write the soundtrack to a Chinese film score. I know that it isn’t meant to be classical music, but these musicians are all classically trained, and I’ve seen some of them perform quite successfully individually, so a certain amount of sophistication and musical interest in the material was to be expected – a good composer knows his resources and uses them well. The most successful pieces were the mellow ‘Un Die in Settembre’, inspired by Hisaishi. and ‘Valse’, which Lim explained was influenced by their common love of Korean drama.

Compositionally, there were, I feel, some wasted opportunities here. The music hardly stretched the musicians’ technical abilities, with each instrument used somewhat stereotypically in their capacity to create sounds – the guzheng was fairly characterless, mainly used for its glissando effects and the superb countertenor Phua Ee Kia was reduced, criminally, to vocalizing, in the main, except in <子夜歌> Zi ye ge, where he sang the verses to Li Bai’s poem. Samuel Wong, capable of some serious fireworks on his pipa, seemed somewhat muted here, his contributions bland and uninteresting through little fault of his own.

All said, it was a divergence from the run-of-the-mill concerts and a pleasant diversion on a sleepy Saturday afternoon. I hope that the composer will be able to find a balance between the musically accessible and stimulating in the next installment.