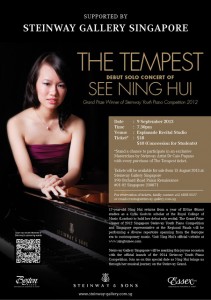 See Ning Hui is only 17, and she already has a long list of achievements, notably her being awarded the Grand Prize Winner of Steinway Youth Piano Competition and representing Singapore at the inaugural Southeast-Asian Steinway Regional Finals last year. It’s always exciting to watch a debut recital, especially from one with competitive experience, as you’d expect a daring showcase of his or her best abilities. Ning Hui opted for a conservative but lovely program, and it was meticulously planned in a way to show off systematically the different aspects of her musicianship (though I can’t refute the possibility that she had simply arranged them alphabetically by composer).

The first half of the night was a demonstration of Ning Hui’s individualism and maturity as a performer. Rather than sticking to strictly a mechanical approach or a liberal one for Bach’s ‘Prelude and Fugue No. 9 in E’, she opted for a well-balanced middle ground. Like Gianluca Luisi, Ning Hui had a great ability to dissect the sophisticated layers and communicate to the audience in a way that is uncomplicated and friendly for the ears. Ning Hui’s use of the pedal, however, was uncomfortably loose, and there were many times in the Fugue when the momentum of the music was held back by the echoes of previous chords.

Ning Hui made a lasting first impression with a heart-stirring arpeggio in the opening bars of Beethoven’s Tempest Sonata, and it is promptly followed by a thrilling adventure with a mischievous mix of wonderment and indignation. I was particularly irritated by Ning Hui adjusting her seat between movements. Perhaps it was an intentional break to reboot the audience’s mind for the next movement, but it didn’t justify the first pause. There is a certain thematic progression from the first movement to the opening bars of the second, and if I were less familiar with the music I would have overlooked the lack of continuity as misinterpreted the second movement as a reprise of the first movement in a different environment. Thankfully, the Allegretto rounded up the piece perfectly with her luscious melodies and technical brilliance in bringing out a perfect tonal balance in both hands. 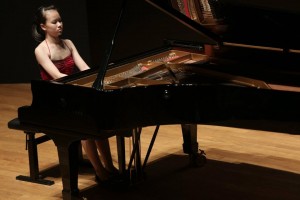 After the intermission, Ning Hui was ready to display her virtuosity, starting with a couple of Chopin’s Études. The two Études she chose were related in a fascinating way; ‘Sunshine’ (Op.10 No.8) contains a non-stop virtuosic passage in the right hand while the melody is on the left, and the ‘Revolutionary’ (Op. 10 No. 12) is vice versa. Unlike popular interpretations, Ning Hui chose to prioritise the melodies over the difficult passages, keeping them to a light flutter and only bringing them out to bolster the dramatic moments, and she was able to capitalise on the sensitivity of the piano to produce a truly refreshing sound. The next showpiece, ‘La Chapelle de Guillaume Tell’, is a fine example of Liszt’s mastery in fusing lyricism and high technical demands. Though not the most challenging piece of the Switzerland suite, it is a powerful work that tests the endurance of the pianist, starting from a tiring passage of tremolo chords before launching into climatic octaves in rapid rinforzandi. Ning Hui’s technique was unfortunately not yet a second nature and she struggled to maintain focus on the musical construct during the most intense moments, but nevertheless it was a rendition of rare quality.

The most entertaining work of the night was definitely John Mayer’s ‘Calcutta-Nagar’, a collection of 18 short pieces with a wide spectrum of mood. My favourite moment was Ning Hui’s performance of ‘Hooghley Nadi’: She was completely immersed into the music as she pounded on the keys with such a fiery that is reminiscence of a youthful Martha Argerich. The recital was completed with one of Mendelssohn’s most famous piano work, the Rondo Capriccioso. Ning Hui’s playing was filled with so much warmth that it is difficult to imagine that the piece was in fact rather challenging, and it was due to her unwillingness to show off unnecessarily and ability to be inconspicuous about her virtuosity that made this rendition one of the best I’ve ever heard.

The only fly in the ointment was Ning Hui’s tendancy to not give each phrase its due and to rush from one phrase to another, which unfortunately detracted from my enjoyment of the music. Still, this was an impressive recital and a promising return for the young pianist.

If you like reading The Flying Inkpot, why not add us on https://www.facebook.com/flyinginkpotclassical for updates on all things classical music in Singapore?