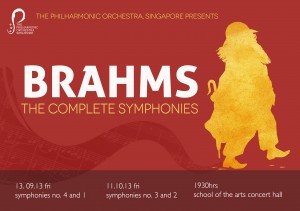 The Philharmonic Orchestra, Singapore (TPO) loves to perform symphonic cycles. It started with the ambitious goal of performing the complete Beethoven symphonies in 2003, and since then they have covered the works of other masters such as Schumann, Schubert and Sibelius. Ten years on, they are finally performing the symphonies of Brahms, whom was considered by many to be the successor of Beethoven. With only four symphonies to cover in two concerts, one would have expected them to perform the more popular First and Fourth symphonies separately, but strangely enough, TPO chose to cover both of them together, leaving the less popular Second and Third symphonies for the second performance next month. While it guarantees an interesting first concert, I can’t help but feel slightly worried for the turnout of the second night.

The famous critic Eduard Hanslick proclaimed, “My particular favourite is the Third, but I do not want to exclude the possibility that my opinion may change when I have become equally familiar with this latest work (the Fourth). Neither its treasure of ideas nor its chaste beauty is apparent at a first glance.” Despite its complexity, the Fourth is perhaps the most popular of the Brahms Symphonies. The first movement starts off with an exposition that evolves rapidly and organically on a self-developing melody, and TPO set the tone magnificently from the first notes. Despite its straightforwardness, there were no compromises on the nuances – underneath the lively tune from the violins was an expertly executed layer of developments. The cellos and horns brought forth the melody breathtakingly while the orchestra built up the tension transparently and unhurriedly during the transition into the secondary themes. In terms of orchestral arrangement, the practice of lining up the basses at the back showed off the section and was arresting, but on the other end of the spectrum the timpani were positioned a little too far from the orchestra, producing a detached sound that is rather uncomfortable to the ears. 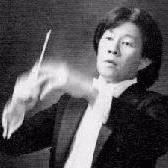 The second movement is my favourite movement of the symphony, and TPO nailed it. The horn blew me away with a commanding, yet delicate entry, as the string pizzicati set the pace with superb confidence. Lim Yau (right) is evidently a veteran on the podium, giving clear gestures and commanding an air of stability and patience at all times. The tempo was slightly faster than the usual walking pace, but it worked well with the luscious clarinets to invoke a serenity that left me yearning for more as the last pizzicato notes faded away. A side note: I was mildly irritated by the amount of noise generated from the clumsiness of the musicians; the movement would have been perfect had they mastered the art of turning the pages of their music scores silently.

The mood transitioned swiftly into the lively one in the third movement. Despite a marvellous rendition, the music was unfortunately marred by the triangle that produced a sound far too unfocused and bright. The trills were almost unbearably prominent; they could have perhaps used a thinner or softer beater, or simply mute the triangle more frequently to prevent the sound from lingering unnecessarily and bleeding into the sound of the other sections.

The last movement is designed to provide an energetic finish to the symphony, but in terms of execution, this was by far the most disappointing. Plagued with intonation and rhythmic imperfections, the orchestra struggled hard to maintain the structural integrity throughout the piece. The violins failed to present a balanced sound – the second violins, in particular, were underwhelming in volume as compared to their first violin peers. The antiphonal seating arrangement, made their weakness only more apparent. The usually arresting coda was, unfortunately, forgettable.

Perhaps the Fourth Symphony was a little draining for the orchestra. Despite a rather long intermission to catch a breather, the First Symphony felt strained. The first movement was played in a manner that was conventional and uninteresting, and the musicians were unable to muster the energy they did for the Fourth Symphony. The second movement’s blandness was only made more palatable by the deeply moving solo passages from the concertmaster Chan Yoong Han. Thankfully, the third movement, led by a splendid introduction from the clarinets, was a refreshing change that laid foundation to a contagiously spirited atmosphere in preparation for the last movement. Here, the strings almost ruined the mood with their careless scales in the Adagio, but the movement was saved by a mesmerising solo from the horn, playing a tune that Brahms heard from a shepherd in Switzerland. Towards the end, the tribute to Beethoven captured the attention of the audience once again, and the musicians gave their all for the grand finale, closing the concert with an epic grandeur.

The exceptionally strong winds and brass were undoubtedly the centre of attention of the night, and special mention goes to the soloists from the flutes, oboes, clarinets and horns for their unforgettable performance. Every solo passage was played with a finesse that’s common only amongst professional orchestras. I’m looking forward to hear more from them in their next concert, especially in the Third Symphony that features them prominently.