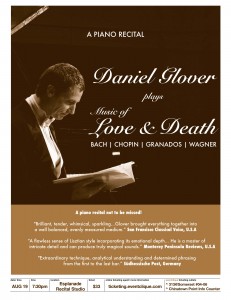 Wagner/Tausig           Ride of the Valkyries from Die Walküre

Any piano professor or student will tell you that piano technique has reached unbelievable heights in the last decade. Young virtuosos are not uncommon, and technical perfection is almost a given in concert pianists these days. Some mourn the ‘golden age’ of piano playing in the first decades of the twentieth century, when musicality and personality were given priority over note-perfect playing, but for better or for worse, that is a bygone era. That Daniel Glover’s performance did not reach the current age’s lofty standards could have been overlooked had he presented outstanding musical ideas. Unfortunately, this was not the case.

Starting a recital entitled ‘Music of Love and Death’ with Busoni’s transcription of Bach’s great Chaconne from the second partita was an unsuccessful choice. Bach’s Chaconne, as the programme notes observed, spans the gamut of human emotion in 32 variations on a repeating eight bar harmonic pattern. Busoni, naturally, fleshed out the texture for the piano quite artfully, but Glover did not guide his listeners through this thicker texture. His tendency to over-pedal hindered his attempts to voice the violin’s original line, and issues of timing made it difficult to understand the beginning and end of each variation. Glover would have done better to start directly with the Chopin Berceuse that followed, probably the best-performed piece of the night. The harp-like sound that Glover produced particularly in the upper registers was beautiful, but would have been complemented by a better sense of melodic direction. Nevertheless, it was well done, with a simplicity and artfulness that was missing from other works that night.

Glover did not seem nearly as comfortable in the B-flat minor sonata. The driving, gasping opening was again muddled by over-pedaling, and Glover’s discomfort was apparent in the leaping octaves of the opening of the Scherzo. The third movement is a funeral march, marked by the dotted rhythms that would have evoked for the 19th century listener the beating of a drum in a funeral procession. However, these rhythms were not well-articulated, and lacked the steadiness that gives the piece its sense of contained yet profound grief. This dotted-rhythm section is followed by the most sublime of melodies, a voice from heaven. Though Glover’s beautiful tone demonstrated in the Berceuse was on display again, a more ethereal touch would have been appropriate, especially in contrast to the heaviness of the earthly grieving that surrounds it.

Certain aspects of the second half were an improvement over the first. Choosing a recital program is an art in itself, and Glover’s structure for the second half was far more organic than the first. Granados’ ‘Goyescas’, of which Glover played the final two pieces, are perhaps the only works for piano that were later turned into an opera by Granados himself. The last set was the opposite: transcriptions from Wagner’s opera ‘Die Walküre’.

Glover seemed most at home in the Granados. His enthusiasm for the Spanish composer was apparent in the comments he made before and after he played, relating the context for the Goyescas as well as the strange tale of Granados’ death (the ship on which he was returning to Europe from the United States was torpedoed by a German U-boat. Granados escaped on a lifeboat, but jumped into the water to save his wife and was pulled to his death by a sack of gold he had received as payment for playing at the White House.) Glover especially seemed to enjoy the improvisatory nature of ‘Love and Death, Ballade,’ a reminiscence of themes from the entire work. The Wagner was plagued by many of the same problems of earlier pieces, though amplified by the sheer technical difficulty of these transcriptions, in which the pianist is asked to recreate the sound of an entire Wagnerian orchestra. Especially in the ‘Ride of the Valkyries’, the famous melody was far too harsh, lacking the roundness of the brass sound from the orchestrated version.

Glover certainly has an impressive background and a career that would be the envy of young pianists—a master’s degree from Julliard, a Carnegie Hall recital, regular engagements with San Francisco orchestras, experience teaching in excellent music programs and eight CDs recorded to date. Technical perfection is by no means the only quality by which a musician should be judged. But with other pianists offering just that, as well as stunning musicality, Glover is in danger of being left behind by his peers.

Concert discount for Friends of TFI: Music of Love and Death by Daniel Glover