Concert Review: Esplanade Presents: At the Concourse The Stoney Cats 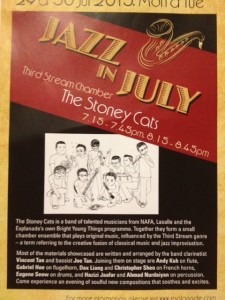 Esplanade Presents: At the Concourse

by The Stoney Cats

All compositions by Vincent Tan
A Short Introduction

The Forest of Truth

In the age of shrinking budgets that threaten the vitality of the arts, community outreach efforts and programs have become crucial segments arts organizations’ programming. Though we are fortunate in Singapore that the arts are well-funded, getting audiences into concert halls is never easy when recordings are so easily available online. This makes events like the Singapore Symphony Orchestra’s Casual Concerts, the Singapore Lyric Opera’s annual Opera in the Park concert, or the Esplanade’s free At the Concourse series all the more important.

Unfortunately, performances like the Stoney Cats’ do not make much of a case for jazz or classical music. The concert was advertised as ‘third stream,’ a combining of the jazz and classical genres, but the links to classical music were tenuous if at all existent. Calling a song ‘a piece,’ as the ensemble’s co-director Vincent Tan corrected himself, does not in fact make it third stream. Neither does linking the habañera rhythm of the third piece performed, the Cuban-inspired ‘Danzón no. 1,’ to the habañera (“L’amour est un oiseau rebelle) from Carmen make it third stream—in fact that would probably make it closer to Latin jazz.

Both Vincent Tan’s introductions to his compositions, such as explaining that the fourth piece “The Forest of Truth” was named so because it “just sounds like it,” and the performance itself were unconvincing. Two of the elements that make jazz so appealing are its syncopated, off-beat rhythms and its improvised solos, and neither aspect was particularly well executed.

The group’s three last pieces, ‘Danzón no. 1,’ ‘The Forest of Truth’ and ‘The Last Tango’ all featured catchy dance rhythms, but they continued unaltered and uninterrupted throughout without percussion solos to break the pattern. In fact, only three of the ensemble’s nine members played solos at all, Vincent Tan on the clarinet, Andy Koh on the flute and Gabriel Hoe on the flugelhorn. Of these, the clarinet solos were the most appealing, especially in the first piece ‘A Short Introduction,’ but the others were unimpressive. This was due in part to the fact that the ensemble’s poor communication did not leave the soloist much time to build up to an impressive, virtuosic finish; the formation in which they were standing made it difficult to give effective cues as well resulting in a rigidity at odds with their music.

Nevertheless, the concert was well attended, with about 30 people seated through the performance and perhaps another 30 that floated in and out through a nice, short sampler for the after-work crowd.  Though the calibre of the performance could be improved, such outreach performances are excellent opportunities for young talent, and there is no doubt that they must continue and increase in frequency.