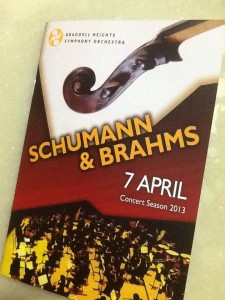 Brahms and Schumann are so often programmed together in concert that comparisons are inevitable. But while they both wrote similar works across numerous genres, from art song to chamber music to orchestral pieces, their musical voices are so distinct that it is difficult to mistake one for the other.

Masterpieces by both composers formed the core of this evening’s performance, which marks the BHSO’s first performance at the SOTA Concert Hall as well as their musical director Adrian Tan’s second performance as director with the amateur orchestra. As seems usual now, Tan prefaced his performances with introductions to the works, endeavouring to create a friendly environment for those new to the symphonic concert.

Following a well-paced, sparkling performance of Haydn’s overture that hummed along swimmingly (though I think the development could have had a wee bit more propulsion), showing off the orchestral strings to great advantage, the band launched into Brahms’ towering concerto with Yew Shan as soloist.

It was the first time I had heard Yew, but with credentials such as his appointment as concertmaster of the Asian Youth Orchestra by Yehudi Menuhin, I had high hopes. They were amply fulfilled in a musical, exciting performance of the concerto. Shaky opening bars aside, the orchestra’s confidence built up in the introduction, here taken at a moderately slow pace. By the time the solo violin made its appearance, things were ready to roll.

It is easy to focus on the technical difficulties of the piece and lose grip of the overall structure of the first movement, especially with all its repetitions, but Yew’s strong grasp of the long line and his command of the Brahmsian phrase, right from his d minor entrance, helped guide the orchestra through its great length.

While conservative and not given to virtuoso outbursts, his playing displayed sensitivity and lyricism – a musician’s performance, treading that thin Classical line that defines Brahms. His sweet tone and spot-on double stopping were clear for all to hear in Joachim’s cadenza, and it wasn’t a surprise when certain members of the audience broke into applause at the movement’s conclusion.

His appropriately improvisatory playing went right to the autumnal heart of the second movement, with principal oboe Makiko Kawamata’s creamy tone making a lovely entrance, even if it missed that last drop of bitter-sweetness. The finale, taken at a quick pace, danced and sparkled with renewed energy, with Yew missing not a note in the mix and bringing the concerto to its life-affirming end.

Apart from an oddly errant and very distracting horn section in the Adagio, the orchestra, with Tan leading enthusiastically, did well too, often creating great excitement in some of the more extrovert passages, though better attention to the softer passages would have made it even more enjoyable.

Despite its place in the repertoire, Schumann’s Rhenish symphony has never quite cohered for me in its disparate movements and it takes a special persuasion to make it click for me. Tan brought a lot of energy to the podium with his rendition, but after a strong, soaring exposition – more maestoso than allegro, tension lagged in the development and the coda could have had more fire. Here, as with the rest of the symphony, the brass seemed at times reticent – a lack of confidence perhaps?

Spirited playing was evident in the second movement, which sounded like proto-Wagner in places, with a rather ably-played horn variation and a charmingly-played trio. The funereal fourth movement made the strongest impression of all, with he brass choir (and trombones) here making their mark, especially in that fanfare (certainly Mahler must have been influenced here). In the joyful last movement, the orchestra responded quite sensitively, rallying to its triumphant end.

This, the first concert of the BHSO at the SOTA Concert Hall stood in stark contrast to its last at the SCO Concert Hall – the acoustics, while slightly ‘wet’, are so much better and more flattering to the sound of the symphony orchestra that I was astonished at the difference in sound produced. Sound aside, the orchestra is showing signs of developing an ensemble, and it will be interesting to see how they and their conductor progress from here.