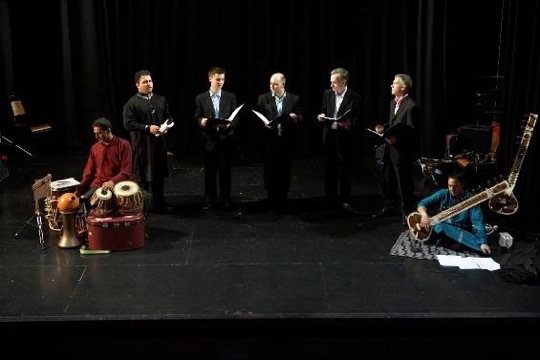 Faddish fusion or historically informed reconstruction? While publicity posited as colonial juxtapositions, these performances were mostly new compositions, intending to inject some fun into the sometimes po-faced early music business.

The Orlando Consort needs no introduction to those interested in medieval and renaissance polyphony. Pioneers who merged the flurry of British scholarship in early music together with extensive experience in sacred music afforded choral scholars in English cathedrals and chapels, their recordings from the 1990s have been landmarks in the field. Why then risk the opprobium of fans by venturing into cross-over? Sometimes, musicians are not immune from wanting a challenge, especially if it means sharing and learning from other professionals who normally work at a tangent. The catalyst for this collaboration was the dismissal from participation from a music festival because it had a South Asian theme. Did European polyphony have nothing to do with the New World? 17th century manuscripts from Latin America have shown the flourishing of Spanish sacred music in churches there, adapted somewhat to local needs. Similar notated evidence is lacking in India, but witnesses do describe the use of local instruments and local melodies in church services in the 16th century. What would be required is a radical re-imagining of the confluence.

The ideal partners for this might be traditional Hindustani classical musicians, but their training is notoriously hidebound. The partners the Orlando Consort found were Indian artists keen on adapating Indian instruments and styles to interact with Western ideas: Jonathan Mayer, conservatoire-trained musician, sitarist and scion of Indo-Jazz fusion pioneer John Mayer; Kuljit Bhamra, self-taught tabla player and Bhangra pioneer; and young singer Shahid Khan. Perhaps inevitably, what ensued could not be seriously described as historically-informed. It was more musicians riffing at the letdown after working though a music festival: adding Bhangra beats to a Notre-Dame organum, embellishing an Escobar motet with Hindustani vocal technique, and mixing religious texts and musical themes somewhat indiscriminately.

The most stimulating composition was an attempt at using an alternatim structure, chant alternating with polyphony, to sketch out how the Salve Regina chant in the Dorian mode might modulate into Kirwani raga. Each side also performed one item straight: the Orlando Consort’s rendition of Guerrero’s Quae est istae was deeply moving, despite the dry as dust acoustic in the National Museum Gallery. The raga rendition by the Indian musicians was by necessity severely truncated, from the normal 2-3 hours to a few minutes, with rather unorthodox sitar technique by Mayer and earnest but immature vocalisation by Khan. The concert ended with audience interaction call and response melange led by Khan, who got into the spirit of mixing it all up by being moved to modern club dance moves on stage. Kuljit Bhamra then invited all to come up and try out the instruments; how many people can say they’ve been taught to play by an MBE and DMus?

are beautiful, classic designs made for sophisticated customers to make an emphatic style statement. google