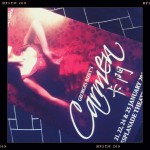 Chorus of the National Centre for the Performing Arts, People’s Republic of China.

Sung in French with English and Chinese surtitles

Carmen may well be the most overplayed opera in the world, but it’s a hit with audiences for good reason, and in the right hands it can be pure unadulterated pleasure. Bizet’s tunes virtually play themselves and the balance between the comedic and dramatic elements has perhaps never been matched. 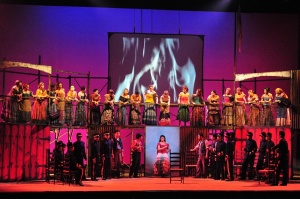 Apart from a few solo flubs here and there, it’s not an exaggeration to say that the orchestra has never sounded better. even more so than in the last production, Die Zauberflöte. Tan’s fairly straightforward and clear leadership, cueing when needed, clear-headed balancing and sensible choice of tempi without being boring really kept the proceedings going musically, even if one might argue with Wagnerian-richness of the brass, while the all the choirs in question sang lustily, even if there were opening night jitters in the parade scene.

Among the soloists too, mezzo-soprano Sophie Fournier, with her surprisingly large voice in the higher tessitura, proved a credible title lead, though her passagio and low notes sometimes gave her problems. In terms of vocal acting, she did well to characterize the range of emotions that the role brings her through, and her arias were hugely enjoyable.

Her co-lead, Korean Lee Jae Wook as Don José again brought his seemingly indestructible and very dependable, slightly baritonish voice to the fore with some charm and considerable passion, while at the expense of lyricism, though his dynamic range seemed limited between ‘loud’ to ‘very loud’. while Li Yang as Micaela seemed to channel the voice of her teacher Nancy Yuen at times with dulcet notes, even managing to look like her last Mimi, though above the stave her voice seldom bloomed in her solo arias and her highest notes were sometimes shrill.

China bass-baritone Huang Rong Hai as Escamillo, though hardly imposing physically, was vocally convincing without dominating and sweeping the stage the way some of the best singers can, while all the smaller roles were delightfully sung and acted, sometimes to the extent of overshadowing the leads.

But directorially, this production was a bit of a mixed bag. Carmen seems to defy updating, and David Edwards’ efforts to make it his own didn’t quite work. A three part double story structure with flights of stairs on either side se

rved as the backbone of the rather sparse stage and walled off a central section which alternately served as the town square, the tavern and others. Above the middle section hung a screen on which various images were projected. I’m not sure what his intention was, since he doesn’t discuss it in the notes included in the program, but it was frankly quite distracting, and I’m not sure what addtional angle it added to the audience’s understanding of the story.

To give you an idea of how random these images were, during the Habanera a photograph of a wave was shown, in another scene a picture of two candles, in another a flame, while in yet another, Delacroix’s famous painting ‘Liberty Leading the People’ was projected, though curiously not in the ‘liberte’ chorus.

The dual storey structure, designed by the director, (not unique, the Royal Covent Garden production on DVD starring Anne-Sophie von Otter uses one too) allowed for some layering of voices and some creative blocking. Its use throughout the whole opera, without bothering to distinguish it much from one scene to another, though from a budget point of view unarguable and even desirable, lent a slightly dull sameness to every scene, which the dingy, unpredictable lighting by Lim Yu Beng didn’t help. And by the way, mirror ball?  Seriously?

The costumes, colourful and cheerfully flamboyant as they were (at least those on the women), remained quite conventional, with Carmen herself predictably in a slightly ragged red low-cut dress, which suited me just fine (the conventionality, not the cut of the dress)

What was a little baffling were some of the directorial decisions. Certainly, when Carmen first emerges, she doesn’t have to be dancing the habanera, as some have made her do, and to some extent just sitting in her chair parting her legs provocatively underneath her skirt tells us a bit about the woman she is. But when Bizet first envisioned Carmen, I doubt he thought of her as rolling about over and over again in the tavern when trying to seduce Don José to stay with her, a move that elicited wave after wave of laughter.

Other scenes I thought could have been better done involved the chorus – in the Habanera, as well as the tavern dance `Les tringles des sistres tintaient’ the men seemed rather uninterested and passive at the supposedly seductive gypsies. This particular dance, though featuring really characterful costumes, didn’t ignite until the final, frenetic section.

Elsewhere, David Edwards chose to retell the story – to its detriment. For example, in Act I, the soldiers are never seen to change the guard, which makes the comment from the earlier company ‘Don José isn’t from our company’ sudden and unexpected (he’s supposed to be one of the incoming guards), and his sudden entry when Carmen makes her appearance bemusing. The children too, play at being guards; in some productions the imitate them in exchanging mock-rifles and mock swords, but that’s largely an interpretive choice. There could have been a lot more done with the children, who seem largely up to the challenges of the music.

Another example: much of the story hinges, too, on how Carmen bewitches Don José by throwing the flower at him while he doesn’t seem at all interested. The Habanera, after all says, ‘if you love me not, then I love you’ and ‘when least expected, there it is!’. Edwards makes Don José come up in the midst of the whole male crowd and start to caress Carmen, which makes the words of the Habanera lose their meaning. Also she places the flower in his hand rather than throwing at him, which is implied in the music as well as in the libretto.

Another example: After Carmen stabs the other cigarette girl and she’s left alone with Don José, she was  not tied up but allowed to dance around Don José, who again can’t resist copping a feel. This is the scene in which she seduces him, sure, but with her words, surely, rather than brazenly riding him in Edward’s version. Basically I think this took away from the essential high-bred ‘Don’ or nobleman origin of José, and it debased Carmen.

The last scene, where José confronts Carmen was odd for all kinds of reasons. Firstly, José looked as if he was going through convulsions at points (he was probably supposed to be going crazy), which I can accept. But the two seemed to argue with each other long distance. Carmen, dressed like a WAG, was seated on a white chair just off the left (from the audience) of the centre of the stage, while the bull-fight was stage right. Jose, on the other hand was stage left and stayed there. At no point in his pleading/cajoling/threatening did he seem interested to speak to Carmen face-to-face.

Carmen, as well, seemed content to await her fate from her chair. (By the way, another irregularity – in the card scene she walked slowly toward the cards. Before actually reaching the cards she seemed to know her fate. You have to take your hats off to such clairvoyancy) While her words said to ‘ let me pass’, which directors usually take to mean that she wants to go toward the arena but José is blocking her way. José’s actually on the opposite side of the stage, and so in no position to block her anyway.

In a final strange directorial decision, Carmen steps into a conveniently placed coffin to her left after she sings her last line before José has even come across the stage to stab her – a move of resignation which I find again at odds with that basic head-strong nature. Would some one so in love with liberty just settle, step into a coffin and lie down? I find that hard to accept.

So then, a musically very strong performance with unfortunate decisions on the director’s part. Not enough to spoil my Carmen experience, but it raised points certainly worth thinking about.  Two more aspects are worth talking about – the surtitles this time around were the most perfectly synchronized I have ever seen. Bravo to the operator! The second thing is that instead it’s the first local Carmen I’ve seen where the dialogue wasn’t in English – a HUGE improvement from other productions where the spell of the theatre was broken by the abrupt language change. Also, the fluency of everyone involved (though I note that cuts to spoken dialogue were made) was simply stunning. Singapore Lyric Opera may not be at the top of the opera game and with its limited budget and limited audience may never reach it, but it’s taking steps each time to reach it and they deserve an ‘A’, certainly, for effort. I look forward with great interest to their next production, ‘Salome’. 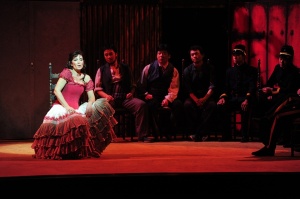