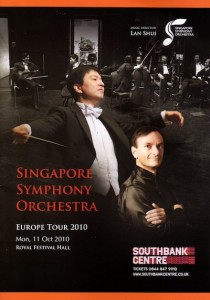 Zhou Long The Rhyme of Taigu

Rachmaninov The Isle of the Dead, Op. 29

It is with plenty of fanfare, and a good dose of publicity, that the Singapore Symphony Orchestra embarked on their first European tour, beginning here in London at the Royal Festival Hall.

Lan Shui, their music director, has much to be proud of. Credited with transforming the SSO, during his thirteen-year tenure, from a serviceable regional band to an internationally recognized orchestra, the Chinese-American conductor has demonstrated his orchestra-building skills, sadly wanting in the current breed of jet-setting conductors.

He has also proven shrewd, securing recordings with BIS concentrating on exotic rarities and Far Eastern composers, some of which have garnered international acclaim, as well as improving the orchestra by bringing a large number of well-trained musicians into its ranks.

With its cosmopolitan mix of Singaporeans, Europeans, Australians, Americans and Chinese reflecting Singapore’s complex demography, the orchestra’s pride in these achievements was evident in tonight’s concert; many appeared delighted simply to be playing in London. Patently designed to show off the orchestra’s improved technical prowess, Lan chose a challenging line-up that would have been impossible in 1997
when he took over as music director, where he played a conservative all-Beethoven programme at his inauguration.

This far more ambitious concert, based loosely on the sea, opened with promise, thumping into Zhou Long’s 2003 composition The Rhyme of Taigu, an evocation of ancient Chinese drums and temple music, although the eddies of a turbulent river could also be heard, in keeping with the programme theme.

Reminiscent at times of John Adams, with percussion and timpani dictating the direction of the piece, and at times of a Stravinsky drunk on kitsch chinoiserie, Zhou Long perhaps struggles in his composition to find an independent voice, but manages in spite of that to generate plenty of excitement and tension. Clearly well-rehearsed, the SSO played with aplomb and near-perfect execution—the principal percussionist and timpanist Jonathan Fox outstanding here—affirming their reputation in the growing body of East-West pastiche repertoire.

The inclusion of Mendelssohn’s first piano concerto in the concert was perhaps more curious, jarring stylistically and thematically with the rest of the programme. One detects in this choice the hand of British pianist Stephen Hough, in his tireless advocacy of lesser-known pieces of the piano repertoire.

Hough blazed through the performance with typical energy and concentration, ably supported by the SSO, although this listener found his brittle tone, so effectively exploited in later Romantic works, unsuited to this piece’s gushing early Romanticism. Valiant though his efforts were, this listener remains unconvinced of the merits of this often banal work. Perhaps some compositions are best left consigned to the bins of obscurity?

In comparison, the musical worth of the works in the second half has long been appreciated, and it was these compositions that truly put to test claims of the SSO’s transformation under Lan Shui.

Rachmaninoff’s The Isle of the Dead and Debussy’s La Mer have felled greater orchestras and confounded greater conductors. In both, the SSO’s improved playing standards were evident, with certain sections, particularly the celli and woodwind, developing a distinctive sound. In both, however, this listener was also left cold.

This may have been due in part to the sometimes messy ensemble, amidst the doubtless individual virtuosity, an unfortunate distraction since target rehearsals would have easily solved them. What is far more difficult to address, however, is Lan Shui’s own command of the orchestral sound-world and his ability to stamp his own interpretative mark on a composition.

Subtlety and colour were lacking in these performances, crucial in a piece like La Mer, which relies on the conductor achieving the correct balance between orchestral sections.

Ham-fisted and monolithic, Lan’s approach sounded forced, with each section competing to drown the others out. The build-up of musical tension—which requires careful manipulation of dynamics, tempi and phrasing—was poorly executed in both The Isle of the Dead and La Mer, with the conductor simply expecting the orchestra to play ever louder.

The overall effect was episodic, with lurches from one development section to the next in a dizzying and frenetic spell, upsetting the structural integrity and musical argument central to both compositions.

Yet, in spite of the apparent intensity, passion and spirit were paradoxically absent from the performances. Lan came across as mechanically cold, not itself a vice if polished into a virtue, as Pierre Boulez and Michelangeli have demonstrated. What is crucial was Lan Shui’s failure to locate the underlying spirit of a composition, and to filter it through his own. Rachmaninoff’s The Isle of the Dead sounded incongruously Mahlerian—perhaps because the conductor was still living the memory of his own recent Mahler 10 recording, while Debussy’s La Mer was violently severed from its early twentieth-century Impressionist roots.

It is clear from his achievements to-date with the SSO that Lan Shui has the potential to be a very successful conductor, having in his possession that rare blend of management skills, ambition and patience that are pre-requisites for leadership. However, having painstakingly improved the technical standards of his orchestra so that they are no longer a focal point in performances, his own shortcomings as a musical interpreter have ironically become all the more apparent.

Lan Shui has shown that he can build an orchestra. He now needs to demonstrate that he can be a great conductor too.

Tchaikovsky Variations on a Rococo Theme

Rachmaninov The Isle of the Dead, Op. 29

keep up the good work