Sergei Rachmaninov The Isle of the Dead

If there are any concerts that deserve a mention for having diverse and varied programming, the Singapore Symphony Orchestra’s performance of ‘Ode to Ireland’ ranks as one of them. This was a rather odd choice of programming, starting with an overture, followed by a concerto, a symphonic poem, and yet another overture. Notwithstanding the eschewment of the tired format of overture, concerto and symphony, sandwiching two works with darkly morose themes of death and suffering in between two cheerfully triumphant overtures leaves one wondering if there was a message that one should always remain optimistic despite whatever trials and tribulations we may encounter in life.

The Candide Overture by Leonard Bernstein started off with an appropriate tempo that moved briskly without being overly rushed, and ensemble playing was watertight throughout. The woodwinds, brass and percussion impressed with their enthusiasm, the American training of many of their players brought aptly to the forefront with a sharply textured bite reminiscent of seasoned Broadway musicians. The ensuing lyrical passages from the strings, while providing much beauty and warmth, was rather restrained throughout. It is rather unfortunate that not all members of the  orchestra felt that they could all let their hair down for this piece, but it was a very enjoyable performance overall. 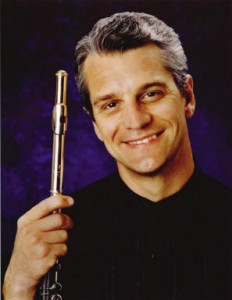 Christopher Rouse’s Flute Concerto was preceded by a cheerful and intellectually informative introduction from Maestro Lan Shui and soloist Mark Sparks (pictured, right) For  members of the audience listening to this work for the first time, the scenic opening reminded one of numerous film soundtracks depicting the lush green moors, hills and gray blue skies of the British Isles, full of spiritual contemplation. The middle movements were full of haunting beauty, with lots of virtuosic sparring between soloist and orchestra, and concluded with a collage of lovingly executed textures. While extremely well played by both soloist and orchestra, the constant display of orchestral and flute pyrotechnics at times obscured the clarity of form for this composition.

Many late Romantic or pre-World War I works carry an air of heavy sadness mixed with nostalgia for a rapidly vanishing era, and Rachmaninov’s ‘The Isle of the Dead’ was no exception. The SSO was in top form during the evening, and the transcendental beauty of this work was deeply felt.

The 1812 Overture was indeed a rare treat for the evening. Very seldom performed with a full choir, what more singing in the Russian language, excited whispers amongst the Russian community in the audience could be overheard prior to the commencement of the performance. Both the choir and the orchestra did not disappoint. The opening of the overture, normally played by an entire cello section deployed as a cello choir, was replaced by a live choir of human voices. The choir reminded one of the prayer chants of the Eastern Orthodox Church, and there was enough suspenseful tension to keep the audience glued to the edge of their seats. The orchestra’s playing was full of energy and excitement, and they certainly did not disappoint. Perhaps the only let down of the of the evening would be the sound of the “cannon”, which sounded rather hollow. Personal opinions aside, the jubilant cheers and bravos from the audience brought the concert to an exciting conclusion.

How on earth is that an “Ode to Ireland”?

Thank you for your comment – we find it hard to understand these titles ourselves!

We do hope you have enjoyed reading Inkpot.