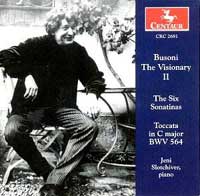 If there were a special prize for musical understatement of the 20th century, it ought to be awarded to the six Sonatinas of Italian composer-pianist Ferruccio Busoni (1866-1924). Rivaling Brahms’ a “few little pieces with a wisp of a scherzo” which Brahms described his Second Piano Concerto (the 19th century’s outright winner), these 50 minutes or so of the most intriguing piano music to be heard since Beethoven’s late Sonatas are a far cry from Schirmer’s Sonatina Album, beloved of budding young pianists.

The six single-movement essays were so named to differentiate them from Busoni’s very own Sonata in F minor, a 30-minute work. The heterogeneity of the Sonatinas themselves makes them extraordinary, endlessly interesting works. With the famous exception of the Sixth Sonatina (the Chamber Fantasy after Carmen), they are virtually neglected. That is probably because only Busoni specialists play and record them as a group. Busoni specialists virtuoso pianists to be certain – are not born, but like apostles of the faith, anointed. 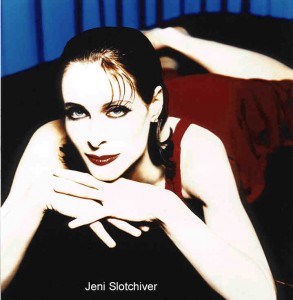 I do not know whether Busoni’s Apostle Peter, the Dutch master Egon Petri has recorded the entire set but I have been more than satisfied being proselytised by the late-lamented Paul Jacobs, whose definitive recording on Nonesuch has recently been reissued on the Arbiter label. His performances allied a razor-keen intellect, fearless virtuosity with missionary zeal; I was converted almost immediately. Now meet Jeni Slotchiver, an American pianist whose name is totally new to me, who carries on the tradition with the same persuasive powers.

First off, some thumbnail intros to the Sonatinas. The first two Sonatinas look forward to the creations of Schoenberg, and to these ears, the most interesting. The First Sonatina is a phantasmagorical composite of three earlier pieces from Busoni’s An die Jugend, a suite that is anything but childlike. The Second Sonatina is the most modern, almost (but not) atonal, violent in intent, and bristling with rhythmic and harmonic complexities. The Third Sonatina has the suffix for the use of a child; it is childlike and naïve in its feel (like characters of a puppet play) but certainly not child’s play.

The Fourth Sonatina, another harmonically intriguing piece, was written for Christmas 1917, a plea for the end of the Great War. The Fifth Sonatina is a free transcription of Bach’s Fantasia and Fugue BWV.905, in the best tradition of hyphenated Bach. Finally, the Sixth Sonatina or Carmen Fantasy is a showstopper in the Lisztian mould, employing popular melodies from Bizet’s opera, most importantly the death theme, Flower Song and Habañera. Unsurprisingly, recordings of the Carmen Fantasy by far outnumber those of the other Sonatinas.

What of the performances? Jeni Slotchiver is armed with an iron-clad technique that quite comfortably surmounts the very stiff challenges presented by the composer. The Sonatinas do not sound like technical nor intellectual exercises, rather mini-fantasies that she colours with a wealth of responses and insights. I particularly appreciated the haunting and mystical atmosphere she recreates in the First and Fourth Sonatinas, pieces which could have easily degenerated into a laborious play-through. The visionary Second Sonatina could have done with more venom in its bite and there have been more outwardly virtuosic readings of the Carmen Fantasy (notably by John Ogdon and Marc-André Hamelin). These minor quibbles aside, the performances are nothing short of satisfying. In summary, she is every bit the equal of these masterful creations.

As a bonus, there is a fine performance of Busoni’s transcription of Bach’s Organ Toccata (Toccata, Adagio and Fugue) in C major BWV.564, the same work which Vladimir Horowitz played in his famous 1965 Carnegie Hall recital. There is a sense of strain and struggle in the mighty Toccata but that is more than made up by the wonderfully serene Aria and jaunty high spirits of the Fugue. Good as this reading may be, those by Horowitz (Sony Classical) and Nikolai Demidenko (Hyperion) still deserve a special place in any collection.

What should also not go ignored are the very detailed and well-researched notes for the programme that gives the listener a complete historical background to the music. No other recording (not even the now-deleted Geoffrey Douglas Madge’s 6-disc box set on Philips) is as exhaustive in its coverage. Count yourself a minor authority on Busoni (at least in your office building or neighbourhood) after reading the booklet, but first enjoy the music!