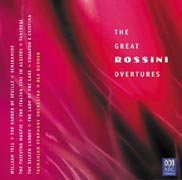 A sculpture can never be seen from all sides at once; despite this, all its sides are worked out to the same degree. Almost all composers proceed in the same way when handling the orchestra – they realize even details that are not under all circumstances going to be audible.

Thus wrote Arnold Schoenberg on the challenges of orchestration.With no shortage of Rossini overture anthologies available in the catalog (and some yielding extraordinarily fine performances indeed), yet another collection jumping into a crowded pool might seem like a wilful act of redundancy. There is admittedly no shortage of eminently recommendable anthologies of Rossini’s (pictured left) overture music, not a few of which are competing on both price, mid-range and budget, as well as performance.

But I’ll tell you why this new release compels our listening: Rossini’s picturesque orchestrations often contain important textures which have changed significantly as instruments evolved into their current-day incarnations, and the weightier approach by many full-sized symphonies don’t always give the best representation of the composer’s writing. For example, players (or worse, conductors) often fall prey to the temptation to unduly highlight a section to the detriment of the overall balance. Or, as Schoenberg so astutely points out, sometimes even under the best circumstances, the loss of detail is inevitable.

The use of a precision ensemble, such as a group as surgical and dexterous as OlaRudner and his stylish Tasmanian Symphony musicians, perhaps goes some way to ameliorate the problems of clarity faced by larger bands. It is from this standpoint that we get a refreshing new look at old repertoire in this classy collection of nine evergreens from Rossini. These are smashing new interpretations from a modern band which tips its hat to its predecessors – it contains a bit of Reiner’s electricity, Menuhin’s flair, Levi’s colours and Marriner’s fastidious precision, all of which is topped off with Rudner’s own characteristic lightness of touch.

The Tasmanian Symphony Orchestra have been making some inroads into the catalog: they’ve been recording for Chandos and Hyperion under guest conductor-soloist Howard Shelley, and have also recently embarked on a campaign to systematically document the symphonic works of major Australian composers with ABC Classics. This is a disciplined group of musicians which respond to Rudner’s direction with finesse: listen to the solo woodwinds inThe Barber of Seville or The Silken Ladder, or the articulate brasses in Semiramide. The string playing is first-rate, smart and opulent. 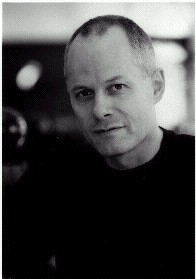 Rudner (pictured left) has clearly thought through very carefully about what he wants to do with this music, and it shows in his quicksilver turns of tempi, touches of humour and bags of incandescent energy. He infuses, for example, each of the “movements” in the four-section overture to William Tell with its own character, aided by superb solo instrumental playing: the brasses in the storm perorate with some menace, and the famous cavalry gallop at the conclusion is simply brilliant, in more than one sense of the word.

In the debit column, the familiar ambience of the Federation Concert Hall in Hobart is a bit too spacious for this music, and the low sonorities tend to be a bit bottom-heavy, clouding the basses in shadow (especially pronounced during thefortissimos). A bit more, I think, could have been done to balance out the sonorities and eliminate the “large empty hall” acoustic, but the sound is otherwise quite amply atmospheric. The only other drawback, it might appear, is this album’s full-price retail cost, which makes it uncompetitive against the other mid-range, budget and even ultra-budget Rossini collections in issue. Then again, Erin Helyard’s erudite program notes are among the best as any I’ve seen in any release, and that exemplary quality counts for something, too. Definitely a worthwhile addition to the catalog.